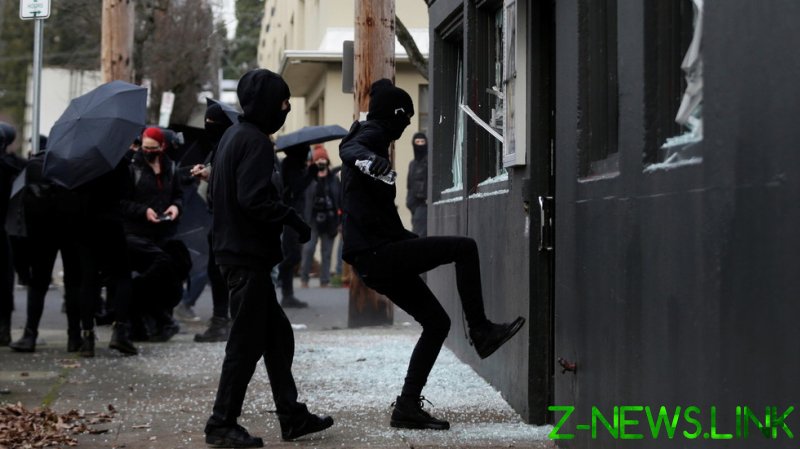 Wheeler said the emergency declaration would continue through the weekend during a Friday press conference, first imposed on Tuesday after ex-Minneapolis cop Derek Chauvin was found guilty of the murder of George Floyd. The mayor pointed to concerns of violence from demonstrators who’ve taken to the streets on dozens of occasions since the 46-year-old was killed in police custody last May.

“They want to burn. They want to bash – like they did to the nonprofit Boys and Girls Club in Northeast. Really, they want to intimidate. They want to assault,” Wheeler said, referring to an incident on Monday which saw activists inflict nearly $20,000 in damage on a local community center during an anti-police brutality protest.

The mayor also called on city residents to help identify and “unmask” violent protesters, thanking members of the public who’ve already passed “vital evidence” to police, adding that the city is working with county, state and federal officials to “stop the self-described anarchists’ mayhem” and “take our city back.”

“I also want you to know that these people often arrive at their so-called ‘direct actions’ in cars, and they’re all dressed in all-black,” Wheeler continued. “If you see this, call the police. If you can provide a license plate… that information can help later. Together, we can make a stand.”

The city’s acting police chief, Chris Davis, also weighed in at the presser, vowing to arrest anyone engaged in vandalism, arson or violence, specifically referring to a protest planned for Friday night at Portland’s Couch Park.

Davis also noted that the local district attorney, Mike Schmidt, is now reviewing cases against protesters that were previously dismissed, saying charges could be reissued for repeat offenders “where appropriate.”

Last week, the Wall Street Journal reported that nearly half of the federal cases against Portland demonstrators had been dismissed since last year’s wave of protests, while Schmidt reportedly declined to charge “hundreds” of those arrested amid the unrest, many for petty crimes.

Wheeler’s call to action quickly triggered objections from the local ACLU branch, which said he “encouraged vigilantes” to go after anyone “wearing black clothing.”

Online observers also protested over the mayor’s comments, some suggesting that those attending funerals in black attire, or working as restaurant wait staff, would be confused for violent activists by over-zealous residents.

While Wheeler previously took a softer stance on the protests – barring police from using tear gas on demonstrators last September, for example – over time he has adopted a harder line. By January, the mayor finally vowed to clamp down on “anarchist violence” after “good-faith efforts at de-escalation” had failed. The announcement came after nearly 200 consecutive days of protests and rioting around a federal courthouse in Portland, which kicked off last May after Floyd’s death in police custody, seeing countless clashes with officers, and acts of arson and vandalism.