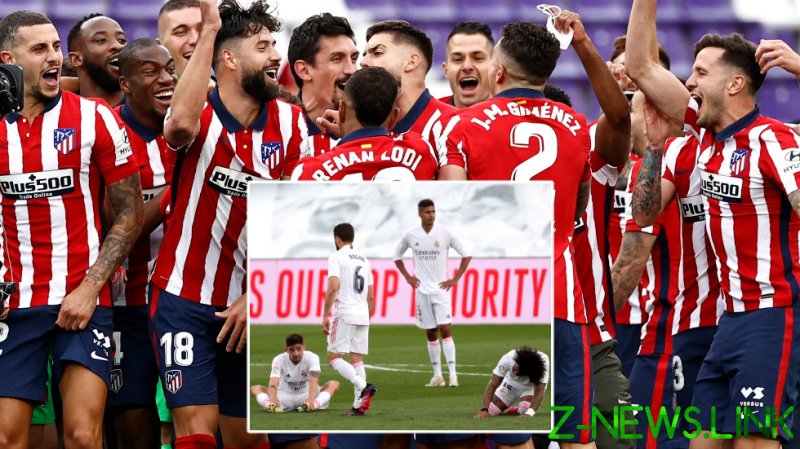 Playing away at the Estadio Jose Zorrilla, Atleti suffered a nightmare start, falling behind to the hosts on 18 minutes.

Putting together their best football of the season, ex-Real Madrid academy product Oscar Plano finished the move which gave Valladolid hope of survival.

Worryingly for Atletico, that also put the ball in Real Madrid’s court at home to Villarreal.

Set to face Manchester United in the Europa League final, Unai Emery’s men were expected to field a weaker team than usual.

Yet Villarreal’s lack of desire to finish in a position which could earn them UEFA Conference football next term had been underestimated by the Spanish media, and on 20 minutes disaster struck for Madrid boss Zinedine Zidane.

Beating goalkeeper Thibaut Courtois with a delightful chip, Yeremi Pino gave Atletico the luxury of going down the tunnel at half-time behind on the day yet still two points ahead in the table.

Stats oracle OptaJose noted that Atleti had lost the last three Liga games in which they had trailed at the interval, and whatever manager Diego ‘El Cholo’ Simeone had said in the changing room clearly worked, with his troops coming back out a different outfit.

While over in the capital Karim Benzema had a goal disallowed, Angel Correa equalized and put Atleti three points ahead of Madrid with a beautiful finish.

Ten minutes later, a run that many believe Luis Suarez started in an offside position was finished excellently by the Barcelona reject, who has now had the last laugh at his former club for paying him to leave during pre-season.

Tense scenes followed as Benzema finally found the back of the net on 87 minutes and Luka Modric clinched a winner in stoppage time to give Real Madrid a 2-1 victory.

Yet Atleti managed to hold on, cueing scenes of jubilation among Simeone and his players as devastated Valladolid’s devastated stars were sentenced to the second tier.

Flares were let off back home outside the Wanda, and the Rojiblancos sang ‘Campeones! Campeones! Ole Ole Ole’ before Suarez held goalkeeper Jan Oblak in a warm embrace.

Though slipping up at various points of the campaign, an Atleti side who were top of the league for 26 of the 38 matchday weeks are deserved rulers of Spain for the first time since 2014.

As critics predicted his exit in the event of Atleti fluffing their lines – which would have compounded their early knockout in this season’s Champions League – it is now Simeone’s opposite numbers, Zidane and Ronald Koeman at Barcelona, whose positions are under threat.

Shortly after Simeone was thrown up into the air by his charges, Suarez gave a teary interview to local broadcaster Movistar.

“It was tough in the summer, the way they [Barcelona] undervalued me, but I’ll always be grateful to Atletico,” he said.

“Five leagues in seven,” he noticed in reference to the recent winners of the La Liga title. “There’s Luis Suarez.”

“I know Messi will be happy for me. He wished me good luck the other day,” ‘El Pistolero’ said, before later seen sobbing heartily and making a video call presumably to his family.

Simeone said he was “happy for so many people.” “It was such a difficult year: friends, family members, fans who died – of Atletico and other clubs,” the world’s highest-paid manager explained.

“That Atletico comes out as champions this year is something extra special. It always costs us more.

“We’ve been able to bring joy for many people who have gone through such difficult times. The players have been enormous – I thank them so much, above all those who played less, but who made us a team, as we were in every moment.”

While some fans were captured in pockets of Madrid celebrating the win, Atletico will sadly not commemorate it with them at the Neptuno statue or from the town hall balcony because of Covid restrictions.

Instead, they will receive the trophy at a private ceremony held at the Wanda Metropolitano stadium tomorrow.

For a team of the people often playing third fiddle to Spain’s big two, the triumph remains no less sweet.