Home / WORLD / ‘They don’t look so Nice’: CHAOS in France as Nice-Marseille match abandoned after fans invade pitch in clash with players (VIDEO)

‘They don’t look so Nice’: CHAOS in France as Nice-Marseille match abandoned after fans invade pitch in clash with players (VIDEO) 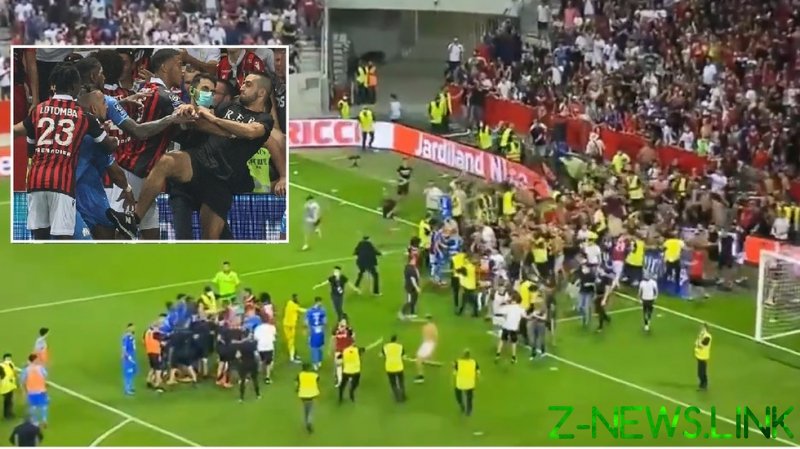 With around 15 minutes of the game remaining and hosts Nice leading 1-0 thanks to a Kasper Dolberg goal, Marseille star Dimitri Payet was struck by a bottle hurled from a section of the home supporters as he went to take a corner.

After falling to the ground, an enraged Payet got back to his feet and threw the bottle back into the stands, sparking carnage.

Unable to be restrained by stewards, Nice fans spilled towards the pitch, breaking through the barriers and eventually onto the field.

In the carnage that ensued there were scuffles between players and fans, while footage circulating on social media purported to show a member of the Marseille staff striking a supporter.

Livid Marseille head coach Jorge Sampaoli also had to be restrained by his backroom staff.

The match was suspended as both sets of players left the field and Nice president Jean-Pierre Rivere appealed for calm over the stadium’s public address system.

After a break of more than an hour Nice players returned to restart the game but their Marseille counterparts refused to do so, leading to the match being abandoned.

The disturbing scenes at the Allianz Riviera follow disturbances two weeks ago in a match between Marseille and Montpellier, which was held up when the pitch had been pelted with bottles and players from both teams were struck.

Marseille president Pablo Longoria said his players had been “attacked” by the Nice ultras on Sunday night.

He added: “This is the second time it’s happened. We have already experienced this in Montpellier where we decided to continue after the decision to carry on was made.

“What happened today is unacceptable. We must make it a precedent for French football and that’s why we decided to return to Marseille.”

His Nice counterpart Rivere condemned the scenes but suggested Marseille personnel had played a part in the disturbances.

“It’s disappointing that the game ended like this,” said the Nice official.

“Everyone saw what happened. We can’t deny that water bottles were thrown because we could all see it. What ignited the clashes was the reaction of two Marseille players who retaliated.

“Afterwards, it is deplorable that the Marseille security staff intervened on the ground and hit our players.”

French sports bible L’Equipe branded the incident “insupportable” on their front cover, while fans described the scenes as “shameful.”

“They don’t look so Nice,” quipped another fan of the Nice hardcore and their actions.

According to Ligue 1 rules, if a team fails to fulfil a fixture then they forfeit the game 3-0, although it’s hard to imagine Marseille accepting that fate considering the circumstances.