‘They can’t arrest us all’: Horse-mounted protesters steal the show at Australian anti-lockdown rally (VIDEO) 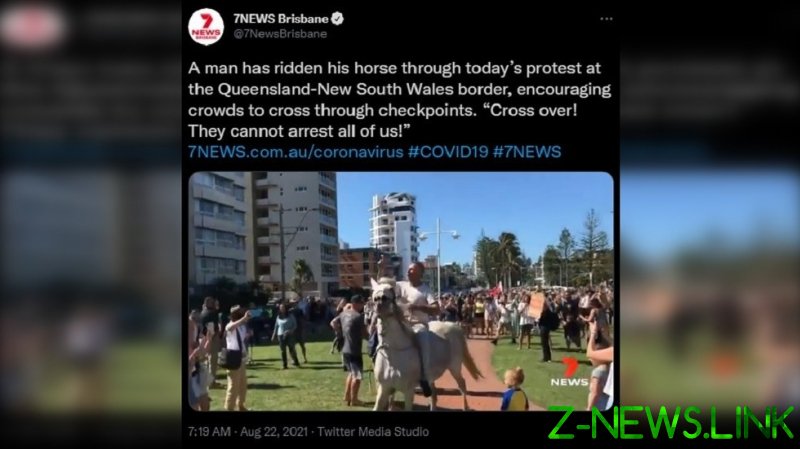 The epic scene was filmed in Tweed Heads on the border between Queensland and New South Wales (NSW), where around a thousand people gathered on Sunday to decry the ban on crossing state lines, introduced to stem the spread of the coronavirus.

A man galloped on a white horse among the demonstrators, while delivering a sort of a passionate pre-battle speech.

“Cross over! Everyone go across the border! Cross over! They can’t arrest us all,” the rider shouted, prompting applause and cheers from his fellow protesters.

Some people online found the video impressive or at least funny, while others pointed out that riding the horse into a crowd where there were kids was quite a dangerous thing to do.

Wallace was fighting for freedom, and people who took part in the rally insisted that they were doing the very same thing. The closure of the border with New South Wales, which remains the worst-hit state by the Delta variant, and other Covid-19 restrictions are “a direct attack on my freedom of liberty, freedom to move,” one of them told ABC News. Such measures will “break up of the Commonwealth of Australia” and signal “the end of democracy as we know it,” he warned.

However, the horseman’s calls were unable to inspire the people to storm the border after all. The rally in Tweed Heads concluded peacefully, unlike a much larger demonstration in Melbourne on Saturday, which was marred by clashes with police and over 200 arrests.

Australia, where at least a quarter of the population currently remains under stay-at-home orders, has seen a wave of protests against Covid-19 rules in the past couple of days.

The country’s most populous state, New South Wales, had recently extended its lockdown, while also introducing a night-time curfew for nearly a half of Sydney’s five million residents.

Despite the harsh measures, NSW has just recorded its worst day of the pandemic, with 830 new cases, three deaths and more than 900 people being fined for breaching health rules.

Overall, Australia’s Covid-19 numbers remain pretty low, with just under 44,000 cases and 981 deaths. However, Prime Minister Scott Morrison said on Sunday that the lockdowns will remain in place until at least 70% of the population are vaccinated. So far, less than 30% of Australians have gotten both shots of the vaccine.