Home / WORLD / ‘They can’t arrest all of us’: Rand Paul critics melt down as he encourages people to defy CDC & ‘drunk on power’ Pelosi (VIDEO)

‘They can’t arrest all of us’: Rand Paul critics melt down as he encourages people to defy CDC & ‘drunk on power’ Pelosi (VIDEO) 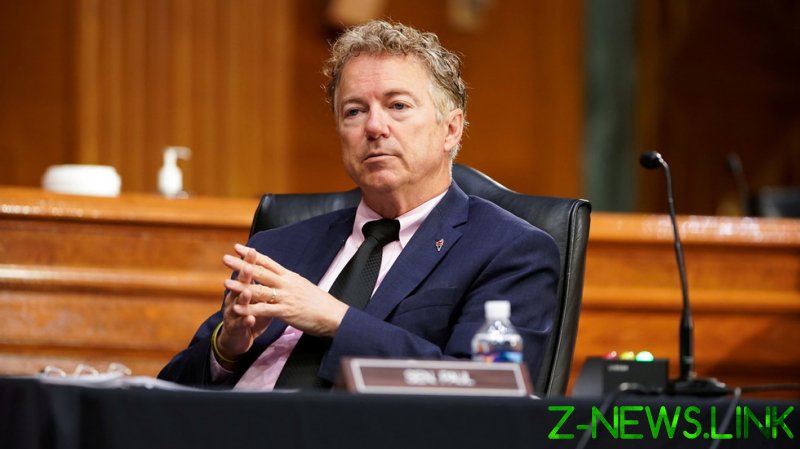 “It’s time for us to resist. They can’t arrest all of us. They can’t keep all of your kids home from school. They can’t keep every government building closed – although I’ve kept a long list of ones they should,” Paul said in the video posted to his Twitter account.

Paul has been one of the most vocal Republicans opposing proof of vaccination requirements and mask mandates potentially spreading across the US in the face of rising coronavirus cases.

The Centers for Disease Control and Prevention (CDC) have faced backlash, mostly from conservative critics, since updating their mask guidance recently to state that even fully vaccinated individuals should be masking up in public if they are in what is deemed a ‘high-risk’ area.

Cities such as Los Angeles have also seen mask mandates return in response to rising cases, which health officials have chalked up to the more transmittable Delta variant and lagging vaccination rates.

The new mandates that push people to get vaccinated come from “petty tyrants and feckless bureaucrats,” Paul said in the video.

“We can simply say no, not again,” he added about the potential of pandemic-era lockdowns returning.

Paul has specifically targeted health officials such as White House medical adviser Dr. Anthony Fauci in the past for their changing positions on masks and support of lockdowns and vaccine mandates – he’s even called on the Department of Justice to investigate Fauci over whether he lied to Congress about funding gain-of-function research. In his video, Paul set his sights on Rep. Nancy Pelosi (D-California) and the potential that the House Speaker could mandate vaccines for the Capitol, something multiple Democrat lawmakers have been pushing for.

“Nancy Pelosi – you will not arrest or stop me or anyone on my staff from doing our jobs,” the Republican senator said. “We have all either had Covid, had the vaccine, or been offered the vaccine. We will make our own health choices. We will not show you a passport, we will not wear a mask, we will not be forced into random screening and testing so you can continue your drunk-with-power reign over the Capitol.”

Paul, a medical doctor who was the first senator to be diagnosed with Covid-19, has caused outrage among his liberal critics with his latest defiant video, with some taking his words as “dangerous” anti-vaxx rhetoric.

Some dismissed Paul’s “freedom” rant simply for the fact that the libertarian-leaning Republican was supportive of former President Donald Trump in the past – including anti-Trump Republican Joe Walsh, who briefly flirted with the idea of running against Trump in the 2020 presidential election.

Paul may not be a favorite among liberal pundits and activists, but he has received praise from conservatives for multiple high-profile verbal duels with Fauci and for his consistent resistance to government mandates in response to Covid-19. Paul claims Americans have been thanking him for taking stands on the coronavirus publicly.