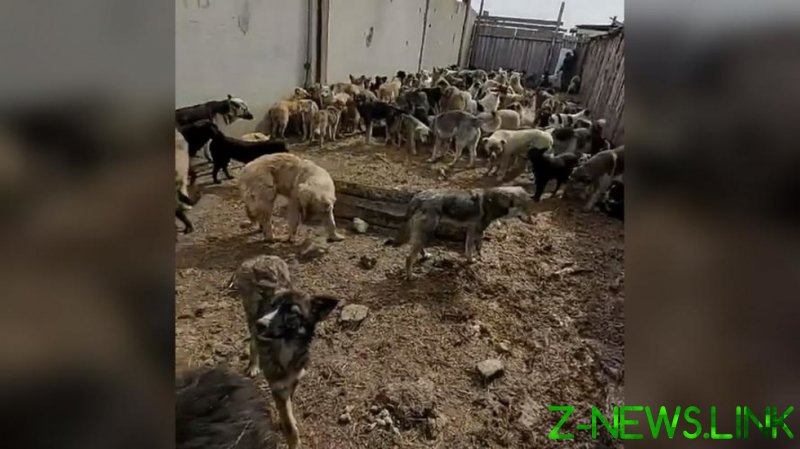 Chita is located in Russia’s Far East, around 5000km east of Moscow. The kennel, located in a prison, is tended to by five inmates, and it is forbidden to bring a camera into the facility. However, local animal rights activists managed to take a video of the disgusting conditions, with the dogs all squeezed into a small area.

“Dogs gave birth in front of us, and others immediately jumped up, and they ate the puppies,” said Irina Morozova, administrator of the animal aid group Vernost.

“I realized that I had to prove somehow that dogs were dying there,” she explained, noting that she carefully snuck her phone into the prison.

According to Natalya Arsalanova, another activist, the shelter has around 200 dogs living in cramped conditions, meaning the animals end up attacking each other.

“We can only guess how many die there. It’s just a concentration camp,” she said.

Speaking to TV channel 360, Arsalanova also claimed that dogs have been seen eating their fellow canines’ corpses due to a lack of food and water.

Built in 2016, the kennel houses strays, supposedly giving the homeless animals a place to live and be looked after. Earlier this year, the facility gained a significant amount of public funding, when it was granted 29 million rubles ($375,000) for catching, transportation and housing.

Following the latest revelations, the local prosecutor’s office has started an investigation. Officials will examine the kennel conditions, as well as the animals’ nutrition and treatment.

Starting this year, the kennel in Chita began working with ‘Five Stars,’ a controversial company from Siberia. In November 2020, Russian animal protection organization Vita alleged that Five Stars has killed more than 50,000 dogs and cats since 2008, at a shelter in the village of Karluk, near Irkutsk. The activists claimed that they found animal corpses with traces of violent death. The company’s owner, Alexander Soldatov, has denied the allegations.