These pictures were banned in Soviet times. Photo 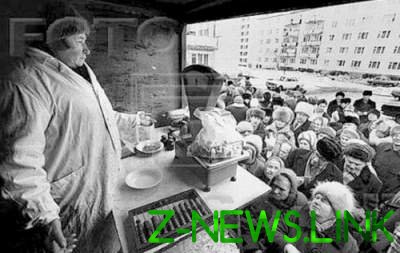 Similar paintings in photography was not welcomed.

It’s amazing, but many fans of the Soviet Union, talking about how it was great in those years, show imaginary pictures from the newspaper “Pravda” and retouched images from “Books about tasty and healthy food” — say, that’s exactly the way it was. It somehow reminds the situation with the film “Kuban Cossacks” — after his show, many rushed to the Kuban, expecting to see there eared fields and full barns, and he saw hunger and poverty. And all because of the need to distinguish between reality and propaganda.

In today’s post I have collected some interesting pictures of real life in the USSR. These photos are not published in the editorials of the “Truth”, most of these photos were taken on home cameras by the Soviet citizens. For most of these photographs of the photographers could be the problem — the Soviet government during the years of its existence was very afraid of the truth, calling such shots “it’s we have temporary difficulties” or “this is a special staging denigration of the socialist way of life”.

So in today’s post — selection is banned in the Soviet Union pictures of real Soviet life.

Often fans of the USSR people write what they say “your photo 1985-1990 years, this is no longer the Soviet Union!”. Such talk as “the Great and Wonderful state” existed in a narrow time corridor from 1950 to 1965. Well, I think to argue here is useless, better look at the photo. So that was the grocery Department in a small shop in 1959. Personally, I have nothing else but misery and poverty, to name it may not. 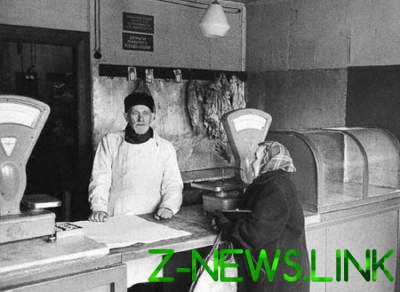 And this is the place for apples in 1965. This is a very good indicator of life in the Soviet Union and “commodity security of citizens” — for some lousy apples on the street in winter the queue. 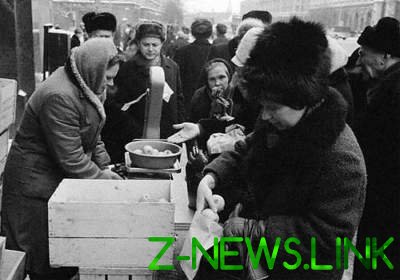 Moving on, in 1972 before “bloody perestroika, when Gorbachev cursed for the sake of those damned capitalists destroyed prokatyvalis country” (). In the photo — grocery Department grocery store. Please note how a simple reception was achieved the feeling of “plenty of goods” shelf seems to be full, but if you look closely — there are only 2-3 kinds of canned food and bottles of 0.7 with some dark fluid, or smelly, unrefined oil, or with some (also smelly, but in a different way) alcohol. 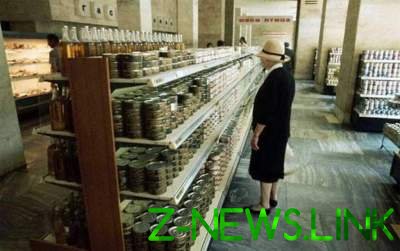 OK, enough about the city, maybe in the villages people lived better? Let’s see, what were the shops in the countryside. In the photos below, the so — called “General store” — this abbreviation called shops rural consumer society. “We need to organize Soviet trade without capitalists, big or small, is trade without speculators, big or small,” wrote in one of his works of comrade Stalin.

Trade eventually organized “without capitalists,” but without meat, fish, sweets, vegetables, fruits, dairy products and everything that should be normal daily diet of a person. Often the General store was only sour bread “brick”, salt, matches, candles, dog “commercial” soap, cigarettes, Pamir and galvanized buckets, there was nothing else. 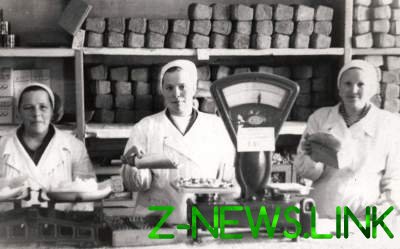 Photograph, 1980, is also to “cursed restructuring”, those blessed Brezhnev era, which are so loved by fans of the Soviet Union — because then, as you know, everyone was handing out free desjatiletie apartment, fed the world’s best products for free and gave me 10 cars per family.

In the photo — all in the sausage Department. Buyers (mostly elderly women beaten down by life type) lined up 1-2 varieties of sausage. Please note, how is the trade — buyers do not see the item up close, the saleswoman there is something she cuts off and puts on the scale — “go ahead, and that this will not happen!” 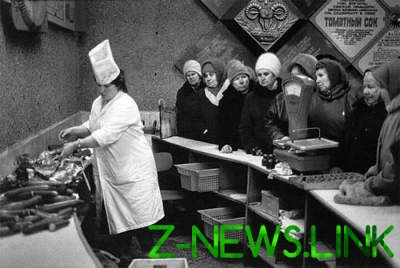 This is also a very good picture that definitely wouldn’t publish in any “Truth” until 1991, it shows the essence of Soviet trade. It’s hard to say what product you’re selling in this photo, but it does not matter, it is more important to pay attention to how it happens. Product release through a small window, behind which crowded the place, in which case the window can be quickly cover. This creates the feeling of “gracious tolerance the most valuable resource” that the very posebe very well shows the attitude of the people in the Soviet Union.

Guy-buyer makes the saleswoman something very similar to working in the gaps — and presents two of them (probably for myself and for wife). The product (whatever it is) is likely available only to employees of a particular enterprise, and not more than a certain number of “in one hand”, otherwise there would be no need to take a second pass. 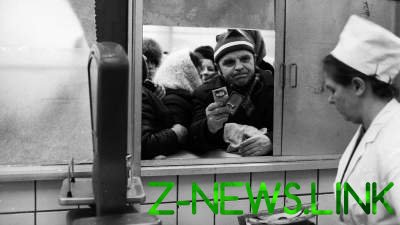 Or, also very good picture. If this store were ordered to remove fotokor “Truth” — then he probably would have captured a smiling saleswoman against the background of the product, but the real truth becomes visible only if you step back a bit: 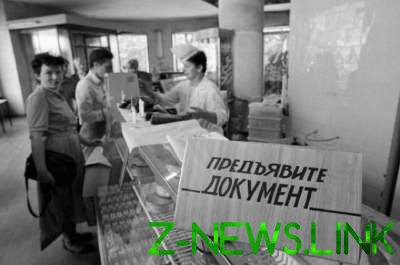 You can ask why in queues grocery departments some notable women than did men? The men had their queues, like the queue for alcohol, photograph the first half of the eighties: 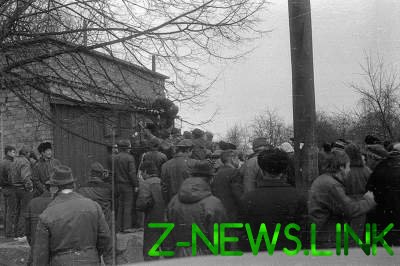 Even men could often see in the queues in points of reception of empties: 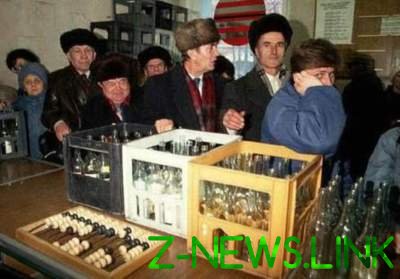 Here, too, a very revealing frame: 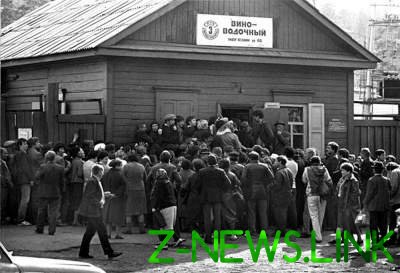 Or here. It took an ordinary Amateur photographer on some domestic “Vilia-auto”. Do you think published would not have this picture in every Soviet newspaper? 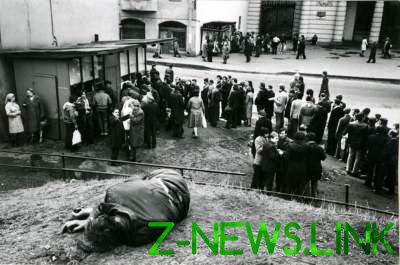 However, women in the “alcohol” queues can also be found. Yes, it the native of Soviet Union since the “the fifth anti-alcohol campaign,” and not of “dashing nineties”. In the photo — the Soviet people that were born, raised and educated “in the blessed the Soviet times”. 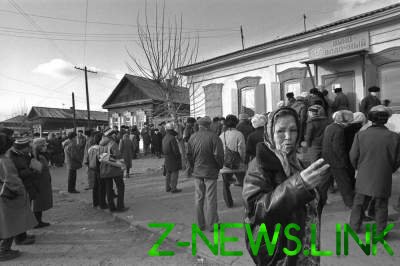 Regulars Soviet pubs. As you can see, often they were quite similar to the image of the “Soviet man” promoted in periodicals of those years. 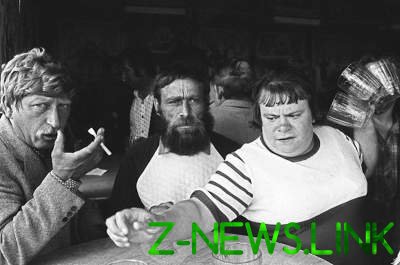 The labor of Soviet women who received “equality”. “In the capitalist countries the woman is just an object of capitalist exploitation of Western imperialism, and only in our great socialist state women were given the right of choice.” Choose, in short — can dig with a shovel, and can sufla. 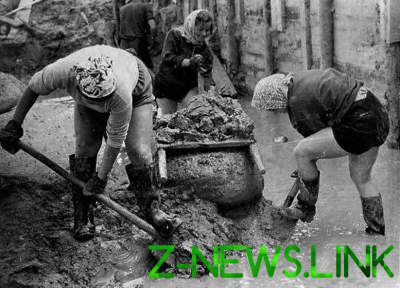 Soviet fast food. Harmful capitalist McDonald’s, which uses natural meat mercilessly exploited by the capitalists chickens in the Soviet Union of course was not, and therefore, workers were forced to eat milk and bread, sitting at the bus stop and the Mat on his knees in a newspaper. 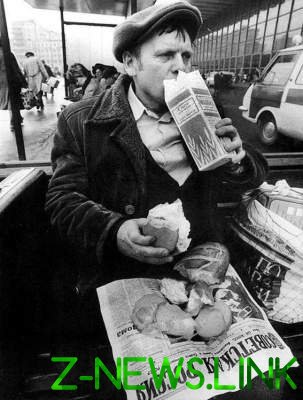 Now back in the shops. In the eighties the situation with goods felt worse and worse, and the sellers were forced to go to all sorts of tricks, here’s an example of merchandising in the Soviet, or “how to upload two kinds of preserves, so that there is a sense of abundance”. 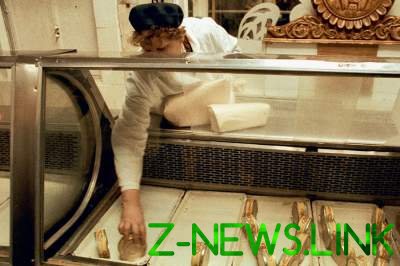 And now completely empty shelves. These photos were published in the press only after 1987, when the whole country was horrified by what is actually happening in the field of Soviet trade (and in other areas of life too). However, almost everything about it and so knew just didn’t speak about it aloud. 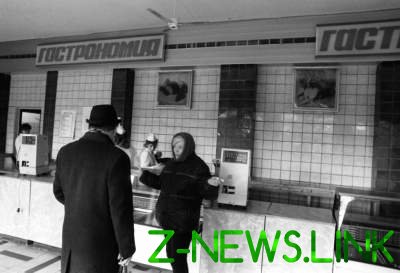 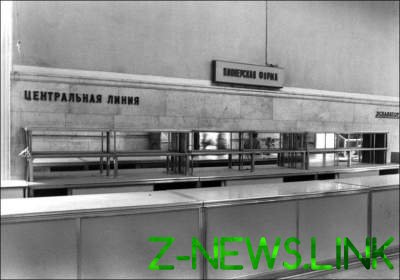 The end of the eighties, street trade: 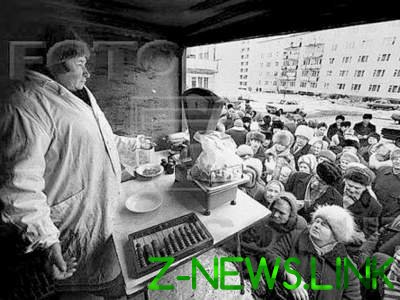 In 1990, the last months of the Soviet Union and a natural result of “planned economy Soviet-style” empty shelves and new taxes. As you see — real life in the USSR was absolutely not what it showed in the periodicals of those years, and only on camera Amateur photographers could see how all was actually.