Home / WORLD / There’s more than just Trump’s wall between the US and Mexico, & the deeper problems won’t go away with Biden

There’s more than just Trump’s wall between the US and Mexico, & the deeper problems won’t go away with Biden 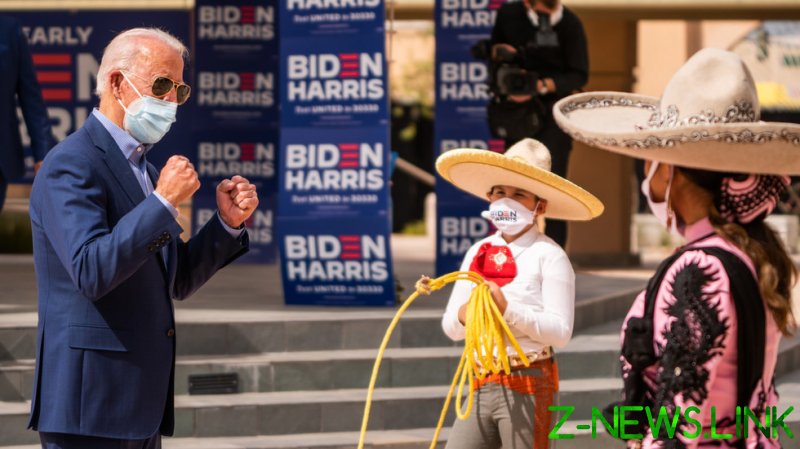 You don’t hear a lot about it these days, but one should never forget that the Trump administration built its support around antagonism towards Mexico. His slogan: ‘Build a wall’ would ultimately define his presidency, not so much in terms of substance, but in terms of its nationalist appeal and message to insecure identities in the United States. The president pledged to crack down harshly on illegal immigration across the southern border, vilifying and stereotyping Mexicans as “drug dealers, criminals and rapists.”

It is therefore the logical assumption that with Trump heading for the exit, that under Joe Biden Washington’s relations with Mexico will improve, right? Quite obviously, the racist scapegoating, draconian migration measures and talk of walls will come to an end. Think again. Trump has been a big problem in US-Mexico ties undoubtedly, but he is not ‘the problem’ which lies at the center. On Tuesday, lawmakers in Mexico City passed a new bill which now prohibits “US agents” from working in the country against drug cartels without cooperation with the country’s authorities, forcing them to share information and ending their diplomatic immunity.

Mexican President Andrés Manuel López Obrador, who is backing the law, stated: “In other countries, in the United States, there are rules, there are norms.” It is speculated to be a response to a high ranking Mexican general having been arrested for alleged collaboration with cartels, although the US Justice Department later dropped the charges.

This isn’t a Trump-specific problem, it’s a problem of the fundamental inequality manifested within the entire US-Mexico relationship and the perceived infringement of its national sovereignty in the pursuit of the ‘war on drugs’ – an issue which in turn is a product of the unequal relations. The new bill is designed to force a degree of reciprocity in the relationship, and these fundamental problems will certainly remain under Biden.

The US-Mexico relationship must be understood through the prism of historically imposed vast inequality. This is the only way the drug cartel problem can be contextually understood. Mexico, once the largest country in the Americas, was forcefully cut down to size and weakened by an expansionist United States, who annexed its territory and imposed its hegemony over it, sending it into a global South country which the US could readily exploit. The subsequent arrangement of a wealthy and massive capitalist superpower on its border serves to hobble Mexico’s development by creating a ‘vacuum effect’ – sucking away its educated talent, its labor force, limiting its companies from growing and, of course, giving incentives to criminal enterprises and corruption.

The drug cartels exist because the US is a wealthy consumer nation surrounded to the South by a series of nations who are poor and, owing to economic arrangements placed on them by Washington, remain impoverished, creating a one-way incentive which lures in many who have little prospect in life.

Washington, of course, is unapologetic about this, and despite the gaping structural inequalities and problems which create this trade, subsequently demands that its neighbors police this, while allowing US agents free rein. The US takes as many liberties as it wants in combating the drug trade, even if its actions violate or disregard the national sovereignty of these countries. Mexico is treated as a subordinate, with the country bearing the full brunt of pandering to America’s demands in bloody conflicts against the cartels.

The US does not appear to trust Mexican authorities in battling the cartels, which is why many have described the new bill as a death knell to cooperation. They argue that rampant corruption in Mexico means local politicians and law enforcement cannot be engaged with, therefore America should have the right to investigate on its own, unimpeded. No more, Mexico says: US agents no longer have immunity to run rampant in their country without consequences. Why? This is, if anything, a strong bargaining chip by Mexican authorities in its future negotiations with the US. Cooperation is a privilege, not a right, and politicians in the country are seemingly happy to use the cartels as bilateral leverage against Washington.

Given this, the demise of Trump does not end the problems in the US-Mexico relationship, not one bit. One should not assume that things between Washington and Mexico City were all rosy until Trump came along and waged his campaign of racism, and that Biden, as someone seemingly more dignified, can whisk that away.

That downplays the reality of the situation. The racism of the White House towards its southern border is long-standing and not partisan. It’s not so much about vulgar rhetoric as it is about huge structural inequalities between the two countries, and the fact that the ‘war on drugs’ has been a longstanding and tedious one. One which has been exclusively in Washington’s interest to pursue, to Mexico’s huge detriment.

That Mexico’s lawmakers are finally laying down the gauntlet, stating that their country is not a playground or a ‘backyard’ for its rich neighbor, is long overdue. Will America, the long-standing bully in this relationship, learn to negotiate and to respect Mexico’s national sovereignty? Or will it just carry on as usual?