‘There was blood everywhere’: Brave teenage jiu-jitsu champion downs street thug who bit his ear in attack in England (VIDEO) 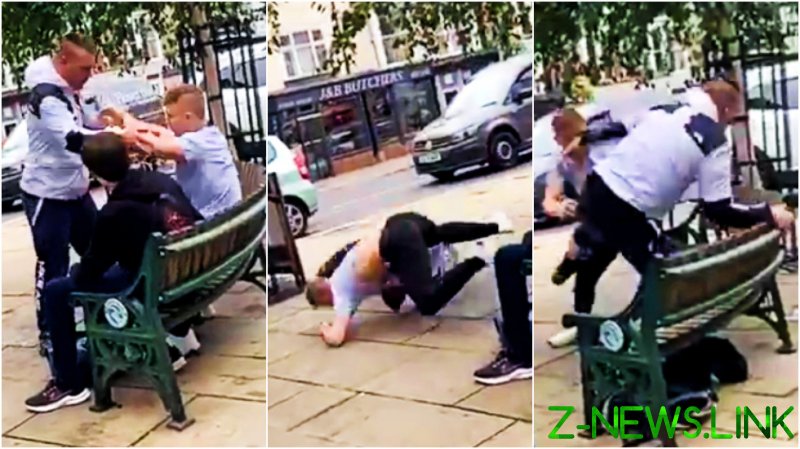 The clip has been viewed almost 800,000 times on Twitter since it was shared by British youngster Alex Williams’s proud coach, former MMA fighter Alex Enlund, earlier this week.

In the shaky footage, an unknown man is seen approaching a figure as he sits on a bench. After he appears to lean in, his target then hurls him acrobatically to the pavement and pins him down, allowing him up and then swiftly grounding him again when he launches another attack.

Four-time Brazilian jiu-jitsu champion and MMA hopeful Williams claimed he had been forced to head to hospital after noticing blood dripping down his neck from an alleged bite by the man, adding that he received six stitches for the injury from the incident which is said to have taken place in North Yorkshire.

“There was blood everywhere and I realised he had bitten a chunk out of my ear,” Williams told Teeside Live, explaining that he hoped the “scuffle” would inspire more young people to defend themselves effectively.

“I thought after I had taken him down the first time that he would have walked away but he came back for more so I just continued to try to restrain him without hitting him.

“I was in a seated position and the move just came to me naturally because I’ve drilled it a thousand times in training. My main aim was to de-escalate the situation safely.”

“Alex shows composure, restraint and courage to handle this situation. Get your kid into martial arts and combat sports – it’s unlikely they will become the bully due to the humility learned on mats.”

The prodigy was predominantly applauded by the unexpectedly huge audience that saw the struggle, although he inevitably fell foul of critics of his approach.

“Looking to use BJJ in a street fight is asinine and should only be done as a last resort,” warned one.

“It’s not smart to grapple with some random aggressive stranger when you’re putting yourself into a position to get stabbed or shot.”

An admirer replied: “When he took him down the first time he could have easily punched him while he had his back but didn’t – he just dodged a wild swing just after. Quality from the young lad.”