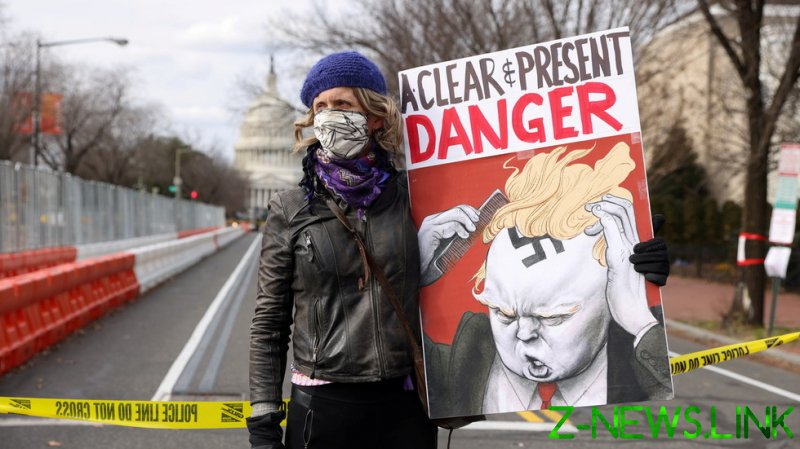 “There was a conspiracy unfolding behind the scenes,” writes Molly Ball – a biographer of House Speaker Nancy Pelosi, by the way – in TIME magazine this week, describing it as a “vast, cross-partisan campaign to protect the election – an extraordinary shadow effort.”

Ball’s article reveals a lot, from why there were no street riots by Democrats either on November 4 or on January 6 – the organizers of this “conspiracy” stopped them – to who was behind the push to alter election rules in key states and set up mail-in voting, who organized “information” campaigns about the results of the election, and who even threatened election officials into making the “right” decision to certify the vote.

While everyone – myself included – was focused on the summer riots as a possible “color revolution,” they turned out to be misdirection. According to TIME, the real action was taking place behind the scenes, as Democrat activists and unions joined forces with NeverTrump Republicans, Chamber of Commerce, corporations, and Big Tech to make sure the 2020 election turns out the way they wanted. They call this a victory of democracy and the will of the people, of course, for no one is ever a villain in their own story.

“Their work touched every aspect of the election,” Ball writes, from getting states to “change voting system laws” and fending off “voter-suppression lawsuits,” to recruiting “armies” of poll workers and pressuring social media companies to “take a harder line against disinformation.”

Then, after Election Day, “they monitored every pressure point to ensure that Trump could not overturn the result.” Alarmed yet? Maybe you should be.

So who are these shadowy saviors of Our Democracy? One of them is union organizer Mike Podhorzer of AFL-CIO, a traditional Democrat powerhouse. Another is Ian Bassin, associate White House counsel in Barack Obama’s first administration. The roster of his “nonpartisan, rule-of-law” outfit called Protect Democracy includes a lot of Obama lawyers, a John McCain campaign aide, an editor from the defunct neocon Weekly Standard, and someone from SPLC, while among their advisers is the NeverTrump failed presidential candidate and ex-CIA spy Evan McMullin.

Bear that in mind when you read Bassin’s quote that “Every attempt to interfere with the proper outcome of the election was defeated,” (emphasis added) but “it’s massively important for the country to understand that it didn’t happen accidentally. The system didn’t work magically. Democracy is not self-executing.” Chilling words.

A leading member of this effort is Norm Eisen, another White House counsel under Obama. The pro-Trump Revolver News even raised the alarm about Eisen plotting a “color revolution” in September – but by then it was too late, even if anyone had been paying attention.

By then, the National Vote at Home Institute – an organization barely two years old, and part of the effort – had already instructed secretaries of state across the US with “technical advice on everything from which vendors to use to how to locate drop boxes,” and even provided them “communications tool kits,” i.e. talking points.

In November 2019 – a full year before the election! – Facebook’s Mark Zuckerberg hosted “nine civil rights leaders” for dinner, one of whom was Vanita Gupta, Obama’s assistant Attorney General for Civil Rights. It was part of this shadowy coalition’s campaign for “more rigorous rules and enforcement” on social media platforms – just in case you were wondering how Trump ended up deplatformed, or the New York Post’s story about Hunter Biden’s laptop got suppressed before the election.

Ironically, as part of their pressure on Big Tech Democrats had whipped up a moral panic about super-targeted “Russian” internet memes that somehow “influenced” the 2016 election – yet Ball’s article says that two groups involved with the conspiracy “created state-specific memes and graphics, spread by email, text, Twitter, Facebook, Instagram and TikTok, urging that every vote be counted.”

Podhorzer’s messaging efforts were informed by Anat Shenker-Osorio, who “applies tools from cognitive science and linguistics in her work with progressive organizations globally,” according to her 2018 fellowship bio from George Soros’s Open Society Foundation.

Though Ball doesn’t mention it specifically, those Twitter and Facebook “pre-bunking” labels about safety of mail-in ballots and the winner not being known on Election Day are also the activists’ talking points.

Remember how Republican observers were thrown out of the ballot-counting facility in Detroit? Reports at the time said it was because of overcrowding, but the Time article reveals that a Democrat activist mobilized “dozens of reinforcements” to “provide a counterweight” to them, so eventually “racial-justice activists from Detroit Will Breathe worked alongside suburban women from Fems for Dems and local elected officials.”

It was activists who came up with a strategy of denouncing any challenge to Detroit vote counts as racist, too.

When President Donald Trump asked Michigan’s Republican-majority legislators to challenge the results, Eisen called it “the scariest moment” of the election, and the “democracy defenders” sprung into action.

Eisen’s lawyers dug up dirt on the two lawmakers invited to Washington, activists hounded them at airports, NeverTrump Republicans made calls to party friends, and Bassin’s outfit commissioned an op-ed threatening criminal charges by Michigan’s Democrat AG – whose office then retweeted it. The two were even picketed at the Trump Hotel in DC. The brigading eventually worked, as Michigan Republicans agreed to certify the elections – and other contested states followed.

Perhaps the most intriguing part is buried towards the end. Ball reveals that she got a text from Podhorzer – the AFL-CIO organizer – on the morning of January 6, hours before what the Democrats would describe as “insurrection” by Trump supporters at the US Capitol, saying that the “activist left” was “strenuously discouraging counter activity” in order to “preserve safety and ensure they couldn’t be blamed for any mayhem.”

How did Podhorzer know there would be “mayhem,” hours before the “storming” of the Capitol that Democrats claim Trump “incited” at the rally outside the White House at noon? It’s a mystery.

What’s not a mystery is the result of the “conspiracy” Ball has revealed: a de facto one-party state in which Democrats hold absolute power at every level of government and seek to prosecute dissent and disenfranchise the opposition.

Last month, with no inkling of the behind-the-scenes operation just revealed in Time, I wrote of a non-kinetic “fifth-generation” civil war that had unfolded as “a battle for hearts and minds, a series of psychological operations that played out on the media, political and economic fronts.” I argued it had successfully swapped the American Republic for something called “Our Democracy,” which maintains the form but has a radically different content.

One of the “heroes” of Ball’s piece, NeverTrump Republican Jeff Timmer, has a quote in the article about how “Our democracy only survives if we all believe and don’t look down,” referring to the cartoon character Wile E. Coyote.

It’s an interesting admission, as the coyote is the villain of those cartoons – and the one actually immune to the effects of gravity is the roadrunner bird. But you’re not supposed to notice this – and besides, noticing will soon be a crime in Our Democracy.