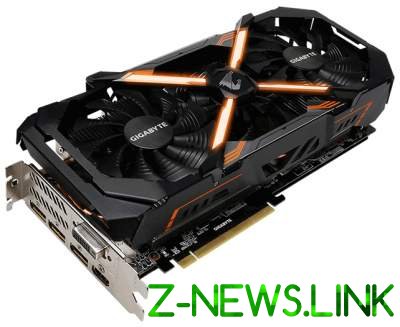 In the absence of the need urgently to bring to market graphics card for gaming new generation (Volta) NVIDIA continues to squeeze the life out of Pascal. The next goal of the company from Santa Clara is the juxtaposition monitored by PWM version of the accelerator Radeon RX Vega 56 new models of GeForce GTX 1070 Ti on the chip GP104. The latter has already been confirmed by the developer of the overclocking utility MSI Afterburner. Besides, earlier it was announced its key characteristics and declassified the date of announcement of 26 October.

Resource Tech ARP has found out more details about the GeForce GTX 1070 Ti. In particular, the us site reported that on 26 October is expected to be only a formal announcement of the GTX 1070 Ti, and sales of its various versions will start a week later — November 2. The source also said the recommended price of new items, which will be $429, not $ 450-460, as we expected. Accordingly, under the current pricing on the reference card Radeon RX Vega 56 in the region of $500 (the recommended price — $399) NVIDIA might be more efficient and cheaper competitor. However, AMD still have a few weeks to affect AIB partners and distributors. Now due to cryptocurrency miners wanting to buy Radeon chips, Vega and Polaris 10 10 enough, but relying only on them would be from Sunnyvale too rash.

Given our earlier preliminary specifications GeForce GTX Ti 1070 remain in effect. The new modifications to the core Pascal GP104 will include 2432 stream processors, texture units 152, 64 block rendering and 256-bit memory bus. The size and frequency of buffer memory GDDR5 will be the same as the GeForce GTX 1070 — 8 GB and 2000 (8000) MHz, respectively. GPU frequency is expected to range 1607-1683 MHz and a maximum power consumption of the accelerator under load — 180 watts. Through overclocking future owners of GTX 1070 Ti can advance the performance of their cards to the GeForce GTX 1080. Note that the limitation of memory bandwidth to 256 GB/s will not give the new “Titanium” to surpass the level of the senior model.

Output 1070 Ti GeForce GTX is almost Halloween (October 31) confirms the promises to get the Gigabyte with Aorus Ti GTX 1070 to the wallets of gamers.