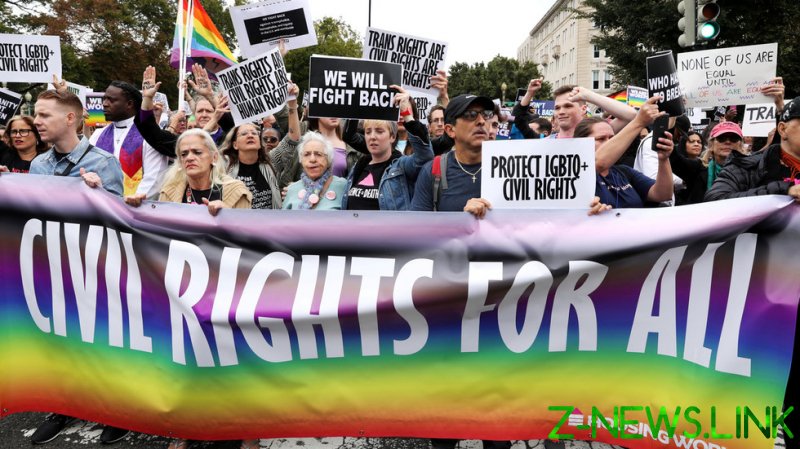 If in doubt, just slap another letter on the end. What started out as a movement to protect the rights of gays and lesbians has morphed into an unwieldy, wobbling alphabet soup of a concoction.

It’s an acronym with every shade under the sun now, it seems. But there are deep cracks appearing between two colours of that rainbow.

But, for sure, the number of women who were actually born with a penis is way bigger and way louder.

Let’s just sort out the terminology first – as it can get very complicated. A transwoman was born with a penis and a transman was born with a vagina and they may, or may not, have had surgery and hormone treatment to change what nature gave them at birth.

Many transgender lobbyists insist that a transgender woman is a woman. End of discussion. But, as discussed earlier on RT.com this can cause real problems in prisons and sports teams. And Spanish feminist leader Lidia Falcon O’Neill told RT.com on Monday how she had faced down the Franco-era fascists of the 1970s only to face a similar kind of fascism from the transgender mob today.

It’s becoming a hot potato in the US too, with new President Joe Biden committed to turning the stalled Equality Act into law. The law would amend the Civil Rights Act to prohibit discrimination on the basis of sexual orientation or gender identity.

Here, RT.com talks with Sam Esther, an activist in the US with the campaign group Feminists In Struggle (FIST) about concerns for the future particularly with regard to the L members in that lengthy initialism.

Anyone speaking out with an opinion that differs from that of the trans mob, these days can find themselves at the centre of a witch hunt: Sam Esther is a pen name.

SE:“In the US it was lesbian and gay liberation or lesbian and gay rights for decades. It wasn’t about identities but about the freedom to love people of the same sex. The B was added in the early 90’s, and the T even later.  Now I understand it is LGBTQIA + – “queer“ which can now include straight people into kink, questioning, intersex, asexual etc. “A” can also mean allies.

“Might as well call it everybody. Most of the resources goes to the T. L is on the bottom of the pyramid.

“I’m a lesbian and I feel alienated from what is supposed to be my own community. There’s no room for women with my lesbian feminist politics. What I feel is the loss of the strong movement and community we had in the 70s and 80s and into the 90s. (I go way back.)

“The LGBTQIA+ movement is actually in the process of splitting. There are now LGB Alliances In the UK, Ireland and the US (that I know of.)”

RT: “Aren’t all those disparate people, those different issues and voices, just lost and drowned out in that alphabet soup?”

SE:“Yes, the rights of gays and lesbians in particular as homosexuals are lost, also because the gender identity ideology being promoted through the T eliminates or overrides sex which erases not just females but homosexuals as well.

“No sex, no sexual orientation.”

RT: “What has the transgender lobby done for feminism in the US, and globally?”

SE:“It has weakened our ability to name ourselves, to talk about our bodies and reproductive capacities and our lives and to organize as females for our liberation as a sex.

“It has contributed to the destruction of lesbian feminist culture and communities.

“It has led to attacks on female only programs that we need due to sex-based oppression and discrimination, to allow us to advance in society. Those include battered women’s shelters, rape crisis centers, sports programs, affirmative action programs for females in employment, education and politics, such as special scholarships or training programs including for women studying STEM (science, technology, engineering and maths) programs or entering the trades.

“And female only facilities/spaces where we are in various states of undress or physically vulnerable are being eliminated despite the persistence of male violence against women and girls that is still pervasive.”

RT: “The transgender lobby, pretty much, say a transgender woman (though born male) is a woman and… end of discussion. What is your personal opinion on this – very, very specific – gender issue?”

SE: “Males who identify as transgender or who are referred to as “trans women” are not any kind of woman because “women” are adult human females – a sex, rather than a gender role or set of “feminine” stereotypes that anyone can embrace.”

RT: “Are transgender men’s (that’s men who were born as female) voices quite as vociferous and often unyielding?”

SE:“Of course not. They are female.”

RT: “I read that the Christian Right in the US are using the whole trans debate for their own ends?”

SE:“The majority of the Christian Right are actually not supporting the trans lobby at this time though this could change in a heartbeat.

“Right now they are using the excesses of trans activism as a wedge against gay and lesbian rights and posing as ‘allies’ to feminists. Of course, they are nothing of the kind.

“We don’t believe anyone is born in the ‘wrong’ body. We are especially concerned about the ‘transitioning’ of minors who are not mature enough to make these decisions that would turn them into lifelong medical patients and sterilize them. And we oppose the erasure of females and the denial of our sex-based rights.

“However, we believe that everyone should be free to dress and express themselves as they like, and love who they love – the opposite of the Christian Right’s position.”

RT: “Surely a genetic male could perceivably have a physical advantage when it comes to sports? That’s not someone being nasty or trying to oppress anyone, it just seems common sense. It’s sport, a game.”

SE:“That misses the main point. Women and girls have a right to female only programs across the board in order to give us opportunity where historically it has been denied. Not just sports though, women’s sports are important.“

RT: “Is it, really, enough to just ‘feel’ like a woman (therefore I AM a woman, no arguments and no discussions)?”

SE:“I have no idea what being a woman ‘feels’ like outside of particular female bodily experiences (period cramps, pregnancy, giving birth, menopause).

What males who identify as women are ‘feeling’ is they are identifying with sex stereotypes about how women are supposed to dress and behave in the world. Feminists reject these stereotypes.

“They have nothing to do with who women really are but are imposed on us by patriarchal society.”

RT: “Aren’t those the classic tactics of the school bully?”

SE: “Yes, unfortunately there have been lots of bullying by supporters of transgender ideology against feminists and our male allies.”

RT: “There have been several cases in the UK where a transgender woman has sexually assaulted women in female prisons (and some have even used the whole thing as a ruse to gain access to vulnerable women in the first place). Some transgender campaigners in the UK don’t want separate transgender wings in prisons, they want women to be women. End of discussion. Should transgender women be in women only prisons?”

SE:“No – they are not women because women are a sex, not a role. Because male violence is so pervasive, women have a right to be in spaces with no privacy such as prisons apart from males.

“Persons born and socialized male who identify as transgender can be both victims and perpetrators of male violence. Their safety and comfort should not be at the expense of women’s safety, comfort and dignity. Third spaces make sense. Of course, all prisoners should be treated in a humane manner with opportunity for fresh air, exercise, education etc.”

RT: “What is your view on the Equality Act?”

SE:“We think it should be amended to preserve sex based rights to female only sports and programs while protecting gays, lesbians and bisexuals and transgender individuals and all gender non-conforming people from discrimination in employment, housing etc. Aimee Stephens (a funeral director fired for being transgender) in the Bostock case should not have been fired.”

RT: “What is your opinion on what Biden has done so far with regard to these issues?”

SE:“We support his actions expanding abortion rights. We want him to take action to register the Equal Rights Amendment into the US constitution (already ratified by 38 states).”

RT: “Is this just such a politically hot potato right now, it’s almost just too hot to touch? How did we get to this point?”

SE:“I wish I knew. The silencing of dissident opinion is frightening, a modern day witch-hunt. A clash of rights has emerged which can only be resolved by free respectful discussion and debate.”