‘There has just been non-stop idiocracy happening. We’re living in a comedy goldmine right now’ – YouTube comic Joey B Toonz 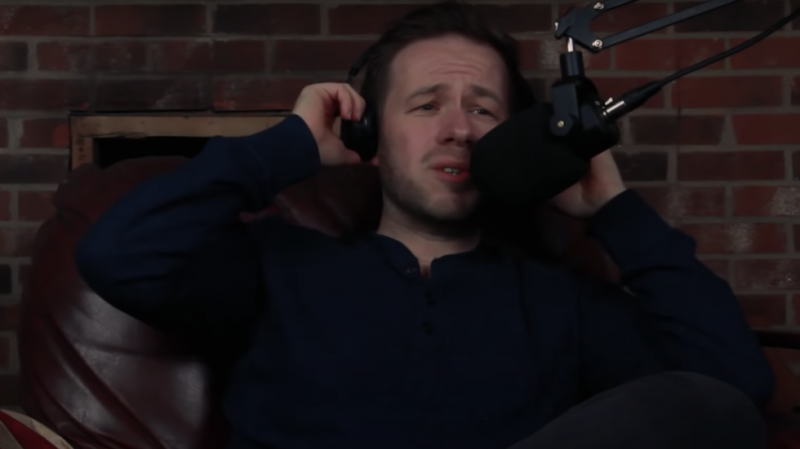 Recently I had a rude awakening to something that was inexplicably trending worldwide. Seeing the tweet of a comedian and social commentator I follow, I learned of the bizarre ‘milk crate challenge’.  While many people around are struggling to get by, or are under lockdown, a surprisingly significant number of people were filming themselves trying to walk over a pyramid of milk crates.

Being generally oblivious to such time-wasting and stupendously idiotic fads, I decided to speak with the guy whose tweet brought it to my attention.

Joey Borelli, or as he is known on social media, Joey B Toonz, is an American comedian, illustrator, animator. Before starting his social commentary, he worked in the film industry, and toured film festivals with his comedy-based animated shorts.

In recent years, he started doing scathing critiques of some of the most bizarre and narcissistic trends and people on social media.

I came across him sometime last year, stumbling upon his hilarious videos highlighting the narcissism so prevalent on social media platforms nowadays, a series titled ‘Narcissists and social media’.

During our conversation, he explained his drive to do social commentary.

“There has just been non-stop idiocracy happening. We’re living in a comedy goldmine right now. I’m basically trying to highlight the idiocracy of what is going on in the world right now, saying some of the stuff that we accept as normal is the problem.”

I, myself, am not on TikTok, so have remained blissfully unaware of the insanity that reigns there. But Joey B is acutely aware.

“I discovered TikTok two years ago. I said to myself, what the hell is this?” he said, noting not only the narcissism prevalent on the platform, but also the general lack of talent or creativity of some extremely popular “influencers.”

“These kids are twirling their arms around, but anybody could do this. It’s not like these people are salsa dancing or doing some kind of complex ballet routine. And they’re getting sponsors and they’ve got millions of followers. Meanwhile, there’s a guy painting like Leonardo da Vinci and he’s got 300 followers.”

For his video on the milk crate challenge, YouTube gave Joey B a strike, preventing him from uploading content for one week and warning him that his video violated YouTube’s harmful and dangerous policy. But, as he pointed out, it’s not like his was the only video out there.

“If you go on YouTube now and search ‘milk crate challenge’ there’s, I dunno, maybe seven million of those videos on 10 million channels. It’s on the Tonight Show channel, it’s on the Today Show channel, it’s on all the top YouTubers’ channels. But when I talk about it, all of a sudden, it’s ‘harmful and dangerous’ content. The only difference is, I’m making fun of it and I’m showing society how stupid and dangerous it is.”

According to Joey, this isn’t the first time his content has been censored by the tech giants while other examples of the same subject matter abound on the platform.

“Any time any of my content gets removed, I always find that same content on multiple channels, major channels, whether news organizations or  just big YouTube channels. The only difference between my videos and their videos is my commentary. So apparently they don’t like what I’m saying.”

But others do like what Joey is saying, myself included.

“The number one comment I get from people is: I can’t believe you’re out there! You’re saying everything that’s on my mind, all the things I can’t say. People really are censored,” he told me.

Most of us have taken a selfie. Some do so more than others. Some, obsessively so. This is a point Joey highlighted.

“If you went back to 1982, and you had a family member with a polaroid camera attached to her face, and she’s taking pictures of herself, there’s photos flying all over the floor, you’d call the doctor. You’d have a family meeting: ‘We don’t know what’s happening to Suzy!’”

When one puts it like that, the obsessive selfies do seem borderline crazy. Joey added: “What if you worked at a one hour photo place in the ‘90s and you got a roll of film in, and you’re in the darkroom and you’re developing the film and you see it’s all some person’s face making duck lips. You would think this was sent over by a psychiatric ward for review or something.”

But now, as he noted, it’s entirely common, found on the mobiles of millions of people.

“Photos of themselves in the mirror with the toilet behind. It’s disgusting. And nobody says anything about it. Then me, I’m the guy that’s shouting in the sky about it and I get banned for it. I’m the problem, somehow.”

We discussed the unquestioning obedience of many people these days, and the, in my opinion, nonsensical ‘health’ measures they obey.

I brought up one of his videos, in which he noted the hypocrisy of people like the mayor of Los Angeles who ordered water and electricity to be shut off for those who have “unpermitted large gatherings,” but then went on to participate in a massive Black Lives Matter protest, unmasked and surrounded by people.

Similarly, late last year, California Governor Gavin Newsom dined indoors (with lobbyists for the California Medical Association, much less) at a high-end restaurant after having advised the public to limit gatherings.

“I think a lot of these politicians see us in the way we see them: we don’t respect them, and they don’t respect us. So, they look down at us, and I think they look at us as incompetent and incapable.”

One of the illogical ‘health measures’ inflicted on many over the past year and a half is having to wear a mask to enter a restaurant, but then not while seated. Joey unleashed on that, too.

“So basically, I can spit all over the table, and then the waitress can come and grab the plate with her bare hands, with all the germs all over it, and then bring it past all the people that they say you’re supposed to protect as you walk in with the mask, spreading it all over and then give it to the people in the kitchen, spreading it there.

How does that make any sense?  What is this blind faith in the government or authority to tell us how to manage our health? And why would you just submit to that, when you know it doesn’t make sense?  The brainwashing is really real.”

Another video of his highlights just that point: a man standing on steps and holding a lint roller has people unquestioningly holding their arms out to be rubbed with the lint roller before entering the building.

“All it takes is you standing in a place and mimicking how a business would operate. And they go: ‘okay, must be a security guy. Okay, I guess I just trust whatever he does.’ That’s what’s going on in those people’s minds, they’re not questioning anything. You mean to say that there’s nobody in authority that is taking advantage of those people?”

As he said in one of his narcissists and social media videos, “This is the world we live in now folks: the look at me generation, where everyone finds a way to make everything about themselves and make sure you see it.”

And yet, this sort of behavior is encouraged, while critical thinking is punished.

“For some reason, they don’t want you talking about that. It’s almost as if they rely on that type of content for their platforms. I think they like to keep people dumbed down,” he said.

I would agree. Keep people distracted with the newest crazy trends so they don’t think about bigger issues.