‘There are no words’: Mo Salah produces RIDICULOUS solo goal AGAIN as fans hail Egyptian as best in world 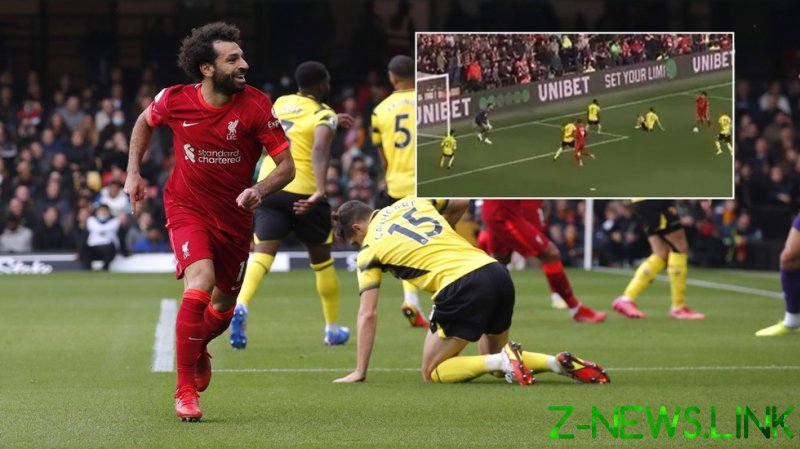 Salah, 29, has hit a rich vein of form which had seem him score nine times in nine games in all competitions for Liverpool leading up to this weekend.

The Egyptian King continued that red-hot run with a sensational solo goal in the 54th minute against Watford at Vicarage Road.

Inside the Watford box, the forward danced around a host of yellow shirts before curling the ball brilliantly into the far corner beyond Ben Foster.

The strike put Jurgen Klopp’s team 4-0 up as they were well on course for a thumping win against Watford, who had new manager Claudio Ranieri in the dugout for the first time.

But the goal wasn’t the first bit of brilliance from Salah on Saturday afternoon.

The Egyptian had helped Liverpool on their way in the ninth minute when he outmuscled Watford’s Danny Rose on the right flank before curling a delightful outside-of-the-boot cross into the box for strike partner Sadio Mane to finish.

The goal meant the Senegalese star joined Salah in the group of players to have hit 100 goals in the Premier League.

Online, fans and pundits were purring at another Salah masterclass – proclaiming him the best in the world at the moment.

“This is different to his 32 goal 2017/18 season. Almost every dangerous LFC attacking move is running through him and his playmaking is matching the world class level of his goalscoring.”

“There are no words, Mo Salah is just incredible,” crowed another fan account.

Salah’s strike was a significant one in personal terms as it moved him level with former Chelsea legend Didier Drogba as the highest-scoring African players ever in the Premier League.

Given his current form, it shouldn’t be long before Salah moves into the outright lead to claim the record as his own.

After the Watford mauling, Liverpool boss Klopp was full of praise for his Egyptian star.

“He is top,” said Klopp.“We all see it at the moment. Who is better than him?

“There is always big discussion about these kinds of things. We do not have to talk about what Ronaldo and Messi did for world football or how long they were dominant, but at the moment it is clear there is nobody better than him.

“His performance was massive today. The pass for the first goal was great and the second goal was special.”

Salah himself was typically modest about his strike, saying: “I don’t know which one was better, this one or the City one.

“I think all the goals were very important. Bobby scored a great hat-trick, Sadio scored a nice goal.

“I’m just trying to give 100% to help the team. I’m feeling confident at the moment, scoring goals and helping the team to get points.

“Hopefully we can win the league and go for the Champions League. It’s important for a club like Liverpool to fight for everything.”

Saturday’s rout for Liverpool was capped by an injury-time goal from Roberto Firmino as the Brazilian bagged a hat-trick alongside goals from Salah and Mane.

The Reds moved top of the Premier League table with their win, two points ahead of Chelsea, who face London rivals Brentford later in the day.

Next up for Liverpool and Salah is a Champions League with Atletico Madrid in Spain, before they play bitter rivals Manchester United at Old Trafford next Sunday.