Home / WORLD / ‘Their lives are in danger’‌: Founder of Afghanistan women’‌s team talks of terror and broken US promises as Taliban seize control

‘Their lives are in danger’‌: Founder of Afghanistan women’‌s team talks of terror and broken US promises as Taliban seize control 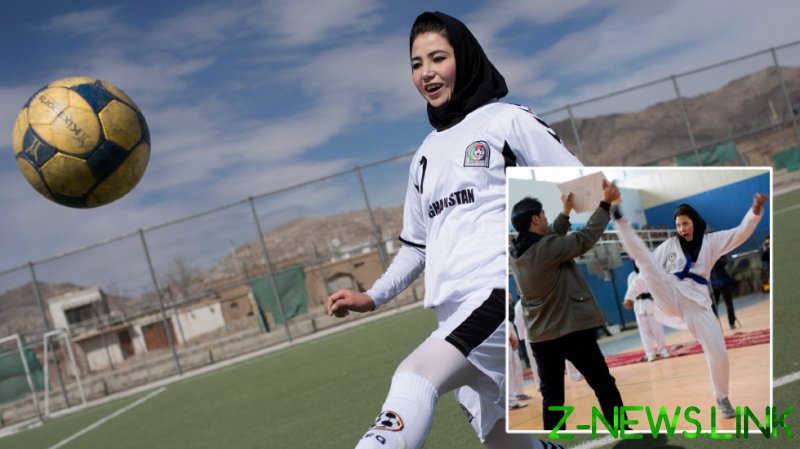 Exiled pioneer Khalida Popal says she has received desperate calls and videos from women during a turbulent period that culminated in the former rulers of Afghanistan entering the capital, Kabul, to take over again earlier this week.

Popal originally fled when the group gained power in 1996 and had been living in a refugee camp in Pakistan before returning to the country. In 2007, she played a pivotal role in the establishment of the first Afghanistan women’s international team, which she calls a “proud” and “beautiful” achievement.

Having become a director of the Afghanistan Football Association in 2011, Popal campaigned against Taliban encroachment, receiving death threats to the extent that she describes her life as being in “great danger” until she moved to her current home of Denmark in 2016 after seeking asylum.

“My country, Afghanistan, has collapsed,” says heartbroken Popal, witnessing what is almost certain to be the end of the relatively vibrant women’s game in the country – at least for now.

“The country is taken over by an extremist group of terrorism by the name of the Taliban. The government surrendered. The announcement is made that women and girls are not allowed to work and study.

“All the achievements and sacrifices faded away. The dreamers stopped dreaming and dreams faded into nightmares.

“My heart goes out to each individual in Afghanistan, to all the strong and unbeatable women of my country. I am sorry for being helpless.”

As recently as last month, the Afghanistan under-17 women’s football team were pictured leaving Kabul for the Central Asian Games in Tajikistan in what appears to be a portrait of a healthy involvement in international football.

Two female officials, Farahnaz Jalali and Sonia Nouri, were also photographed heading to the tournament as referees and assistant referees.

Afghanistan’s under-20s were said to have beaten the hosts at those games, with news of their win still visible on an Instagram account that could well be removed imminently, Popal suggests.

“I have been encouraging [everyone] to take down social media channels, take down photos, escape and hide themselves,” she told AP.

“That breaks my heart because of all these years we have worked to raise the visibility of women, and now I’m telling my women in Afghanistan to shut up and disappear. Their lives are in danger.”

The 34-year old has already taken down the Twitter account of the national team in order to avoid those involved being identified, adding that “all the happiness and laughter and hope” is “fading away”.

Another Denmark-based supporter of women’s sport in Afghanistan, top businessman Christian Stadil, has seen at close quarters through his philanthropy the progress that has been made in the country.

“I myself have been down there and have met the proud people and especially the strong women,” says the boss of Danish sportswear giants Hummel.

“It is more than shocking to watch and witness what’s happening down there now. The women we have worked with over the years could relatively freely exercise their passion for the beautiful game, for football, for music and skateboarding – [they] could go to school, university and so on.

“I dare not think about what future they are facing, amplified by the stories I heard down there from people living under the Taliban between 1996 and 2001.

“I was even out at the so-called Olympic Stadium, where a former football player told me about the football matches that were held there, where women at first were neither allowed to attend nor watch, but where the half, in addition, was used to execute people on the field.

“Those in the audience who turned their heads away were whipped and he also told about how difficult it was to play the second half as they slipped around in the blood. This is the regime we potentially see a return to.”

Women were not allowed to leave their homes without a male relative under that previous government, as well as being denied permission to work and forced to wear a full body and face-covering burqa.

Those who defied the rulings risked punishments which were sometimes violent.

Popal helped identify issues such as sexual abuse, death threats and rape that were a part of Afghan sport under the previous national administration. She is urging former activists against the Taliban to do whatever they can to stay safe.

“The women of Afghanistan believed in their promise,” she says of the withdrawal of US troops that prefaced the rapid change of command.

“But they left because there’s no more national interest. Why did you promise? This is what my girls crying and sending voice messages are saying.

“Why not say you would leave like this? At least we could protect ourselves. We would not have created enemies.

“They are hiding away. Most of them left their houses to go to relatives and hide because their neighbors know they are players. They are sitting, they are afraid. The Taliban is all over.

“They keep taking video and photos from the window showing [the Taliban] just outside their home, and that is very sad.”

A spokesperson for world governing body FIFA told Reuters: “We are in contact with the Afghanistan Football Federation and other stakeholders and will continue to monitor the local situation and offer our support in the weeks and months to come.”