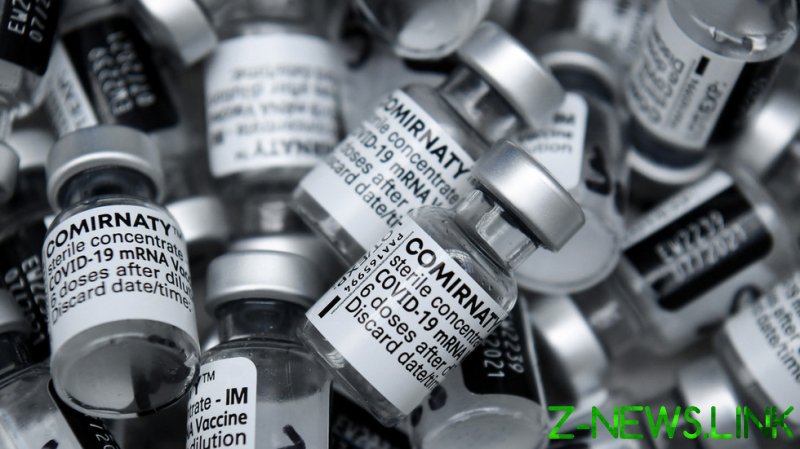 Since the time of Hippocrates, the essential characteristic of a ‘pandemic’ has been universality, that it can infect all populations (from the Greek pan – ‘all’, and demos – ‘the people’). Corollary, preventive, protective, and immunological measures should be distributed across all the populations of the world – which indicates that all governments should assume the primary responsibility for implementing those measures for the public health of their citizens.

With that said, government authorities are not completely autonomous in their decisions. Western governments are bound to geopolitical agreements, taking the form of military alliances, such as NATO, or international political ones, like the European Union (with most of these countries participating in both). At the top of these pyramid constructions, we find the US, either directly represented, or spoken for by their ideological proxies in Europe.

In both the US and the EU, we find a bureaucratic arm in charge of public health issues associated with pharmaceutical ‘control and approval’, meaning they decide which products are to be purchased by the client governments. These entities are a) the US Centers for Disease Control and Prevention (CDC) and the European Medicines Agency (EMA), administratively under the EU leadership.

However, contrary to medical ethics and the spirit of legislation, it is not public health, but instead private profit, which motivates the management, or rather mismanagement, of the severe acute respiratory syndrome coronavirus 2 outbreak, and the resulting fatalities.

Such misconduct has deprived vast sectors of the world’s population of adequate Covid-19 vaccines. Epidemiologically, a vaccination program worldwide, without exclusions, is an essential measure to combat this pandemic. If I had my way, I would make getting vaccinated – with the exception of clinical cases – obligatory for all citizens of all countries.

The problem is, as demonstrated in the current Covid-19 pandemic, that many governments and their public health agencies are not independent in their decision making. As long the response measurements have to do with pharmaceutical products like vaccines, the client governments have solely accepted what has been dictated to them by the supra-governmental agencies.

All of which has resulted in the Manhattan-based company Pfizer selling 3.5 billion doses so far.

Is this because of a higher proven effectiveness and/or safety of the Pfizer vaccine compared with others in the market? No. For example, the Sputnik vaccine, the first ever approved (See article in Lancet, Sept 2020), which has been administrated in over 70 countries, and with effectiveness similar to Pfizer’s and safety second to no other vaccine, has still not been approved by the EMA after months and months of ‘evaluation’.

No wonder then that the Pfizer vaccine has become the dominant product on the ‘world market’ – as if poor countries in Africa or Asia are not part of the ‘world’ – as viewed by corporations and Western governments.

The table below (source) shows the share of the Pfizer vaccine on the international market: 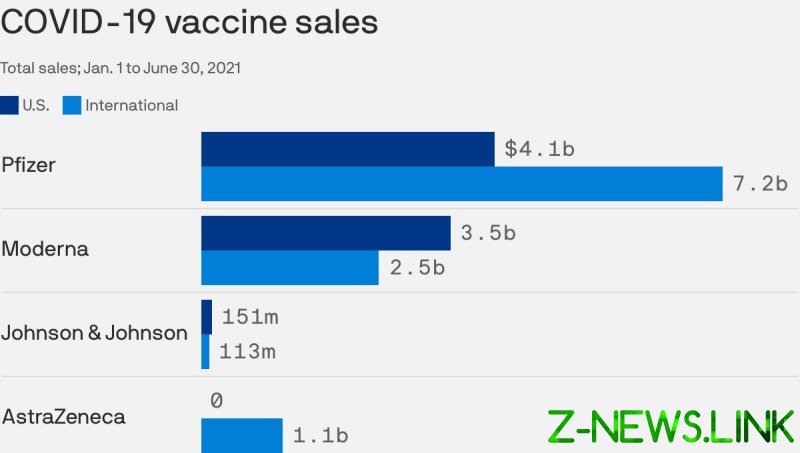 An article by Bob Herman in Axios noted that “Pfizer and Moderna have collected more than 90% of global COVID-19 vaccine revenues,” and that, “Pfizer alone accounts for 60% of worldwide sales. Moderna’s two-dose vaccine, which was 100% funded by the federal government, has more than half of its sales in the U.S.”

However, the question is, how has Pfizer managed to obtain the highest share of Covid-19 vaccine sales in the world?

Public Citizen reviewed six contract cases, so-called ‘confidentiality agreements’, between Pfizer and governments around the world. In one case, Brazilian government officials complained that clauses in the contractual negotiations were “unfair and abusive” on the part of Pfizer.

And what about transparency? According to the Washington Post, Pfizer has 73 contracts for its Covid-19 vaccine. Nevertheless, only five of those deals have been made public by the governments, and only those that have “significant redactions” according to Transparency International.

A publication by the Bureau of Investigative Journalism (BJI) with the headline ‘Held to ransom’: Pfizer demands governments gamble with state assets to secure vaccine deal’, denounced Pfizer for pressing the government of Argentina to the point of making the parliament pass new legislation to protect Pfizer’s interests, and, “In addition to the changes in the new law, it asked Argentina to take out international insurance to pay for potential future cases against the company.” Pfizer also allegedly requested the government of Argentina put up sovereign assets as collateral, including federal bank reserves and military bases. In the words of the former Argentinian minister of health, quoted by the BIJ:

“We offered to pay for millions of doses in advance, we accepted this international insurance, but the last request was unusual: Pfizer demanded that the sovereign assets of Argentina also be part of the legal support.”

Public health in the context of a pandemic should be the entire world’s endeavour, and the beneficiaries of mass vaccination programs should be the people, not the revenue streams of insensitive corporate-owners and the authorities they carry in their pockets.

The medical agencies belonging to countries which at the same time depend on NATO – and its political arm, the European Union – have not processed the evaluation of other vaccines despite them being equally as effective and safe as Pfizer. Besides, the clinical properties of Chinese and Russian-made vaccines, with clinical quality at least in parity with those of Pfizer, are less costly and far easier to store and transport.

Meanwhile, by October 2021, the number of fatalities caused by the coronavirus reached 4,974,36. Only 3.1% of people in low-income countries have received at least one dose.

The poor should not pay with their unvaccinated lives the price of the geopolitical strategy of the Western governments, an insidious cold war to protect the economic interests of greedy corporations which seemingly have them under their control.

Pandemics are, by definition, a worldwide public health phenomena. The medications to combat its symptoms, to immunize the public –vaccines etc- should, ergo, be a global endeavour. Vaccine production should be solely done at state institutions, its research under international scientific cooperation.  Similarly, the distribution of those vaccines should be done under priorities of international public-health interest. Countries with poorer purchasing capability should not be left behind, as it is now the case, where vaccines needed by all have become a commodity to treat and enrich the few. International organizations such as the WHO –which is supposed to represent the entire planet – should absolutely not be partnering with corporations and foundations driven by private interests. Geopolitics should stay away from geopublic-health.