Home / WORLD / ‘The world today needs a Hitler,’ CNN contributor says in now-deleted tweet – but, turns out he had more than one

‘The world today needs a Hitler,’ CNN contributor says in now-deleted tweet – but, turns out he had more than one 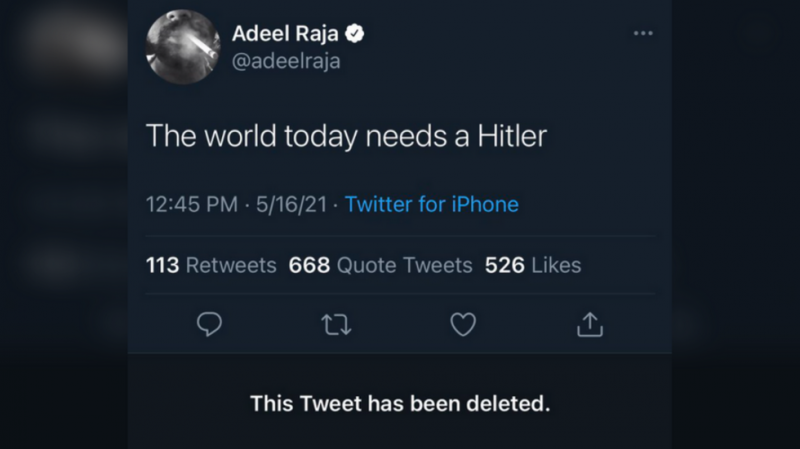 Amid ongoing violence between Hamas militants and the Israeli military, CNN contributor Adeel Raja waded into the debate on Sunday by tweeting – then promptly deleting – “The world today needs a Hitler.”

Raja, whose LinkedIn profile states that he is a “freelance contributor at CNN” is based in Pakistan, and has written articles for the network on Pakistani affairs. His name appears on more than 50 CNN articles, but as of Sunday evening, CNN does not link his name to a profile.

While Raja swiftly deleted his tweet, older posts expressing admiration for the infamous Nazi leader remained online as of Sunday evening. Raja rooted for Germany during the 2014 World Cup because “Hitler was a German and he did good with those jews!” In other 2014 posts he declared that Germans must awaken their “inner Hitler,” and concisely posted “Hail Hitler.”

Confusingly, Raja compared Indian Prime Minister Nerandera Modi to Hitler on numerous occasions, with these comparisons intended negatively. However, he reserved the worst of his scorn for the state of Israel, tweeting in 2014 “ISIS, TTP, TALIBAN – please go to Israel ASAP!”

Even after he deleted his Sunday tweet, commenters online hammered Raja for his apparent Hitler-worship, and attacked CNN for continuing to employ him even after multiple  Fuhrer-posting sprees.

Twitter was also lambasted for suspending former President Donald Trump for calling on his supporters to peacefully protest, but allowing Raja to keep his verified account.

Praising Hitler is not something one would expect from any media outlet, save for absolute fringe websites like the ‘Daily Stormer.’ CNN’s hosts and journalists too have been extremely vocal about the supposed threat of “white supremacists” and “domestic terrorists” in the US, terms generally ascribed to the subset of Trump supporters who rioted at the US Capitol in January.

However, at the time of this article’s publication the network has not commented on the Hitler-supporting tweets of its contributor.