Home / sports / The week in NBA: best acceleration in “Memphis” and “Detroit”

The week in NBA: best acceleration in “Memphis” and “Detroit” 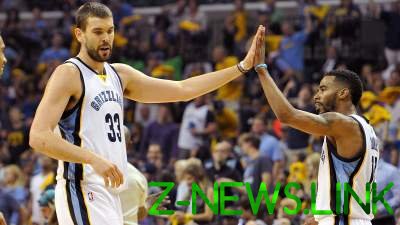 Summing up the results of the starting period of the regular championship of NBA.

In the West it is surprising Memphis team David Fizdale, led by Mike Conley and Marc Gazolem, before the start of the season not quoted among the contenders for the playoffs, but at this stage, “Grizzlies” show that even with such a modest roster can beat Golden state, and Houston, not to mention “Dallas” and “new Orleans”.

Current champion of the NBA and an absolute favourite of the new season of “the Golden state” for two weeks, allowed myself three defeats.
To perebrosali star team, Steve Kerr has been “Houston”, “Memphis” and “Detroit”.

Leadership in unpredictable East suddenly captured the “Detroit” – “pistons” on Saturday completed a victorious series “clippers”, and today punish Golden state for neglecting the defense. One of the best defenders in the League Avery Bradley perfectly fit into a new team at the start of the season’s best efficiency in his career shows Tobias Harris and Reggie Jackson, it seems, undertook to prove that last season was a Fluke.

Favorite conference Cleveland began the season with four defeats in seven matches, and LeBron James and company have managed to lose even the “new York” and “Brooklyn”. The Cavaliers average per game, pass more than 110 points.

The top 5 most productive players of the season: