Home / policy / The war with Turkey is already underway

The war with Turkey is already underway 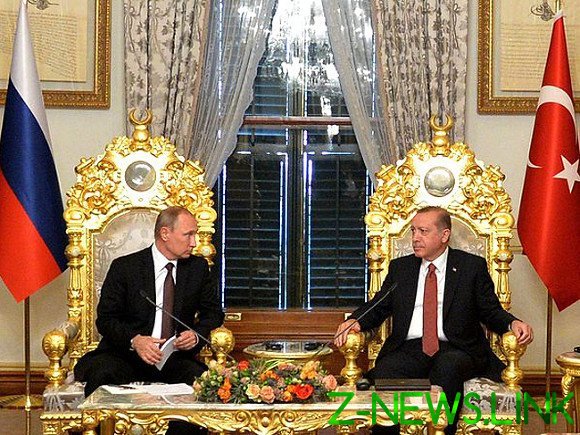 The visit of Recep Erdogan to Moscow in the current environment looks very strange. So it would not be surprising if it will be moved or canceled altogether.

News reports about the fighting in Syria and the military-political situation around it has forced you to forget the question, will the new Russian-Turkish war or not. Such a war is in fact already there for almost a month. Using as a “proxy” on both sides, and directly and directly the armed forces of Russia and Turkey. You can talk about is escalate this war in a larger conflict, or remain at current levels.

Thursday, March 5, in Moscow a scheduled meeting of presidents of Russia Vladimir Putin and Recep Erdogan to resolve the escalation of the war in Idlib — the last area to deescalate the situation in the North of Syria. However, a number of facts indicate that Erdogan may in the Russian capital and not to fly.

First in the Russian media confidently said that these negotiations should take place in the Kremlin. Later on the official website of the Russian President began to indicate a more General location — Russia.

The official mouthpiece of Russian propaganda Russia Today, March 4, confirmed that the talks between Putin and Erdogan should be held and referred to the words of the Turkish President, who gave to the Anadolu news Agency: “Talks should lead to an immediate ceasefire in Syria.” However, these words imply only that the negotiations will be, but it does not follow that they will participate personally Erdogan.

Of course, anything is possible, but in current conditions — after the defeat, which Erdogan gave a few days ago, the Russian-Syrian coalition in Idlib (destroyed dozens of tanks and other armored vehicles, shot down five helicopters, two “Syrian” su-24, black ZRK “Beech” and “Armor”), it would be rather strange if the President of Turkey went to pay homage to Moscow. And exactly what would be regarded now Erdogan’s visit to Russia of his political opponents inside the country and would give this event the Kremlin, which, according to several officials, intends to dictate to the Turkish leader a number of a priori unacceptable conditions.

That Erdogan’s visit to Moscow on March 5 may not occur indirectly may indicate the fact that Turkey seems to be planned on Friday a tripartite summit in Istanbul with the participation of the Turkish President and the EU leaders German Chancellor Angela Merkel and French President Emanuele Makron. However, according to the Kremlin spokesman, Dmitry Peskov, the meeting in Istanbul, the format for March 6 is not planned.

But still, what a moment to talk Putin and Erdogan? Formal — on the settlement in Idlib. The same Peskov, said on 4 March that Moscow would like to come up with Erdogan “in the common understanding of the forerunner of this crisis, the causes of this crisis, the disastrous consequences of this crisis.” And in essence? Essentially, the Kremlin puts forward the ultimatum to Ankara. Stop supporting their “proxy” in this province and generally in the North of Syria, and cease to disrupt the operations of Assad’s army that shelling, in particular, and the Turkish military. With this requirement in the context of recent military defeat of the Russian-Syrian groups, Erdogan’s sounds at least strange.

It is obvious that Moscow and Ankara come from opposite views on the “Baptist” and “causes” of the current escalation in Idlib. According to the Kremlin, the Russian troops are in Syria legally, at the request of its President Bashar al-Assad and troops from other countries illegally (hint, of course, for the Turkish army, but not on Iranian and Pro-Iranian groups). Erdogan, with his usual frankness, said that the Turkish army is in Syria at the request of the Syrian people, not the dictator Assad, and demanded of Putin: “get Out of our way and leave us with the regime [Assad’s] one-on-one. <…> Believe us, we’ll do what we need. And while the (Syrian) people will not offer us to leave, we won’t leave.”

Against the background of these words of Erdogan, in the course of controversy with him, Putin is almost verbatim repeated what was already said some time ago. Namely, that Russia is now in a “unique situation” because ahead of all other countries in the development of new weapons systems. In particular, it was said about hypersonic missiles, recently tested in the Barents sea. Because of this, he continued, “nobody would think to fight with us”. The last statement sounds more like a spell and a threat at the same time, uttered at a time when such a war is already underway.

Erdogan is Putin’s warning, as can be seen, not scared. Expressing once again duty and love of peace, he reminded that Turkey is “able to fight”.

In the background the equivocal words of the Kremlin press Secretary, official representative of Russian Ministry of defense General Igor Konashenkov the day before the scheduled visit to Moscow of the Turkish President with a soldier’s directness, said: “the merged fortified terrorists from Turkish observation posts. Attacks and massive artillery shelling of the neighboring civilian settlements and airfield Hamim steel daily. While Turkey is in violation of international law introduced in Idlib group, with a number of mechanized divisions”.

If this time someone does not understand something, you have to resemble well-known things. In the formulation of the Kremlin, the phrase “splicing fortified terrorists from Turkish observation posts” and “violation of international law”, stated the official representative of the defense Ministry on the main Russian TV channel, mean that these “terrorists” and the Turkish army put on a par. And therefore, “wet” them — now the legitimate right of the Russian army.

Again, it would be very strange if under these conditions, Erdogan flew to Moscow for talks. However, this option (if not fly) to the Kremlin, most likely also provided. If Erdogan will arrive in Moscow will say: see, we to him with all my heart, wanted to talk about a peaceful settlement, but he never came. Well, let expostulates on itself, and. Moreover, something tells us that this option is for the Kremlin, was originally basic.

My colleague has written that the decision about whether to have a big war between Russia and Turkey, will be in Moscow. Who would doubt. Moreover, I think that this decision has been made, and not now, but at least a month ago when Assad began their attacks in Northern Syria. Apparently, the Kremlin decided to decorate the upcoming “referendum” on the infamous amendments to the Constitution another brilliant military victory, forcing the military by “terrorists” and Turkish troops from Idlib by the Syrian army, and the Russian space forces. Of course, as usual, cost the lives of not only hundreds of armed men on both sides of the front, but hundreds of thousands of innocent women, children and the elderly.

It is clear that the Russian military has seized the revanchist and with his commander in chief want to prove that they are the coolest in the world. However, the price for this rebellion (and on the part of Putin and Erdogan) can be much higher than it is now someone seems.

Some experts point to the low probability of a major war, since Russia and Turkey, they say, are objectively interested in economic cooperation. However, learn the history, gentlemen! In 1914, the main Russia’s trade in Europe were in Germany, that has not prevented a major war between them.

Another lesson of the last hundred years shows that the ambitions of the authoritarian leader can be stopped only others in the same authoritarian leader. It is clear that no one wants to even think that everything will go this way. Too scary all this is. But history has its own logic of development.

Of course, you can say that to start a major war in the age of technologies such as our inadequate action. But who said that those who do, adequate? In addition, they the war and and did not untie, and get drawn into it step by step. Unlike later interpretations, it always was. Under the guise of national interests, but guided by personal and corporate, “strong” personality sucked his and other people’s countries and peoples in big trouble. Nothing new.