Home / WORLD / The war is over … Global Capitalism triumphs!

The war is over … Global Capitalism triumphs! 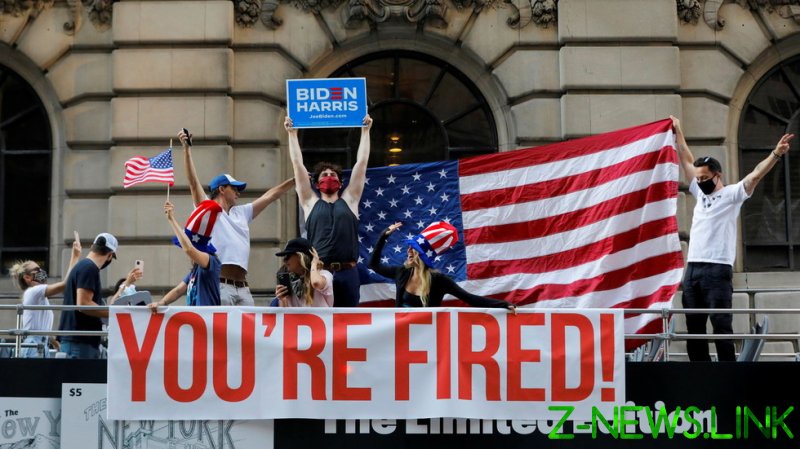 This article was originally published by Consent Factory.

Hour after hour on election night, states on the map kept turning red, or pink, or some distinctly non-blue color. Wisconsin … Michigan … Georgia … Florida. It could not be happening, and yet it was. What other explanation was there? The Russians were stealing the election again!

But, of course, GloboCap was just playing with us. They’re a bunch of practical jokers, those GloboCap guys. Naturally, they couldn’t resist the chance to wind us up just one more time.

Seriously, though, while I enjoy a good prank, I still have a number of liberal friends, many of whom were on the verge of suffering major heart attacks as they breathlessly waited for the corporate media to confirm that they had successfully voted a literal dictator out of power. (A few of them suffer from IBS or other gastrointestinal disorders, so, in light of the current toilet-paper shortage caused by the Return of the Apocalyptic Plague, toying with them like that was especially cruel.)

But, whatever. That’s water under the bridge. The good news is, the nightmare is over! Literal Hitler and his underground army of Russia-loving white supremacists have been vanquished! Decency has been restored! Globalization has risen from the dead!

And, of course, the most important thing is, racism in America is over … again!

Yes, that’s right, folks, no more racism … kiss all those Confederate monuments goodbye! The Democrats are back in the White House! According to sources, the domestic staff are already down in the West Wing basement looking for that MLK bust that Trump ordered removed and desecrated the moment he was sworn into office. College kids are building pyres of racist and potentially racist books, and paintings, and films, and other degenerate artworks. Jussie Smollet can finally come out of hiding.

OK, granted, they’re not going to desegregate liberal cities or anything crazy like that, or stop “policing” black neighborhoods like an occupying army, or stop funding schools with property taxes, but Kamala Harris is black, mostly, and Grampa Joe will tell us more stories about “Corn Pop,” the razor-wielding public-pool gangster, and other dangerous black people he hasn’t yet incarcerated, so that should calm down all those BLM folks.

In the meantime, the official celebrations have begun. Assorted mass-murdering GloboCap luminaries, government leaders, and the corporate media are pumping out hopey-changey propaganda like it was 2008 all over again. Pundits are breaking down and sobbing on television. Liberal mobs are ritualistically stomping Cheetos to the death in the street. Slaphappy hordes of Covidian cultists are amassing outdoors, masks around their necks, sharing champagne bottles and French-kissing each other, protected from the virus by the Anti-Trump Force Field that saved the BLM protesters last summer. It’s like V-Day, the fall of the Berlin wall, and the Bin Laden assassination all rolled into one!

All of which is understandable, given the horrors of the last four years, the concentration camps, the wars of aggression, the censorship, the CIA murder squads, the show trials, and all that other dictator stuff. On top of which, there was all that white supremacy, and that anti-Semitism, and that horrible wall that transformed America into an “apartheid state” where people were imprisoned in an open-air ghetto and gratuitously abused and murdered. (Whoops, I think I screwed up my citations … maybe double-check those links.)

But let’s not dwell on all those horrors right now. There will be plenty of time for all that later, when Donald Trump is hauled into court and tried for his crimes against humanity, like all our previous war-criminal presidents.

No, this is a time for looking ahead to the Brave New Global-Capitalist Normal, in which everyone will sit at home in their masks surfing the internet on their toasters with MSNBC playing in the background … well, OK, not absolutely everyone. The affluent will still need to fly around in their private jets and helicopters, and take vacations on their yachts, and, you know, all the usual affluent stuff. But the rest of us won’t have to go anywhere or meet with anyone in person, because our lives will be one never-ending Zoom meeting carefully monitored by official fact-checkers to ensure we’re not being “misinformed” or exposed to “dangerous conspiracy theories” which could potentially lead to the agonizing deaths (or the mild-to-moderate flu-like illnesses) of hundreds of millions of innocent people.

But let’s not count our chickens just yet. As much as you’re probably looking forward to life in the Brave New GloboCap Normal, or the Great Reset, or whatever they end up calling the new pathologized totalitarianism, it isn’t a fait accompli quite yet … not until Russian-Asset Hitler has been thoroughly humiliated and removed from office, and anyone who voted for him, or didn’t believe he was literally Hitler, or a Russian asset, or who otherwise refused to take part in the mindless, corporate-media-generated Anti-Trump Hate-Fest, has been demonized as a “racist,” a “traitor,” an “anti-Semite,” a “conspiracy theorist,” or some other type of “far-right extremist.” That’s probably going to take another couple months.

I’m pretty certain the plan is still to goad Trump into overreacting and trying to resist his removal from office. And I do not mean just in the courts. No, after all the money, time, and effort that GloboCap has invested over the last four years, they are going to be extremely disappointed if he just slinks away without going full-Hitler and starting a second civil war.

As I’ve been saying, over and over, since he won the election, GloboCap needs to make an example of Trump to put down the widespread populist rebellion against global capitalism and its ideology that started back in 2016. And no, it doesn’t make any difference whether Donald Trump is actually a populist, or whether people realize that it is global capitalism and not “cultural Marxism” that they are rebelling against.

According to the script, this is the part where Trump refuses to respect “democracy” and has to be forcibly dragged out of office by the Secret Service or elements of the military, ideally “live” on international television. It may not end up playing out that way (Trump is probably not as dumb as I think), but that’s the Act III scenario for GloboCap: the “attempted Trump coup,” then the “perp walk.” They need the public and future generations to perceive him as an “illegitimate president,” a “usurper,” an “intruder,” an “imposter,” an “invader” … which, he is. (Being rich and famous does not make you a member of the GloboCap Power Club.)

The corporate media are already hard at work manufacturing this version of reality, not only in the content of their “reporting,” but also with the unbridled contempt they are showing for a sitting president. The networks actually cut him off in the middle of his post-election address. The Twitter Corporation is censoring his tweets. What could possibly be more humiliating … and indicative of who is really in charge?

Meanwhile, the GloboCap propaganda has reached some new post-Orwellian level. After four long years of “RUSSIA HACKED THE ELECTION!” … now, suddenly, “THERE IS NO SUCH THING AS ELECTION FRAUD IN THE USA!”

That’s right, once again, millions of liberals, like that scene in ‘1984′ where the Party switches official enemies right in the middle of the Hate-Week speech, have been ordered to radically reverse their “reality,” and hysterically deny the existence of the very thing they have been hysterically alleging for four solid years … and they are actually doing it!

At the same time, the Trumpians have been reduced to repeating, over and over, and over, that “THE MEDIA DOES NOT SELECT THE PRESIDENT,” and “BIDEN IS NOT THE PRESIDENT ELECT,” and other versions of “THIS CAN’T BE HAPPENING.”

I hate to rub salt into anyone’s wounds (particularly those whose faces are currently being stomped on by GloboCap’s enormous boot), but, yes, this is actually happening. Second civil war or no second civil war, this is the end for Donald Trump. As Biden and the corporate media keep telling us, we are looking at a “very dark winter,” on the other side of which a new reality awaits us … a new, pathologized, totalitarian reality.

Call it the “New Normal,” or whatever you want. Pretend “democracy has triumphed” if you want. Wear your mask. Mask your children. Terrorize them with pictures of “death trucks,” tales of “Russian hackers” and “white supremacist terrorists.” Live in fear of an imaginary plague (or perhaps a non-imaginary plague if that “very dark winter” comes to pass). Censor all dissent. Ban all protests. Do not attempt to adjust your telescreen. Click on the link to join the Zoom meeting. Have your password and your identity papers ready. Watch your pronouns. Get down on your knees. It’s GloboCap Uber Alles!