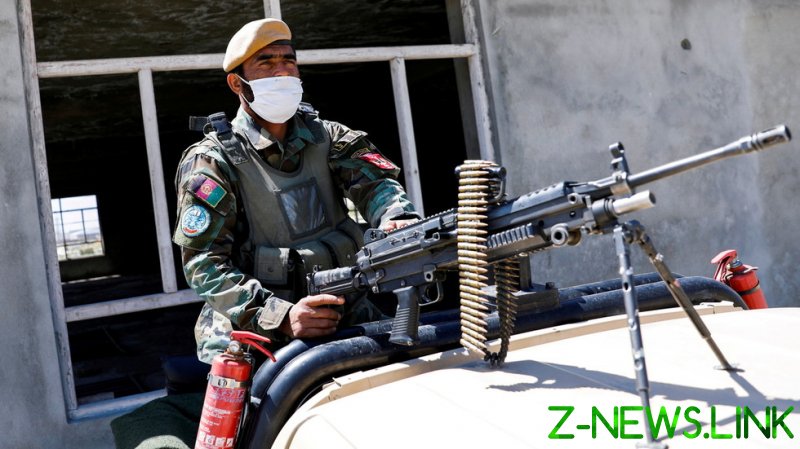 After two decades and trillions of dollars dedicated to training the Afghan military to stand on its own two feet and prevail in combat against the Taliban and other Islamic insurgencies, the Chairman of the US Joint Chiefs of Staff, General Mark Milley, was unable to provide a straight answer to whether or not the Afghans would be able to fight on once US and NATO forces complete their withdrawal later this year.

“I think there’s a range of scenarios here, a range of outcomes, a range of possibilities,” Milley told reporters. “On the one hand you get some really dramatic, bad possible outcomes. On the other hand, you get a military that stays together and a government that stays together. Which one of these options obtains and becomes reality at the end of the day? We frankly don’t know yet. We have to wait and see how things develop over the summer.”

The US withdrawal is afoot. Just this week the US military completed pulling out from Kandahar Airfield, once home to thousands of troops and scores of aircraft. The base was used as a springboard to more austere operating positions in central and southern Afghanistan. Kandahar, Afghanistan’s second largest city, was also the birthplace of the Taliban movement. If Kandahar, and the rest of Afghanistan, is to remain free from Taliban control, it will be up to the Afghan military to achieve that outcome.

“It was all an Afghan plan, Afghan intelligence, Afghan air force and one of our special forces units,” Afghan General Sami Sadat told reporters of the night-time raid, which freed 50 prisoners held by the Taliban last month.

But the forces deployed by General Sadat were the exception, John Sopko, the special inspector general for reconstruction in Afghanistan, recently told the US Congress, not the rule. While the Afghan special operations forces and air force have both performed well in an independent mode of operations, it is only because the US troops who trained them did not follow the standard 6-9-month unit rotation cycle other US forces did. US Special Forces soldiers worked with the same Afghan units over repeated deployments, as did the Air Force cadre of airmen that trained Afghan aviators.

As for the rest of the Afghan military, Sopko had a differing assessment. “The Afghan military, and particularly the Afghan police,” Sopko testified, “has been a hopeless nightmare and a disaster.” The primary reason for this, Sopko recently said in an interview, is that the US tried “to build an Afghan Army in our own image and likeness. In other words an Army that uses the systems and the equipment and the weapons that our army does. And yet, this is a country where a huge portion of the population are illiterate, where there’s very little electricity, and very little internet.”

By way of an example, just last year the US military awarded a $14-million contract for an internet-based system designed to help Afghan forces keep track of their vehicles and weapons. Out of 191 storage sites funded by this initiative, 78 were not in use because they had neither electricity nor an internet connection.

But lack of internet connectivity is the least of the Afghan concerns. “Currently, the Afghan government has limited capability to move food, ammunition, medical supplies, and so on, to units in the field,” Sopko added.  “The Afghans also lack any capability to maintain their equipment. Without development of these core functions, the [Afghan military] will never be able to sustain itself.”

In January of this year, the Afghan air force had just under half of its required number of aircraft maintenance personnel. Even with US contractor support, only 136 of 167 aircraft were usable. This number is expected to drop precipitously once the US withdraws Department of Defense contractor support.

The US is looking at ways to overcome this issue. “We’re examining alternatives to assist the Afghans and their maintenance effort from a distance,” General Frank McKenzie, commander of US Central Command, responsible for all US forces in the Middle East and Southwest Asia, recently told reporters. “I don’t want to minimize that problem or,” he noted, “make it appear easier than it’s going to be.”

One issue centered around maintaining the Afghan air force. “Aircraft maintenance is typically done at a centralized location. We might be able to work some remote, televised way to do that.” This will not be easy, McKenzie observed, adding that “it’s going to be a lot harder to do once you’re out of the country.”

The biggest problem facing McKenzie, however, is that even if he were able to set up some sort of “over the horizon” remote televised maintenance program, the Afghans simply are not up to the task. The US military has, for the past two decades, been focused on “short-term mission objectives,” John Sopko told Congress, rather than developing an Afghan capability to sustain their own equipment. Sopko noted, “US military advisors would provide routine maintenance and repairs to Afghan equipment so the [Afghan military] could conduct additional missions.” As a result, the Afghans lack a viable logistics infrastructure, and there is no time left to build one. According to Sopko, the Department of Defense “has acknowledged that building an organic Afghan aircraft maintenance capability is a years-long process. Training a fully qualified routine-level maintainer can take up to 18 months, and an advanced-level maintainer up to 7.5 years.”

As bad as things are for the Afghan Air Force, it is even worse for their ground forces. As of December 2020, the Afghan army was completing about 20% of its vehicle maintenance work, resulting in the near total atrophy of the Humvee vehicles it uses for battlefield mobility. Once US maintainers leave, the Afghan vehicle fleet will virtually cease to exist.

But being denied US-style mobility is nowhere near the biggest challenge facing the Afghan military. Motivated Afghan government forces using the same pick-up trucks and motorcycles used by the Taliban, would be able to successfully continue the fight. But the operative word is “motivated.”

As John Sopko told Congress, “The problem is that below that corps level, below that officer level, you have a lot of corruption, a lot of incompetence and it’s seriously hurting the Afghan military. The biggest problem is not casualties; it’s desertion–people disappearing. Or, it’s people who never existed who we’re paying their salaries.”

A basic tenet of military leadership is to care for your troops. This concept is virtually non-existent in a good percentage of the Afghan military. According to Sopko, many Afghan troops are not being paid or fed, adding, “they have to buy their own food from their officers, who steal it from them.”

The fact of the matter is that General Milley knows all of this, which is why his answer to reporters was disingenuous. There are, it seems, only bad outcomes for the Afghan military, and by extension the Afghan government, once US forces complete their withdrawal later this year.