Home / WORLD / The US’ persecution of Venezuelan envoy Saab, arrested in Cabo Verde, has nothing to do with alleged money laundering 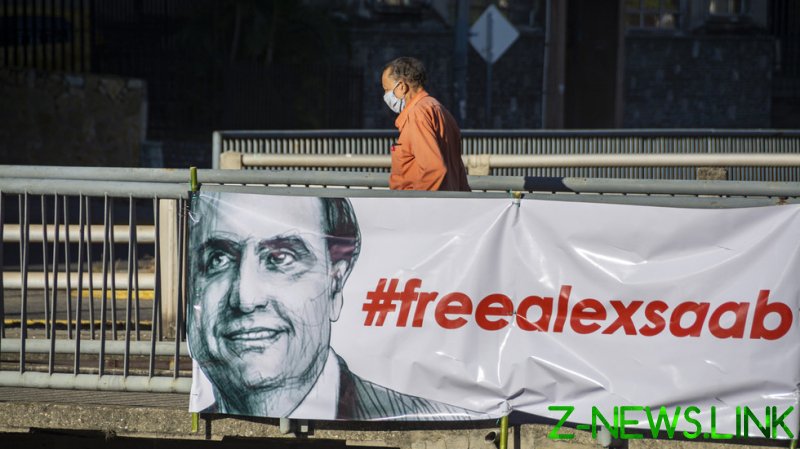 Saab is now awaiting extradition to the US on alleged money laundering charges. While the allegations against him are hotly disputed, what is not in doubt is that the US is behind his persecution. It is also clear that it is interested in him not because of any alleged crimes, but because he may hold the key to Venezuela’s ability to navigate the US’ deadly unilateral sanctions. In the meantime, the tiny nation of Cabo Verde is the pawn in the American imperial game.

As a Bloomberg article explains: “Saab was detained June 12 [2020] when the private plane he was traveling on from Venezuela to Iran made a fuel stop on the Cape Verdean island of Sal.” What it does not mention is that Saab’s plane was forced to land in Cabo Verde because two other nearby nations in mainland Africa, apparently under pressure from the US, had refused to let him land.

Curiously, the US has no extradition treaty with Cabo Verde. Moreover, while the Cabo Verde authorities have claimed that Saab was detained pursuant to a valid Interpol notice, a regional court in Nigeria found that the detention took place before the Interpol notice was issued, raising huge concerns about the validity of his detention and imprisonment. Indeed, this regional court, the Economic Community of West African States Court of Justice, explicitly “ruled that Saab should be freed because he was detained before the Red Notice was issued.” However, as Bloomberg adds, “Decisions by that court are final and binding under a 1991 protocol.”

On June 8, 2021, the UN Human Rights Committee also issued a decision for preliminary measures, demanding that the extradition be suspended and that Saab, who is suffering from cancer, be given the necessary medical attention, which he is currently being denied.

When arrested in Cabo Verde, Alex Saab, President Nicolas Maduro’s envoy to the African Union, was on his way to Iran to negotiate the exchange of Venezuelan gold for much-needed gasoline supplies. Due to US sanctions, the oil-rich nation of Venezuela is unable to obtain the necessary chemicals and supplies to refine its oil into the gasoline needed to generate electricity and transport goods across the country. In addition to gasoline, Saab was also attempting to negotiate the purchase of food, medicines, and other critical supplies that have also been made scarce due to US sanctions.

As explained by Alena Douhan, the UN Special Rapporteur on the unilateral use of coercive measures on the enjoyment of human rights:

“The hardening of sanctions faced by the country since 2015 undermines … the state’s capacity to maintain infrastructure and implement social projects. Today, Venezuela faces a lack of necessary machinery, spare parts, electricity, water, fuel, gas, food, and medicine. Venezuelan assets frozen in United States, United Kingdom and Portuguese banks amount to US$6bln. The purchase of goods and payments by public companies is reportedly blocked or frozen …

It has been reported that electricity lines are able [only] to work at less than 20% of their capacity today. . . .

An estimated 90% of households are connected to the national water distribution system. Numerous households, however, report frequent cuts because of electricity outages affecting water pumps and the maintenance of infrastructure, and because of the shortage of qualified maintenance staff.”

It appears to be Saab’s very adeptness in helping Venezuela get around these sanctions – sanctions that Douhan notes are illegal under international law – in order to obtain crucial humanitarian supplies that is the real reason for the US’ interest in having him detained and extradited.

Indeed, an article in the New York Times makes this quite clear. It explains that, while the US has brought vague money-laundering charges against Saab, “hard-liners at the Justice and State Departments, including Elliot Abrams, the State Department’s special envoy for Iran and Venezuela,” want to insure his continued detention in Cabo Vere lest they “lose an opportunity to punish Mr. Maduro.” As the Times continues: “The months-long detention of Mr. Saab has stripped Mr. Maduro of an important ally and a major financial fixer at a time when fewer countries are willing or able to come to Venezuela’s aid. If Mr. Saab cooperates with American officials, he could help untangle Mr. Maduro’s economic web of support and assist the authorities in bringing charges against other allies of the Venezuelan government.”

And how is the US ensuring Cabo Verde’s compliance in all this? It’s using old-fashioned ‘gunboat diplomacy.’ Thus, as the Times explains, the US has anchored the navy cruiser USS San Jacinto off the coast of Cabo Verde to make sure Saab doesn’t somehow escape. While US officials claim they are doing this in response to “threats” by Venezuela to take all measures to protect Saab’s human rights, the presence of the gun ship appears calculated as much to coerce Cabo Verde as it is to prevent some rescue attempt by Venezuela or its ally Iran.

And, so, while Saab remains in indefinite lockup with untreated cancer at the insistence of the US, Cabo Verde itself is suffering its own bullying at the hands of the US. The US’ actions in this regard are nothing but the last gasps of an empire in distress and impending collapse. As such, they must be resisted.