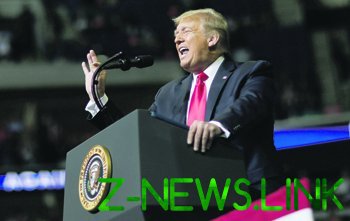 Donald trump ordered the leadership of the two leading U.S. intelligence (the CIA and national security Agency) informed the U.S. Congress about the available information on the alleged collusion of the Russian military intelligence and the Taliban. However, without waiting for the briefing of the security forces, the Democrats demanded that the sanctions against Russia.

To give the floor to guide us intelligence trump decided after his unsuccessful attempt to explain to the congressmen. We will remind that on June 26 in the New York Times published an article which, citing anonymous sources in the American intelligence services, claimed that Russian military intelligence paid Taliban (banned in Russia) for attacks on NATO military in Afghanistan. Later, the newspaper added their information. She called the name of a mediator between Russia and the Taliban is an Afghan drug dealer Rahmatullah Azizi. In addition, it is clarified that Russian money killed at least two American soldiers. And most importantly, the newspaper claimed that the President of the United States intelligence agencies reported on the existence of such “order”. But he ignored the report.

Trump and the White house categorically denied these Newspapers (as well, incidentally, have entered Russia and the Taliban). The official version of the US administration is this: maybe the security services and had similar information, but as there were serious doubts as to its authenticity, it has not been reported.

It was told on passed a few days ago a closed briefing at the White house for the eight congressional Democrats. At its end, the leader of fraction of party in the House of representatives Congressman Steni Hoyer said that he and his colleagues are not satisfied with the level of cooperation with the head of state. They demanded that the intelligence they announced themselves the leaders of intelligence, and not trump and his entourage. After some delay the President went to meet them.

Closed briefing by CIA Director Gina had Haspel and Director of the national security Agency Paul Nakasone is scheduled for Thursday at 11.30. At the time of signing of this paper it has not been completed. The event was attended by the leadership of both houses of Congress – the lower house of representatives, where the majority of the Democrats, and the upper, the Senate, which is controlled by the President’s party members, Republicans.

Any prior statements Haspel and Nakasone did not. But one of the most active in the media members of the Democratic party, the speaker of the house of representatives Nancy Pelosi have preferred not waiting for the briefing of the security forces, to speak. “We must impose sanctions against Russia and to do it immediately,” she said in an interview with MSNBC. It is known that Pelosi said on June 29 with Haspel and curator of all U.S. intelligence Director of National intelligence John Ratcliffe. Judging by the statement of the speaker itself, she was asked to speak at the house Committee on intelligence. It was there last year the investigation began, which led to the attempted impeachment Trump.

What sanctions can be applied against Russia if the appeal will be heard Pelosi, you can imagine. In June, the Republican study Committee (Republican Study Committee, RSС) introduced in the House of representatives of the 120-page report: “Strengthening America and combating global threats.” RSC is the most authoritative Association of Republican politicians. It includes 147 out of 197 members of the party in the House of representatives. Therefore, its report may be considered as the starting point of discussions with the Democrats on the question of policy towards Moscow.

The document States that all measures undertaken by the U.S. government to contain Russia, failed. Therefore, congressional Republicans consider it necessary to introduce a new “infernal” sanctions. In particular, the report proposes to cut off Russia, as previously Iran, from interbank SWIFT system, to include in the sanctions list of the state Corporation VEB to impose sanctions against Russian sovereign debt, as well as significantly expand the list of persons against whom the restrictions are imposed. Important point: the report proposes to punish the allies of Russia in the former USSR. In principle something similar imposed on Syria: “Caesar’s Law” was passed recently in the US, punishes for the mere fact of cooperation with the regime of Bashar al-Assad.

The report is a set of recommendations, not laws. To develop specific legislative initiatives will take a long time, so Congress may simply not meet the deadline before the November election.

But, according to chief research officer of the Institute of USA and Canada Vladimir Vasiliev, the chances for a speedy adoption of the bill on the recognition of Russia a sponsor of terrorism. This will happen if, of course, intelligence agencies are in fact present some evidence suggesting that Russia is in collusion with the Taliban. Now the status of the country – sponsor of terrorism in the United States are Iran, Sudan, Syria and North Korea. This status gives the right to impose special sanctions: for example, a ban on the sale of dual-use goods. Finally, the country – sponsor of terrorism victims of terrorist acts can sue in American courts. That is, the relatives of those killed in Afghanistan, American soldiers will have the right to sue the Russian government to arrest and his property and the property of citizens of the Russian Federation, which will be within reach of American justice.