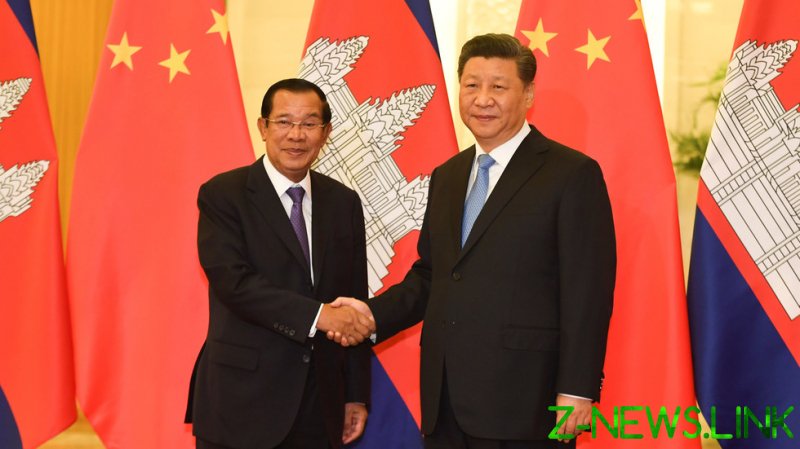 Cambodia is a country with a tragic and turbulent recent history. Its contemporary politics are defined by the horrific memories of the Khmer Rouge, an intra-Communist proxy conflict backed by China and Vietnam, and a short-lived return to democracy and constitutional monarchy. It is just one stark example of many countries that have struggled to find a stable form of existence following colonialism and independence.

This has led to Hun Sen, the country’s leader since 1985, consolidating his 36-year tenure over the state. In doing so, he has wrestled away from Vietnam’s long-standing hold over his country and pivoted Cambodia towards Beijing.

Cambodia, as a small, poor and authoritarian-leaning state, is arguably the most pro-China state in Southeast Asia today, which is significant in the wake of America doubling down in the region to try to counter Beijing. As of last year, China constitutes 70% of Cambodia’s infrastructure investment and 45% of its foreign direct investment overall.

Sceptical of neighbouring Hanoi and having only a small coastline, Phnom Penh is not a party to the South China Sea disputes and subsequently has no need to hedge military ties with the US as some maritime regional countries have done. Instead, it has been happy to embrace China as a vehicle of political support and economic development. The two countries signed a bilateral trade deal last year.

Yesterday, a group of bipartisan US senators including Marco Rubio, Dick Durbin, and Ed Markey introduced the “Cambodia Democracy and Human Rights Act” – pretty standard fare for these senators – which demands sanctions on Cambodian officials for alleged human rights abuses, and also demands an inquiry into “China’s activities in Cambodia” and how Beijing “may be undermining democracy and human rights” in the country.

It’s obvious strategic opportunism, and it comes amid a demand by the United States to force Cambodia to give them full access to inspect a naval base there, which they argue is being used by China. Phnom Penh has refused, but the US demand is an extremely intimidating act which puts the country in an increasingly uncomfortable position. It is also arrogant because Washington believes it has the right to militarize the entire region, building military bases all around China, but seeks to put pressure on local countries who may instead favour a Chinese military presence as if it were completely unacceptable. Could you imagine any country demanding to inspect overseas US military bases, or that of its allies?

Cambodia is not a bastion of human rights; its history speaks for itself. However, America’s attempts to use the “human rights stick” to beat this country is motivated by its desire to contain China. Cambodia’s size and its lack of leverage against the US is its main vulnerability.

While Washington is happy to give a pass to other authoritarian states in Asia if they are prepared to meet US preferences vis-a-vis China, such as Vietnam or Brunei in respect to the South China Sea, they will throw mud against any state that is deemed to be siding with Beijing.

The US is not going to the full extent of a regime change against Cambodia as there is little value to taking it that far; it isn’t particularly threatening. Rather, the US ambition is to slowly “twist it” in its direction.

It may be an exercise in futility. Cambodia needs a lot of investment and economic development as it tries to overcome its grim historical legacies, and right now Beijing has what it needs, not just because of the logic of geography, but also because it suits Hun Sen’s government to have it that way. As the veteran leader himself said earlier this year: “If I don’t rely on China, who will I rely on?”

Hun Sen, 69, a former junior commander in the Khmer Rouge (he lost an eye during the fighting to take Phnom Penh) before turning against Pol Pot, may have reason to be wary of Americans bearing gifts. After all, during the Vietnam war, the US secretly dropped 110,000 tons of bombs on his country between 1969 and 1970, including on the birthplace of the then teenage Hun Sen.

In contrast to what Washington seeks, China’s investments and aid are not seen as coming with political strings attached that demand change. As an example, Cambodia last year lost duty free access to the EU market due to “human rights” concerns; this is a clear illustration of how big Western powers treat Cambodia differently from, say, Vietnam.

The US and its allies feel that they lack a “foothold” in Cambodia (hence their concerns over the military base) and their strategy is to incentivize change to “get in the door”, make a mark on the country’s internal politics and push China out. If they can flip Cambodia from being a pro-China country to a more neutral one, that will be seen as making progress on containment. They perceive the country to be a “pawn” belonging to China on the strategic chessboard which needs to be removed as a nuisance, or, in Cold War terms, a state increasingly in China’s “orbit”.

Overall, this serves to demonstrate the less-than-honest and often manipulative ways that America treats smaller countries in its sights, and its two-faced approach to how human rights are used as a foreign policy weapon.