Home / WORLD / The US has tricked Ukraine into believing NATO would ride to rescue in case of war with Russia. How long can it keep up the act? 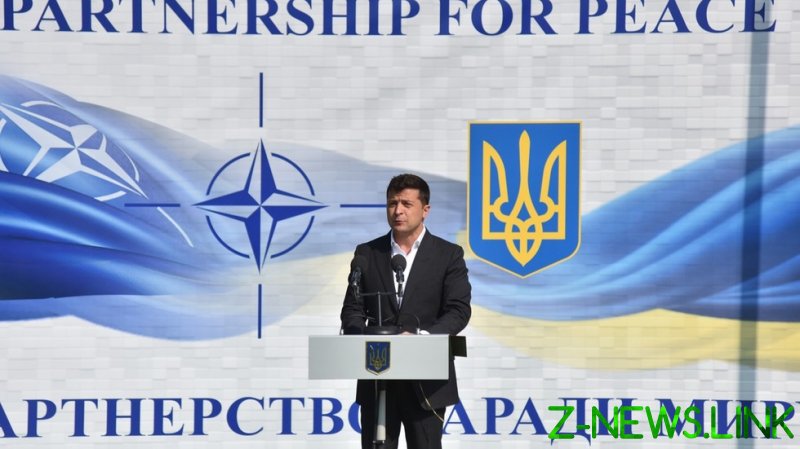 Joined-up government is not one of America’s strong points. While one arm of the system does one thing, the other arm does something different, often entirely contradictory to the first. At times, they even deliberately undermine each other. Different bits of the bureaucracy have different interests, and only the strongest of leaders can somehow push them all in the same direction.

So it was this week, when US Under Secretary of State Victoria Nuland visited Moscow in an effort to patch up relations with Washington. But while the State Department was seeking to ramp down the tension, the Department of Defense was doing the opposite.

First off, an American warship tried to enter the Peter the Great Gulf in the Sea of Japan – an area that Russia claims as its territorial waters. And then, Defense Secretary Lloyd Austin flew into the Ukrainian capital, Kiev, and made a belligerent speech supporting Ukraine’s bid to join NATO and promising the country continued military support.

Perhaps in response to a statement by Kremlin spokesman Dmitry Peskov saying Ukrainian membership of NATO was a Russian red line that if crossed would provoke a serious response, Austin said no outside party had the right to determine Ukraine’s political choices. Austin also blamed Russia for the war in Donbass, saying, “Let’s be clear, that Russia started this war and Russia is the obstacle to a peaceful resolution.”

Speaking at the Valdai Discussion Club on Thursday, Russian President Vladimir Putin has since said that the visit could “open the door” for Ukraine’s membership of the bloc, and that the West could use training missions as a guise “to shove their missiles under our nose.”

However, Austin was being far from straight with his Ukrainian hosts by dangling the prospect of joining NATO in front of them. For the reality is that Ukraine is as far away from joining the North Atlantic pact as ever, just as it is also nowhere near the 2014 Maidan dream of becoming part of the European Union.

The simple reason for this is that important members of both organizations are resolutely opposed to Ukraine joining their clubs. Germany, in particular, regards Ukrainian membership of NATO as dangerous in light of Russian opposition. Hungary, meanwhile, has very poor relations with Ukraine due to the latter’s policy towards its Hungarian minority. Its foreign minister, Peter Szijjarto, declared last month that Budapest would “block all steps within the European Union that would represent a step forward in Ukraine’s European integration process.” Until Ukraine improved its treatment of its Hungarian population it would be “very difficult” to discuss Ukraine’s accession to NATO, said Szijjarto.

In any case, NATO forbids countries from joining if they have territorial disputes with their neighbors, as Ukraine does with Russia due to Crimea. Ukraine is also pretty much indefensible given its long border with Russia and the latter’s undoubted military superiority. Committing themselves to defend the country in the albeit unlikely event of a war between it and Russia is something that most sane Europeans would not want to do.

In reality, therefore, both NATO and EU membership are off the cards for the foreseeable future. This is something that even Ukraine’s leaders are belatedly beginning to notice. Speaking on TV on Monday, Ukrainian President Volodymyr Zelensky complained that it was no longer even worth his while asking the EU about joining because the answer was bound to be no. This followed similar comments that he made in June about the lack of progress on NATO membership. It appears that reality is slowly beginning to dawn in Kiev.

But only slowly. And that explains Austin’s remarks. From an American point of view, it’s important to keep Ukraine oriented firmly against Russia. There’s a danger that once the authorities in Kiev realize they’ve been had, and that they’ll never get what they want out of the US and its European allies, their enthusiasm for European integration will fade. And when that happens, they might begin to drift back towards Russia.

That has to be stopped. And for that reason, America has to keep pretending that it’s got Kiev’s back and that at the end of the day the door to NATO will miraculously open. Of course, it won’t, but the facade has to be maintained if Ukraine is to be kept in the American orbit.

As Putin said at Valdai, membership of the bloc may well never be realized, but that doesn’t mean Washington can’t get what it wants out of Kiev, while dangling the prospect. At the same time, offering no support in exchange for compliance.

From the American point of view, this is a cynical but cheap and effective policy. Ukraine does America’s dirty work while the US is obliged to give almost nothing in return beyond a tiny bit of financial and military support and some vague indications that something more substantial might be on the way at some indeterminate time in the future.

Quite what Ukraine gets out of it isn’t so clear. Regardless, Zelensky and his team are continuing to buy into whatever it is that the Americans have on offer. One suspects that they are beginning to understand that it’s a con, but they’ve backed themselves into a corner where they can’t admit the truth without a massive loss of face as well as the abandonment of the most valued political aspirations of their core supporters.

And so the farce continues. The Americans throw money, weapons, and promises at Kiev in an effort to compensate it for failing to deliver what they really want, while the Ukrainians pretend to be pleased with receiving the scraps that have fallen from the master’s table. Deep down, perhaps, they all realize it’s fake, but for now at least, nobody wants to be the boy who says that the emperor has no clothes.

How long will this last? Given the strong incentives both sides have to keep up the pretense, probably a very long time. But however long it takes, one suspects there’s a good chance that it won’t end well.