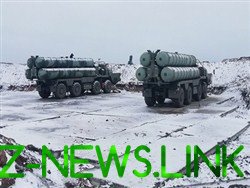 The purchase by Turkey of Russian anti-aircraft missile systems s-400 will lead to “serious consequences.” About the Agency TASS said the official representative of the Pentagon Eric Pahon.

He noted that Washington understands the desire of Turkey to improve its air defense system, however, the acquisition of s-400 will impose limitations for cooperation of Ankara with the US and NATO.

On 8 March a press-the Secretary of defense of the United States Charles summers said that the purchase by Ankara of the C-400 will block the delivery of American F-35 fighter and anti-aircraft Patriot kits. On March 2, an unnamed us official familiar with the negotiations told Bloomberg that Washington has offered Turkey more favourable prices for their Patriot missile defense systems and the joint production than Moscow. However, Ankara continues to look for a reason to back out of the deal.

See also:  Gazprom paid Naftogaz a us $2.9 billion according to the decision of the Stockholm court

On the same day the defense Minister of Turkey, Hulusi Akar has confirmed that the deployment of the C-400 will begin in October of this year. He noted that the purchase of Russian was not a matter of preference but an absolute requirement of national security. “Turkey is obliged to protect 82 million of its citizens,” the military said.

A contract to supply Ankara with the four battalions of s-400 was achieved in September 2017. The contract is worth $ 2.5 billion, but half of this amount will cover the Russian loan.