Home / WORLD / The US’ fury over the China-Europe investment deal shows how rattled & isolated they are. It’s clear who’s been 2020’s big winner

The US’ fury over the China-Europe investment deal shows how rattled & isolated they are. It’s clear who’s been 2020’s big winner 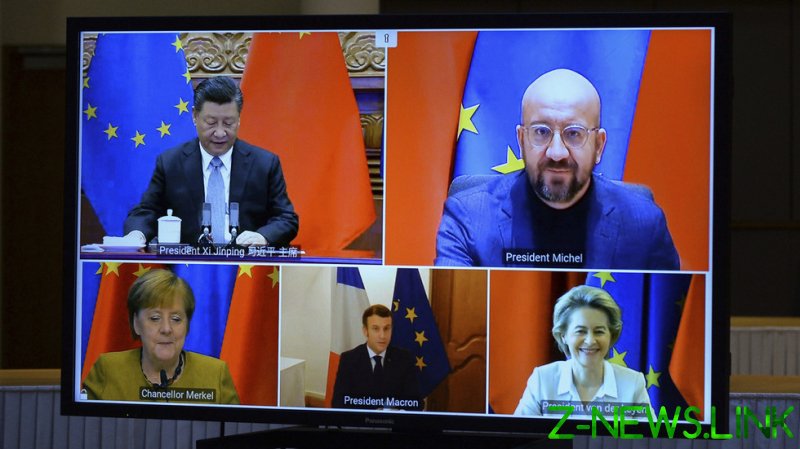 European Union leaders, including Angela Merkel, Emmanuel Macron and Ursula von der Leyen hosted a virtual summit with Chinese leader Xi Jinping on Thursday and sealed a comprehensive EU-China investment treaty. Described as the most “ambitious agreement that China has ever concluded with a third country,” the agreement serves to open up a number of sectors in China to European investment, substantially expanding their market access whilst also preserving Beijing’s existing stake within Europe.

The United States reacted with fury. The signing created a storm of controversy in Washington, with Deputy National Security Advisor Matthew Pottinger descending into a tirade, accusing the EU of disregarding the interests of the US on the eve of a new administration.

Although the deal’s been in the offing for a while, having been negotiated over seven years, Beijing set a goal with the EU to complete it in 2020 and pulled it off. Despite this, the US media had become increasingly complacent that it would not happen, with a pending Biden administration official having last week sought to send a message to the EU to unite against China.

Suddenly, within hours of this deal having been agreed, the Trump administration slapped new tariffs specifically targeting goods from France and Germany. Although these measures are stated to be part of the longstanding dispute between Boeing and Airbus, the timing is no coincidence, and it seems apparent that they are a targeted retaliation against the EU’s deal with China. One that undercuts the US position and rubbishes talk of a “transatlantic alliance” against Beijing, with Commission President von der Leyen stating: “Tomorrow’s post-COVID world needs a strong EU-China relationship, to build forward better.”

The situation represents a cold reality check for the US, and in turn an act of desperation by a losing side which will only serve to deepen the rift between America and Europe that Trump has created. Ultimately, Mike Pompeo’s talk of a “transatlantic awakening” has been exposed as utter drivel and rehashed Cold War nostalgia which has been deeply out of touch with not only the realities of contemporary Europe and the global economy, but how the administration itself has approached these issues. Thus, as 2020 comes to an end, a year where the US has sought to vilify and isolate Beijing but yielded little fruit, the Biden administration now arguably faces an enormous uphill battle if he seeks to fix this “sledgehammer” effort.

The US’ obsession over common liberal values and a shared cultural heritage ignores an increasingly apparent reality that Washington and the EU are, in fact, differing and even competing geo-political actors. This transatlantic fracture has been brewing for a long time, but it has increasingly come to the surface under Donald Trump, who has had no hesitation in treating Europe as a trade competitor and seeing its protected market as a challenge to American interests. Despite this, the US simultaneously has seen European support for its security policies as a given, blinded by the historical legacies of World War II and the Cold War, and the belief that America “saved Europe.”

The White House has been contentious towards the EU, while simultaneously attempting to arm-twist it into compliance in its neo-Cold War against China, with Pompeo arguing that they have an obligation to do so as “free nations.”

Europe isn’t gullible enough to believe that, though. For example, the US has been using semiconductor sanctions on Huawei to block European companies from doing business with it, whilst issuing exceptions to American companies to seek to dominate the market. As a result, it may be construed that the US and EU are in fact competing against themselves over China, and thus it is no surprise that EU officials have shown no interest in siding with a trajectory which only serves to benefit the United States. Now, they can claim victory for choosing the path of negotiation over a rhetoric of threats.

The result is that the American position, despite all the fiery rhetoric, is increasingly isolated when it comes to China. It’s demanded other countries decouple and cut ties with Beijing in the same way it is doing, but the opposite is happening, because it’s really about US interests first above everyone else, rather than ideological solidarity. The fact that they have responded to the EU by slapping on tariffs shows their deep frustration over the fact their China vision is failing to materialize, with their leverage on Beijing having just been sharply reduced.

The result is a further deterioration of transatlantic ties, leaving Biden with a much more difficult task to rebuild them. His new presidency is not going to succeed in this unless it accepts the pragmatic reality very early on that China is not the Soviet Union, but an increasingly dominant economic superpower that countries around the world want to engage with, as opposed to signing up to a zero-sum ideological vision. Despite all the disruption, upheaval, and hatred vented towards Beijing, it’s pretty obvious that they have won 2020, and that Trump contributed to this victory more than anyone else.