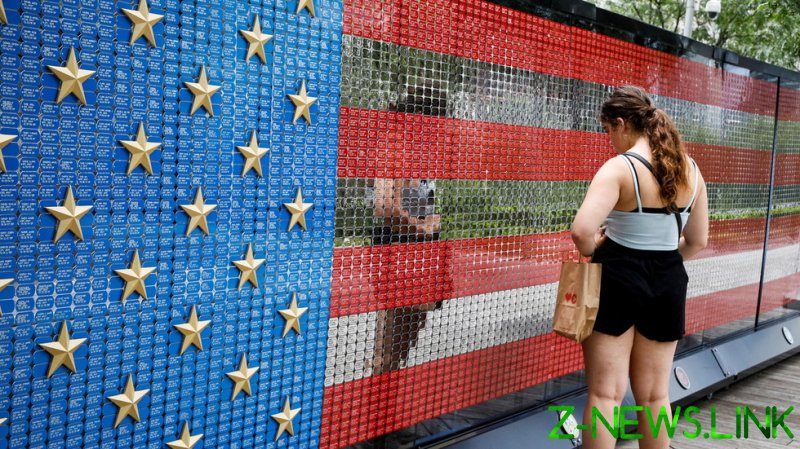 As the 20th anniversary of the 9/11 terror attacks looms this weekend, the Department of Homeland Security wants to make sure you’re afraid – very afraid. Americans, it warned last month, are facing an enemy so drunk on mind-warping conspiracy theories that even the most sophisticated surveillance apparatus in the world can’t stop them.

Subtlety has never been the strong point of the country’s ever-multiplying intelligence agencies and, for the 9/11 anniversary, the government is pulling out the stops for an orgy of fear not seen since the event itself. The recent DHS bulletin warned the surrounding weeks would be marked by a “heightened threat environment” – at least until Veterans Day, when a new excuse will likely be rolled out to be very afraid. It even dredged up al-Qaeda themselves, declaring the terror group had released its first English-language magazine in four whole years, apparently believing American dissidents would be inspired by their country turning tail and fleeing from Kabul.

But the DHS and its ilk have been screaming about terrorism since January 7, the day after hundreds of pissed-off Trump voters and other disaffected Americans stormed the Capitol in what has been retroactively recast as an armed insurrection – in the absence of any arms or of attempts on the life of any legislator. As with September 11 itself, law enforcement agencies are publicly atoning for their supposed catastrophic intelligence failure by cracking down on the dissidents they do know about – the equivalent of closing the barn doors as the last horse gallops across state lines – and papering over the logical gaps with rhetorical bluster. Except, in this case, the “If you see something, say something” of 20 years ago has become the more direct “snitch on your family”.

If the definition of insanity is indeed doing the same thing over and over while expecting different results, the American intelligence apparatus can be said to be well and truly batty. Bringing back home the same “war on terror” tactics that lost the war in Afghanistan, nearly fumbled it in Iraq, and have all but lost it in Syria is asking for yet another massive failure, one that will be much more difficult to recast as victory as its targets need not rely upon untrustworthy news media for information on what is happening outside their doors.

Ordering police forces – already a symbol of incipient US fascism to many after the backlash against police brutality that exploded last summer in the form of Black Lives Matter (and other actual riots) – to deploy these tactics against their fellow Americans almost guarantees a rebellion. And Americans, unlike the goat-herders in dirt-poor Afghanistan, have been stocking up on guns and ammo so much that manufacturers are staring down two-year delays in restocking.

But, while Covid-19 and the 2020 election may have unmasked the extent of the project, the designation of dissident Americans as the enemy has been underway for longer than many believe. Just as the neocons at the Project for a New American Century didn’t wait for the planes to hit the towers to write up their contingency plan for the ‘new Pearl Harbor’ existential crisis that 9/11 became, that group’s spiritual descendants have been cooking up some frightfully draconian legislation while the country was distracted with four years of Trump Derangement Syndrome. Those behind War on Terror 2.0 already have the dystopian tools at hand to wage unprecedented domestic warfare – all they need now is the proper catalyst.

This is why, nine months after the fact, we’re still hearing about the January 6 riot at the Capitol. Never mind that the only victims of that sad-sack demonstration were among the pro-Trump crowd – and that one of the supposed leaders of this big scary insurrection, Proud Boys chief Enrique Tarrio, was a known FBI collaborator. We’re told to fear “white ISIS” anyway, these LARPing boys in black having dropped seamlessly into the terror narrative where al-Qaeda and its boxcutters of doom once stood. It was “the most violent attack since the British burned the Capitol in 1814,” former Bloomberg News editor Albert Hunt wrote in an op-ed for the Hill, joining the tireless chorus that has spent so many months to try to puff up the rally into something it wasn’t.

Indeed, these ‘white supremacists’ – some of whom, to the embarrassment of the FBI and DHS, aren’t actually white – are said to be so dangerous that they must be brainwashed out of their political views if there is any hope of reintegrating them into society.

One need only look at the case of Doug Jensen, one of hundreds locked up in the aftermath of the Capitol protest. Finally released on bail after six months, having promised he’d gotten his mind right and no longer believed in QAnon and others who questioned the 2020 election results, he was caught in his garage earlier this month watching a video of Mike Lindell, a.k.a. “MyPillow Guy,” one of the leading lights (dim as they may be) in the delusional community who believed Trump would be reinstated as president last month. Sending him back to jail for such a minor transgression harks back to the McCarthy era – “are you now or have you ever been a follower of MyPillow Guy?” – and spits in the face of any notion that the country is still, as it stridently claims, ‘Our Democracy.’

The increasingly open trend towards thought reform (brainwashing) as a prerequisite for an innocent verdict (or even bail) should terrify those on the Left as much as it does the Right. But they continue to fiddle while Rome burns, “othering” their ideological foes with dime-a-dozen smears like “white supremacist.” This puts them in bed with their avowed enemies the New York Police Department, which – after being handed unprecedented powers to spy on its own citizens following 9/11 – got on the “white supremacist” hunt early, starting a unit to deal with these types (who are vanishingly uncommon in a proudly multi-cultural city like New York) back in 2019.

Equipped with dystopian technology like super-powered X-ray vans that can see human activity inside a car (or ground-floor home) and the Domain Awareness System, which constitutes the largest network of cameras, license-plate scanners and other sensors in the world, the department has primarily been using the weapons of war to bust petty criminals. One need only look at the spike in crime the city has seen over the past two years to be reminded that this tactic simply does not work – but then, that assumes the purpose is to bring down crime statistics.

The New York Times notes that “it is almost impossible to overstate how profoundly the [9/11] attacks changed American policing,” particularly in New York, which seems to be sliding into full-blown fascism thanks to the government’s response to the Covid-19 pandemic. Told they could no longer so much as ride a subway train bare-faced without a $50 fine, most New Yorkers have simply assumed there are cameras everywhere and dutifully masked up, even when many independently express concerns the whole masking ritual is at best a cultish rite – and at worst an effort to dehumanize one’s fellow man. After all, there are criminals about – a lot of them! – and the boys in blue are keeping us safe when they place their boots on our necks and apply just the right amount of loving pressure.

The lofty battle cry the Bush administration let loose upon sending American soldiers into the 20-year quagmire that Afghanistan would become was that we must ‘get the terrorists,’ lest they rob us of our freedoms. But instead of safeguarding them, American leaders memory-holed those freedoms as quickly as possible – the better to make “our boys” returning from Afghanistan feel right at home. The war is here, and the real terrorists – those in Washington – are already doing their victory dance. Let us hope it’s premature.