The United States has approved the supply of lethal weapons Ukraine 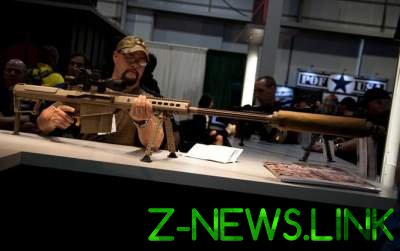 The license is granted for the supply of large-caliber sniper rifle Barrett M107A1.

According to sources, the state Department earlier this month approved a commercial license authorizing the export of large-caliber sniper rifles, Barrett M107A1, as well as ammunition and spare parts in the amount of $41.5 million, the Publication explains that the supply of these weapons “will eliminate a certain vulnerability of the Ukrainian forces fighting Russian-backed separatists” in the two Eastern “republics”.

The newspaper’s sources draw attention to the fact that permission to export more heavy weapons, including portable anti-tank missile systems Javelin, the US authorities are not given.

“I’m glad the administration approved the sale of defensive lethal weapons to Ukraine. This decision was supported by Congress in legislation adopted three years ago, and reflects our commitment to Ukraine in the face of aggression by Russia”, – leads edition of the words of Senator Bob Corker, Republican from Tennessee.

As noted by another source in the administration, trump personally approved the decision to issue a license to sell after he submitted a written decision of the Minister of defense James Mattis and the Secretary of state’s Rex Tillerson.

Experts and officials said that the decision trump was weighed – he did not approve all that was demanded by the Ukrainians, but, nevertheless, approved the first sale of lethal weapons, which is a significant change in the approach of his administration and U.S. policy in General.

“We have crossed the Rubicon, it is a lethal weapon, and I foresee that there will be more,” – said one of the representatives.

The report notes that the police were notified of the leading committees of the Congress on 13 December but did not publish any public statements.