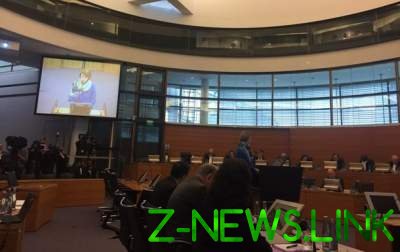 The Russian Federation had violated the basic principle of the immunity of warships, guaranteed by the UN Convention on the law of the sea, said zerkal.

UN international Tribunal for the law of the sea in Hamburg began hearing on the suit of Ukraine on temporary measures against Russia for release of captured Ukrainian sailors and warships. This was reported on the Agency’s website on Friday, may 10, where he began the online broadcast of the meeting.

From Ukraine was made by Deputy foreign Minister Elena zerkal and Professor of international law. The mirror told of the capture of FSB of the Russian Federation of Ukrainian ships and their crews in the sea of Azov on 25 November 2018.

“The dispute between the parties concerns and the ongoing illegal capture and detention of the Russian Federation of the Ukrainian military ships Berdyansk and Dnipropetrovsk, as well as Ukrainian naval vessel Yana tray 25 Nov 2018 in the Black sea. The detainees were not only the ships, but 24 members of their crews. As a result of the seizure and detention Russia has violated the basic principle of the immunity of warships, guaranteed by the UN Convention on the law of the sea,” – said zerkal.

See also:  Groisman told, who will sell the Ukrainian land

According to her, Ukraine has initiated arbitration proceedings under Annex VII to the Convention to receive legal protection from these violations.

“Today we stand before the Tribunal with a request to exercise your right in accordance with part 5 of article 290 of the Convention and to apply provisional measures, given the urgency of the situation” – called mirror.

The diplomat noted that the Ukrainian naval vessels continue to be held by Russia for six months, and in the case of seafarers under investigation, they were in jail “Lefortovo” in Moscow. Serkal called members of the Tribunal, the name of every captured seaman.

She added that Russia’s behavior is a flagrant violation of the UN Convention on the law of the sea and customary international law.

“Immunity of warships is fundamental in the international system. Military ships and personnel can’t be arrested by law enforcement agencies of foreign States and subject to the jurisdiction of foreign courts,” – said zerkal.

In this regard, Ukraine requests the court to apply provisional measures, given the urgent nature of the situation – that Russia immediately release the naval ships of Ukraine and members of their crews and brought them back to Ukraine.