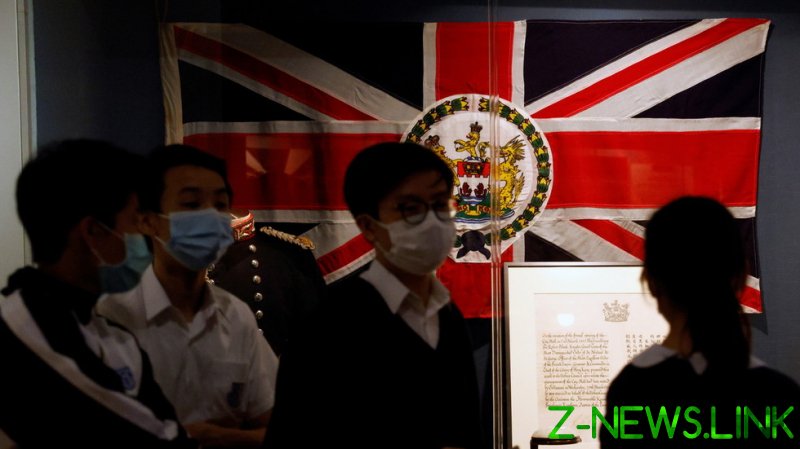 Sunday marks the start of the UK government’s British National Overseas (BNO) scheme for Hong Kongers, giving those in the Chinese city who hold BNO passports the opportunity to move to Britain via a five-year visa, which can become a path to citizenship.

Up to 300,000 residents in the former colony are predicted to leave. Beijing has responded by invalidating the BNO passports, creating a new hoop for passport holders to jump through, which may make it difficult for them to leave Hong Kong. The UK has framed its move with the claim that China has violated the 1985 Sino-British declaration via the imposition of a strict national security law last year, and has portrayed itself as acting out of duty to those in the city.

But as it did with Brexit, Britain is acting based on a nostalgic image of what it once was, as opposed to a realistic depiction of what it now is. The idea of a ‘benevolent Britain’ saving people from ‘oppression’ creates a starry-eyed view of the situation that puts it on a collision course with Beijing, which sees its sovereignty over Hong Kong as the correction of a historic injustice and humiliation imposed on it by London.

This has blinded the UK to the practicalities of the gesture; transforming hundreds of thousands of people into political footballs and inviting them to a country which is encountering severe economic difficulties is really not the act of saviourism that it might appear.

So is it really ‘British benevolence’? Or more a case of ‘British bullying’? The two suggestions illustrate how one situation can be viewed in two very different ways by the respective countries involved.

Britain argues that it has a ‘moral duty’ towards Hong Kong, a colony that was once its own. Therefore, by offering BNO passport holders the right to immigrate, it sustains its self-identity as a benevolent, progressive, global power carrying on the legacy of the empire.

For China, on the other hand, Britain is nothing less than an aggressor which annexed the territory of Hong Kong forcefully and imposed unfair treaties on the country for decades in what is known as its ‘century of humiliation.’

Thus, since 1949, the People’s Republic of China has sought to frame itself as a capable and sovereign nation, and the return of Hong Kong is seen as both rightful and restorative, a correction of past wrongs.

For Britain to still argue it has a stake over this city and a duty to it is perceived as patronizing and arrogant, an overstretch of a dark past which should not be repeated. This has underlined China’s response to all the unrest within the city, culminating in its imposition of the national security law. While the mainstream media has framed the situation as ‘zero-sum oppression,’ Beijing believes the situation in the special administrative region has been exacerbated by foreign influence, and considers this a challenge to its own rightful sovereignty over the city.

But what will the consequences of this passport dispute be? Beijing states it reserves the right to take “further measures” although it is not clear yet what they might be. For Hong Kong BNO passport holders, China’s invalidation of their documents will place an obstacle in the way of them departing the city, even if it does not block it entirely.

It may also make some think twice about the decision to leave; what if, for example, they are not allowed to enter Hong Kong again after their ID cards expire? This could mean separation from their family. After all, a BNO passport is effectively a travel document, and not a citizenship one. It lacks rights, and the path to the UK is one of no-return.

Similarly, those who use these passports to cross the border to mainland China daily for work and business will now find this route has closed down. A BNO passport has become an inconvenience in the city itself. Those bearing them now have to make a choice.

There is also the question of whether the UK is the land of milk and honey it is perceived to be. This is a very unfavourable time to uproot and go to Britain. Covid-19 has been rampant, the economy is sinking, unemployment is high and the consequences of Brexit are further taking their toll on the economy. What opportunities might Hong Kongers have there?

Whilst British people themselves are generally enthusiastic about the incoming wave – possibly viewing them through the rose-tinted lens of British imperial nostalgia – the reality might be somewhat different and more unwelcoming. There is likely to be some racism and xenophobia. To simply pick your entire life up and move halfway around the world can be daunting, even if one feels they have to do it.

Given all this, it seems that Britain arguably hasn’t thought through the consequences of this move. It appears a decision fuelled by imperial nostalgia, and one that doesn’t even try to come to terms with China’s position over the Hong Kong issue. This is a big commitment, and it remains to be seen how it will play out.

One thing, though, is for sure; this move, and Beijing’s retaliation, constitute yet another nail in the coffin of the Sino-British declaration. Britain’s determination to sustain some sovereignty over the region ensures that Hong Kong will never return to the way it was. As those opposed to the mainland depart, the legacy of British rule in the city will fade away and, ironically, its new, Chinese identity will continue to consolidate.