The U.S. plane collided with an unknown object. Video 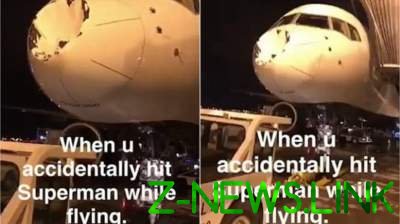 In the USA the plane crashed into an unknown object

During the flight in the plane American basketball team “Oklahoma city thunder”, which was flying from Minneapolis to Chicago, crashed UFO. It left a noticeable dent on the nose of the aircraft.

One of the team members are Stephen Adams, who came on Board during this unexpected incident, after landing, shared photos of the damaged vessel.

See also:  During a military parade in North Korea, the tank lit up. Video

“The flight was, to put it mildly, difficult”, — says the athlete.

Another player Patrick Patterson shared the video with a huge dent in the plane. “When I accidentally crashed into Superman during the flight”, — jokingly commented on the recording Patrick.

In Delta said that it happened due to the fact that the plane likely hit a bird.

See also:  The star of "the Dance" moved to tears a fantastic room. Video