Home / WORLD / The Trump kids have long been in their dad’s shadow… Can one of them really follow in his footsteps and retake the White House? 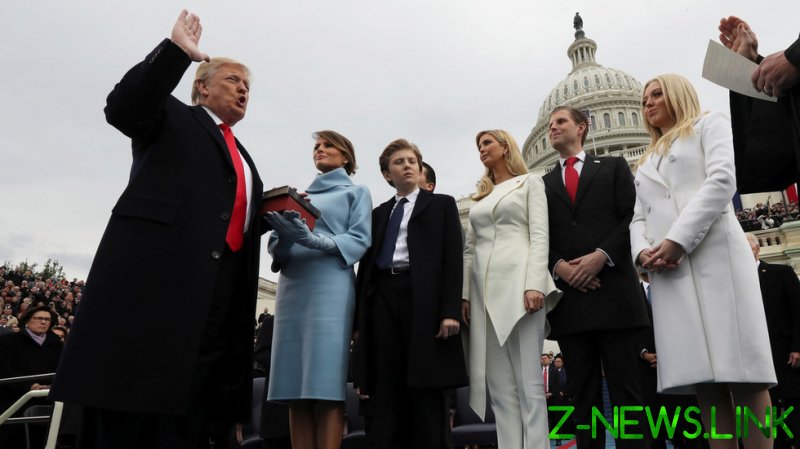 Who’d want to be a Trump kid right now? Their dad, The Donald, has been ejected from the White House, kicking and screaming and tarnishing the family name as he went, and could end up being banned from future office. Or even worse, in jail.

And if daddy can’t hold office or can’t engage in politics because he’s wearing an orange prison jumpsuit, there’s talk that one of these kids will have to step up and carry the Trump political brand forth.

There is, however, a small but not insurmountable problem for Donald Jr., Ivanka, Eric, Tiffany and Barron: to date, none of these kids has shown even the tiniest hint of any kind of real ‘talent’. None of them is exceptional in any way; none of them seems particularly bright.

But, then again, their dad didn’t appear to be especially sharp, either, and he made it all the way to become the 45th president of the most powerful nation on earth. The Donald, though, for some, had charisma, chutzpah, balls… call it what you want.

Yet, his kids don’t appear to have that X factor, do they? None of them has done anything of any real note on their own; so far, they have all fed from the Trump teat.

They do, or the three eldest do at least, seem to have inherited their father’s radiating self-belief, innate self-confidence and a gift for self-promotion. Self, self, self. That’s the key word in the Trump household.

Until fairly recently – January 6, to be precise – the Trump name still conjured up images of skyscrapers and casinos, helicopters and reality TV shows, fake tan and dyed hair, and glitz and glamour. Everything splashed with gold paint. Money, money, money. Somehow Donald Trump WAS the American Dream.

Anyone could, indeed, become president – if they had vast amounts of cash and the sheer brass neck to give it a bash.

Now, the Trump name has been associated with words such as ‘insurrection’ and ‘sedition’ and ‘attempted coup’. It has been associated with images of crazy-looking semi-naked dudes wearing horns on their head, plus a swathe of not very bright people who somehow managed to make it all the way from their trailer parks to the inside of the Capitol building in Washington.

Several banks and companies, New York City and even the PGA golf tour are bailing out of their deals with the Trump brand. And almost a billion dollars in loans will become due in the next few years.

Status-obsessed Ivanka, 39, is the eldest daughter and, for many Trump fans – and they are legion – the front runner to carry the torch forth. She’s often been seen as the apple of her father’s eye, and was at his side as an adviser during his four years in the White House. There had even been talk that her dad was going to appoint her to lead the US at the United Nations.

“Ivanka would be dynamite, but, you know, I would then be accused of nepotism, if you can believe it, right?” Trump said.

Well, of course. And there was also the fact that she wasn’t remotely qualified for the gig. She was only daddy’s little girl. And maybe the word ‘dynamite’ is not the best quality for a diplomat on the world stage. World leaders, as was made painfully obvious during the G20 World Summit in Japan in 2019, had absolutely no time or respect for the first daughter.

It does seem, however, that she could be poised to take a run at the Senate in 2022 and challenge Marco Rubio down in Florida. The Sunshine State is now the Trump family’s main home and mission control. The ex-president opened an office there on Monday.

Donald Jr., 43, is actually the eldest of the clan, but his star has never really shone as brightly as Ivanka’s. Perhaps he made his ambitions clear when he posed in front of a banner that said ‘Don Jr. 2024’, urging him to make a run for the presidency next time around. “This will make the lib heads explode,” he wrote in a caption under the image that he himself posted on Instagram.

Don Jr. has also touted himself as a future mayor of New York City, but even his old man said he “wouldn’t have a chance” of winning… not as a Republican, anyway.

There are some who think that, well, Don Jr. just isn’t very bright. Even a former president of Estonia, Toomas Hendrik Ilves, compared him to an “exceptionally small-brained fish” after Jr. said on Twitter that his dad was the first president in modern history not to start a new war.

Bringing up the rear comes 37-year-old Eric, a weird looking boy, if ever there was one. He shares his dad’s and elder brother’s love for Twitter, tweeting about ‘weak’ Republican leaders after the election: “Our voters will never forget you if your [sic] sheep!”

He’s a fan of his dad’s vast election fraud theory as well as far-right conspiracies such as QAnon, which claims a Satanic, cannibal cult of pedophiles plotted his old man’s downfall. Righto.

That’s the three offspring to his ex-wife Ivana. But then there is also ‘the forgotten daughter’ begotten of Trump’s second wife Marla Maples; 27-year-old Tiffany, named, of course, after the swanky jewellery store Tiffany & Co.. Tiffany Trump has it about right, though; she’s kept a much lower profile and pretty much just luxuriated in her old man’s wealth.

Then comes Barron, son to third wife and former first lady Melania. At only 14, it’s maybe a bit early for the youngest Trump. And Barron has, so far, been largely protected from the Trump glare by his mummy – he didn’t even show up when his parents left the White House. He’s been spotted in an Arsenal soccer shirt and has been rumored to have a taste for video games, anime and K-pop. Barron does not even have social media accounts, the Trump family’s preferred method of communication.

In truth, it all sounds a bit like the HBO show ‘Succession’, in which the four kids of declining patriarch Logan Roy try to position themselves for power within the family firm.

Donald Trump has a huge base, to which most political commentators always refer, often nervously. Almost 75 million Americans did vote for Trump in the election. Will they be loyal to his offspring?

Who knows? But I have a solution that would keep everyone happy. Why don’t y’all move down to Florida? It’s sunny down there. Plus, the home to ‘Scarface’ and ‘Miami Vice’ is a suitably wacky state where this plan just might actually work.

Paint all the lamp posts and the lines down the middle of the road gold and then anoint The Donald as YOUR King. Arise, King Don! And then his offspring can just follow him on to the throne. Like they used to in the old days. Welcome to Florida, the Kingdom of Trump.