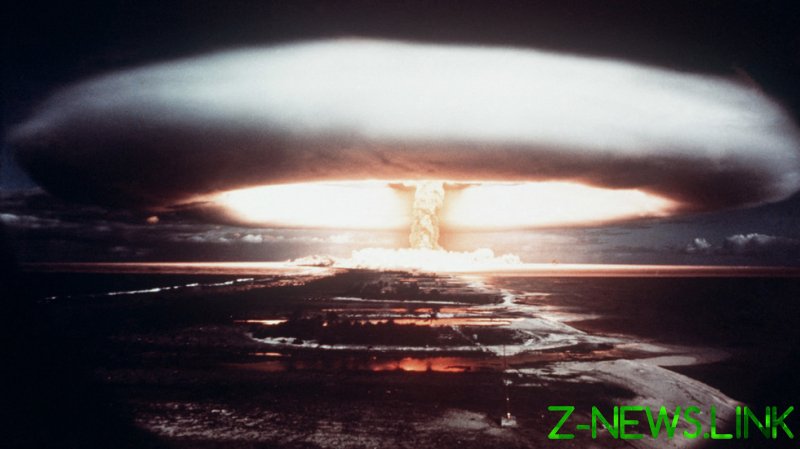 A dust storm originating in the Sahara Desert swept across parts of Spain, France, the UK, and Ireland last month. In addition to bringing a red tinge to the sky, the dust caused a slight, yet noticeable, spike in radiation in the areas it reached. This radiation spike was caused by the presence of cesium-137, a radioactive isotope produced through the nuclear fission of uranium-235 in nuclear weapons. A legacy of French nuclear weapons testing that occurred in Algeria during the 1960s, the cesium-137 contamination is a reminder that while the testing of nuclear weapons may have been halted for the time being, the consequences of these tests live on through the poisoning of the planet mankind calls home.

The Saharan radioactive dust cloud is but the most recent visible phenomenon of a plague that has infected much of the world. Cancer and birth defects can be linked to hundreds of atmospheric nuclear weapons tests conducted by the five so-called “nuclear powers” (the United States, Russia, China, France and the United Kingdom). The secrecy that these states attached–and still attach–to these tests has complicated efforts to obtain a true and accurate account of the human cost associated with nuclear weapons testing. Even the horrific numbers put out by a 1991 study by the International Physicians for the Prevention of Nuclear War (IPPNW), which estimated that the radiation and radioactive materials from atmospheric testing taken in by people caused 430,000 cancer deaths by the year 2000, and predicted that roughly 2.4 million people could eventually die from cancer because of atmospheric testing, is just a guess.

A cancer on the globe

That many of these victims were veterans who were deliberately exposed to the effects of nuclear weapons is neither shocking nor excused. Some 250,000 US military personnel involved in the occupation of the Japanese cities of Hiroshima and Nagasaki were exposed to radiation produced by the two atomic bombs dropped on those cities at the end of World War 2; another 400,000 were exposed to the effects of nuclear weapons over the course of nearly two hundred atmospheric tests that took place between 1946 and 1962. According to a study conducted by the National Cancer Institute and Centers for Disease Control, radioactive fallout from nuclear weapons testing has killed more than 15,000 Americans and caused at least 80,000 cancers. The Department of Veterans Affairs has created a category of veteran, the so-called “Atomic Veteran,” to classify military personnel and their dependents who qualify for compensation if they have been stricken by at least one of 21 presumptive cancers defined by law as being linked to radiation exposure.

Supernova in the East

The Soviet Union, which carried out 137 atmospheric tests of nuclear weapons, took the exposure of military personnel even further, conducting a nuclear test where a bomb the size of those dropped on Japan was detonated within two miles of 45,000 Red Army soldiers dug into defensive fighting positions. This test, conducted on September 14, 1954, in the Ural Mountains about 600 miles southeast of Moscow, finished with these soldiers, most of whom were not wearing any protective equipment, rising from their defensive positions to conduct an assault across the newly nuked landscape, apparently to prove that troops could operate effectively in a nuclear war.

It is not known how many of these soldiers died because of exposure to radiation, but the levels they were subjected to are estimated to be ten times that permitted for an American soldier to experience for an entire year. It is also unknown to what extent similar military exercises were held in relation to nuclear weapons testing nor the total number of Soviet military personnel exposed to the effects of radiation and the long-term health consequences.

Of the five so-called “nuclear powers” (nations whose nuclear arsenals are openly acknowledged and recognized by the nuclear nonproliferation treaty), China operates with the greatest level of secrecy, but we know of nearly two dozen atmospheric tests. While little is known about these tests, some estimates hold that more than 20 million Chinese may have been exposed to radiation, that 194,000 people may have died from acute radiation exposure, and another 1.2 million may have received doses high enough to cause cancer.

That civilians bear the greatest burden of the decades of nuclear weapons testing should not come as a surprise. Even though the nuclear weapons powers will all contend that they went to great lengths to conduct these tests in remote locations, as far from civilian populations as practical, the reality is that the unpredictability and persistence of the radioactive fallout produced from these tests have led to widespread exposures, with deleterious health effects.

In Algeria, it is estimated that between 27,000 to 60,000 people from communities around the French nuclear test sites were exposed to dangerous levels of radiation. More than 110,000 occupants of French Polynesia were exposed to dangerous levels of radiation, including the 80,000 inhabitants of the capital, Papeete, when the highly radioactive cloud from a 1974 atmospheric test drifted over the city. The civilian population was not notified, and no precautions were taken. The number of Australian aboriginal people exposed to radiation from the United Kingdom’s nuclear testing on Australian soil likewise numbers in the many thousands.

The Kazakh region of Semipalatinsk bears similar witness to the dangers of testing. Between 1949 and 1989, 1.5 million residents of the former Soviet oblast of Semipalatinsk were subjected to at least 456 nuclear tests conducted at an 18,000-square-kilometer site known as Semipalatinsk-21. Today, samples taken from the soil and water of the region show a level of radiation more than 10 times the norm. More than half the population has died of cancer before reaching the age of 60, and one in 20 children born in the region has some form of serious deformity. These results are not an aberration, but the norm.

British veterans who were exposed to radiation from nuclear testing were found to have fathered children possessing congenital defects at a rate of 94.2 per thousand births, as compared to 9.6 for non-veterans. And radiation is the gift that keeps on giving–among the grandchildren of these “Atomic Veterans,” the defect rate was 61.4, compared with 7.4 for the grandchildren of those not exposed.

The United States has its own sordid history of nuclear tests gone bad, perhaps the most notorious being the so-called “Dirty Harry” test involving a 32-kiloton weapon that was detonated at the Nevada Test Site on May 19, 1953. Due to a miscalculation in the weather report, accompanied by an unexpected change in wind direction, the explosion generated a highly contaminated fallout cloud which drifted over the town of St. George, in the neighboring state of Utah. The town’s residents were not told to shelter, and school children were playing at morning recess when the radiation began to settle on the town. Radiation counters used to measure the level of contamination maxed out at 300-350 milliroentgens, more than three times the maximum permitted annual rate of exposure. It would be hours before the citizens of St. George were told to take cover.

The impact of the ‘Dirty Harry’ test on the health of St. George’s population is still a matter of dispute, with various legal claims still working their way through the US legal system. But an indication of the deadly potential of exposure to the fallout of this test can be gauged by the experiences of the cast and crew of the Hollywood movie, The Conqueror, filmed on location outside St. George in 1954, a year after the test. The cast and crew spent several weeks on location. By 1980, 91 of the 220 persons involved with the film had developed cancer, of whom 46 died–including the stars of the film, John Wayne and Susan Hayward.

Sometimes it takes the death of a celebrity to shed light on a real and pressing concern that otherwise would escape attention. The fact that a nuclear weapons test may have caused the cancer that killed two American film legends is not known by most US citizens today, let alone the rest of the world. But Susan Hayward and John Wayne’s deaths highlight the reality that radiation poisoning knows no boundary. There is no social status that protects one from the fatal consequences of exposure to radioactive fallout from nuclear testing–it will kill a Kazakh peasant and Pacific islander as easily as a Hollywood legend. The radiation that likely killed John Wayne and Susan Hayward came from a single nuclear weapons test. While the atmospheric testing of nuclear weapons is a thing of the past, the continued utility of nuclear weapons as a so-called “weapon of deterrence” should send alarm bells off around the world. The fact that nations continue to incorporate these weapons into their respective arsenals, and develop a doctrine that envisions their possible use, underscores the fact that people and politicians have lost touch with how utterly awful these weapons are, and why they must never be used again.