Home / Video news / The tourists took the fight of lions and Buffalo in Africa. Video

The tourists took the fight of lions and Buffalo in Africa. Video 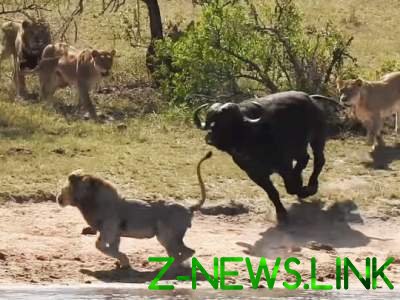 A herd of Buffalo fought off fellow at the pride of lions.

Group of tourists in the famous South African Kruger Park managed to capture on video an extraordinary spectacle – the battle of the buffalos and lions.

So, in early April, the car with the tourists after lunch went to the Transport Dam watering hole large. At the water’s edge in the shade of the trees rested a lion’s pride, and tourists decided to stay and watch – it is known that lions do the hunting. Soon the water went down a herd of Impala, and the raptors gave chase, but antelope briskly rode away (from this moment begins the video).

After the first failure, the lions noticed a large, clearly no longer young Buffalo. Having turned their attention to a new potential victim, the raptors ran after him, driving from different angles. Deciding to escape from the hunters, the Buffalo plunged into the water and swam away, but there was danger on the surface of the water seemed flat jaws of a crocodile. To avoid toothy new threat, the Buffalo had to turn around and re-enter the side, where he lay in wait for the lions.

Realizing that the fight can not be avoided, Buffalo few minutes opposed “to the Royal family of Savannah” alone: he skillfully avoided their shots, and ominously met the bold attack and made in fear to run away from his sharp horns, even the lion heads the pride.

There is no doubt that after some time, the predators would have exhausted their prey, driving it back and forth across the water and attacking from different sides. But came to the aid of an army of fellow Buffalo who finally heard his cries for help – a call make these animals when they are in danger.

See also:  "Waterfall" in the apartment: Kiev outraged by the communal outrage. Video

The lions had to get out, and a huge herd of Buffalo located on the banks of the watering hole. And was the male whom they had saved, from this herd, or was a stranger, unknown.