Home / Incident / The taking of hostages in Kharkov: the attacker has let go of five people

The taking of hostages in Kharkov: the attacker has let go of five people 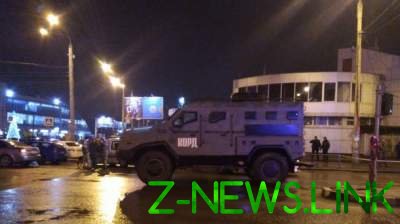 In the Kharkov branch of “Ukrposhta” near the metro station “Kiev”, which captured an armed man managed to bring women and children.

This told the press Secretary of the President of Ukraine Petro Poroshenko Svyatoslav Tsegolko wrote on his Twitter page.

“Only that the head of the SBU reported to the President about the release of 5 hostages in Kharkov. It’s three women and two children,” he wrote.

Other details of the incident Tsigalko not disclosed.

The police in Kharkiv region confirmed information on the release of children and women.

“As of 18:10 the police managed to persuade the attacker to let go of a certain part contained people – 2 children and 3 women. They’re safe now,” he told police.

As told TSN the chief of police in Kharkiv region Oleh Bech who seized the mail man handed the police officers a banner that says “Jesus is God”.

It is also noted that the man got the gun and “bottle-like explosive”.