The super goal of the Ukrainian footballer admired fans. Video 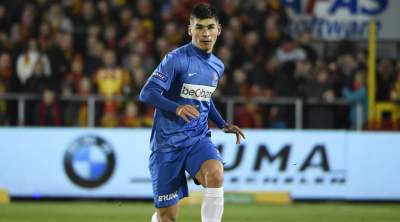 Ruslan Malinovskiy has scored a goal in the opponent’s goal from a zero angle.

The player of the national team Ruslan Malinovskiy has scored a super goal from almost zero angle for your Genk. Media opinion is divided: some praised legionary, others blame the goalkeeper of club Brugge.

Malinowski managed the handlebar hitting almost zero angle from a free kick – this is called “dry leaf”, because of the peculiar trajectory.

Goal was the first in the match, and in the end, “Genk” won with the score 2:0 for “Bruges” this defeat was only the 2nd in this championship of Belgium. However, the “Bruges” is still on the 1st place Genk on 8-th position.

Paying tribute to the skill of Belgian media razvernul discussion on the topic: Ukrainian is so good, or was the place to be a blunder of goalkeeper? The opinions were divided.

NieuwsBlad.to be fully defined, what is recognized in the title:

“Genk” beat club Brugge in such a beautiful goal… or is it the Keeper’s fault?”

See also:  In Russia grooms firmly fought near the registry office for the bride. Video

But a leading sports website of Belgium sport.be not stingy with compliments to the Ukrainian called Ruslana “player of the match”:

“The low level of skill shown by the players club Brugge, where only Nakamba was really good. From Genk was much more players at a good level, especially in the first half. Today Malinowski gets the honor of being named “player of the match” because he opened “Gena” the path to victory, and generally played a good match in midfield”.

Agree with the previous opinion and the official Instagram “Gena”, which is also called Malinovsky “the hero of the match”.