Home / sports / The Super Cup Of Ukraine. “Shakhtar” – “Dynamo”. The announcement of the match

The Super Cup Of Ukraine. “Shakhtar” – “Dynamo”. The announcement of the match 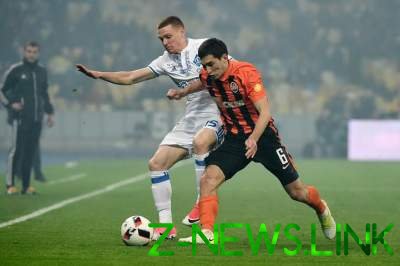 In Odessa the super Cup match between Shakhtar and Dynamo in Ukraine opens a new football season.

For the fifth time in a row the super bowl will dispute unconditional giants of Ukrainian football – the defending champion and the Cup winner Shakhtar and Dynamo, who failed last season to impose the team struggle in the championship and the Cup.

For the new season the teams are the updated lineups – FC Shakhtar parted with Bernard, Fred, Srna and Facundo Ferreyra, signed Moraes, Maicon, Fernando Cipriano, and “Dynamo” has strengthened the composition of the Brazilians che Che and Seleem, but didn’t close staffing problems in the centre of defence and at the point of attack, deciding to do internal reserves.

The Central figure of the match for the super Cup promises to be a Junior Moraes – Brazilian free agent status has decided to take a bold step, moving from Dynamo camp bitter rivals from Donetsk. Kiev has promised Moraes “warm welcome”, and he is clearly eager to upset his former mates and to stake out a place on the edge of Shakhtar’s attacks.

Shakhtar in the super Cup match will not help Tyson, “Dynamo” postponed the debut of the Brazilian defender Sickle. As for the rest, the opening of the season the teams are no staffing problems.