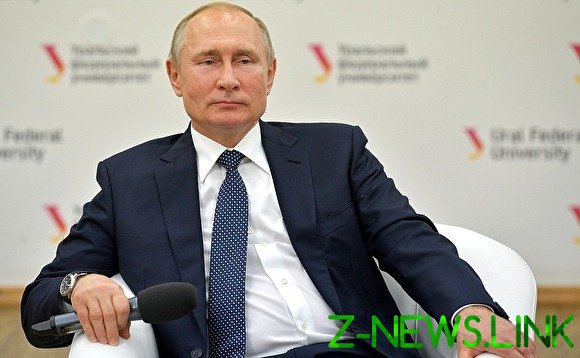 Vladimir Putin supported the proposal of the deputies of the state Duma to impose on Georgia sanctions in connection with the “anti-Russian provocation”. Political analysts believe that the President of the Russian Federation received by all the rules of public policy was not to make a vendetta to ruin relations between the two countries only for the reason of insulting antics of the Georgian journalist. In turn, the parliamentarians took the opportunity to Express the collective loyalists.

“The state Duma showed typical supertitles initiative. They [the deputies] thus curry favor with the Supreme power, want to demonstrate their loyalty. And Putin in this case has demonstrated common sense. That’s all. And now begins the “irreconcilable” struggle of the President and the Duma. But the final word, of course, will be for Putin”, — commented on the situation Znak.com the political scientist Valery Solovey.

The General Director of Institute of regional problems Dmitry Zhuravlev believes that Putin deliberately did not link the sanctions against Georgia, however, that the host Giorgi Gabunia, is no respecter of persons spoke about it on air of TV channel “Rustavi 2”. “The President considered that an insult is not a reason for the total destruction of relations with Georgia. He decided that the preservation of the bridges is more important. No show that the state Duma said one thing and the President another, no. Just the parliamentarians expressed their emotional perception of the situation, stood up for an abusive boyfriend, and this friend showed reasonable calm,” — said Zhuravlev.

A political analyst Georgy Bovt believes that if sanctions in response to abusive rudeness of the leading Georgian TV channel was introduced, many considered them as a personal revenge of President of the Russian Federation, and it would look too small. “And the Russian leader arrived, as they say, “like a man”. In this respect Moscow in the face of the Duma showed that if similar happens again, the us “will not rust”. Russian deputies received another opportunity to make a collective act of the loyalists. And can continue to play the role of “bad COP”, insisting on its recommendation to the President to use at any time the law of contracti”, says Bovt column on the Business FM radio station, adding that Tbilisi should now be able to catch the signal and “start giving back to the most radical behavior of their ultra-nationalists”.

Russian-Georgian relations deteriorated in late June, once in Tbilisi have been anti-Russian protests over the visit of a delegation from the Russian Federation. In response, Russia has imposed restrictions on air travel between the two countries. July 7, live on “Rustavi 2” Giorgi Gabunia, presenter in obscene form insulted Vladimir Putin.

See also:  The US response to the capture of the temple of the UOC-KP in Simferopol

Day 9 July, the state Duma unanimously decided to recommend to the government of Russia to impose sanctions against Georgia because of “anti-Russian provocations” in Tbilisi. It is proposed to prohibit the import of Georgian wines and mineral waters to Russia, and to limit transfers between the two countries. The President of Russia, who on this day was in Yekaterinburg, has opposed sanctions against Georgia. “I wouldn’t do it out of respect for the Georgian people”, — said Vladimir Putin explained that this could complicate relations between the two countries.

Later, the Chairman of the state Duma Vyacheslav Volodin was named an unchanged position of the lower house of Parliament on the need for the imposition of sanctions. “We are their point of view expressed, the President has the right to be heard”, he said.

According to experts, in case of sanctions the loss of Georgia may be on the order of $ 1 billion.