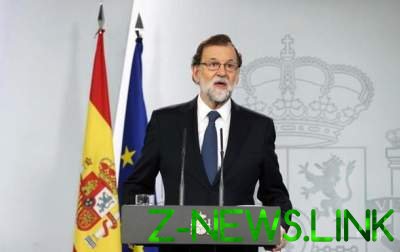 Madrid ready to take Catalonia, even the current partial autonomy.

Prime Minister Mariano Rajoy will not compromise in the conflict over Catalonia’s desire for independence. He said this in an interview with El Pais.

“The government will ensure that any Declaration of independence nor to no avail,” said Rajoy did not rule out the possibility of the dissolution of the regional government of Catalonia.

“I do not exclude anything,” said Rajoy on the question of whether the government of Spain to use article 155 of the Constitution, which allows Madrid to dissolve the regional government and to deprive Catalonia even partial autonomy.

While Rajoy has said he needs “to do everything in the right time.”

“It would be ideal if I didn’t have to resort to drastic measures. The leadership of Catalonia there is still time to back out and prevent a severe reaction of the Central government in Madrid”, stressed Rajoy.

According to him, “the country’s unity is not negotiable” and that Madrid will not negotiate against the backdrop of threats. Mariano Rajoy rejected the possibility of mediation in the conflict with Catalonia and ruled out early elections.

As reported, on October 1, Catalonia held a referendum on independence. According to local authorities, in support of independence have voted more than 90% of voters, but the turnout was only 43%. Later it became known that on 9 October, the Catalan Parliament will discuss the issue of independence.