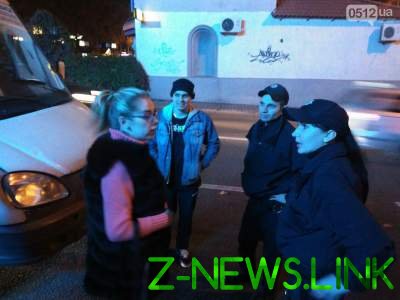 The scandal erupted in Nikolaev.

On Saturday evening, October 28, in the center of Nikolaev at a stop “the Cathedral” the conflict occurred because of the reluctance of the minibus taxi driver No. 1 to adopt the 500-hryvnia bill, which would pay the pregnant girl.

The girl Julia went into the taxi number 1 still on the Avenue of Heroes of Ukraine. At the entrance she tried to pay a bill of 500 UAH, but the driver never adopted, citing a lack of delivery. According to Yulia, in her direction immediately showered with insults and swear words.

Already at the bus stop “Cathedral” the girl was waiting for her husband, who was blocked by “minibus”. As a result, all passengers taxi left the car and went to other taxis.

“You”Nena, get out of here. Fuck you n”her – so he told me. Said. People were sitting and say to him: “Words match”… I’m not free food, I just was required to give change. Similarly, in the stores, you come and say, “I don’t care it’s not my problem, you should give change” Is not normal.”, – emotionally commented the girl.

After exiting the taxi, the girl’s husband called the police who came to the scene 25 minutes later. Around the bus at this time were people, some of whom began to support “marshrutchik” and blame young people in disrupting transport.

See also:  In Ukraine come a thaw and rain

The first time the driver of the car out on the street, but when the bus came a few dissenters “idle” women, he went out and began to accuse the young couple.

“The village girl, gives 500 UAH. Where would I get the same amount? And that’s all. Now she called their leaders and they are here… I’m 45 years behind the wheel… Well, who is, show your ID. Who are you?” – asked the husband of Yulia bus driver.

After the police arrived the altercation did not cease. The patrol was forced to invite all parties to the conflict to the police station.