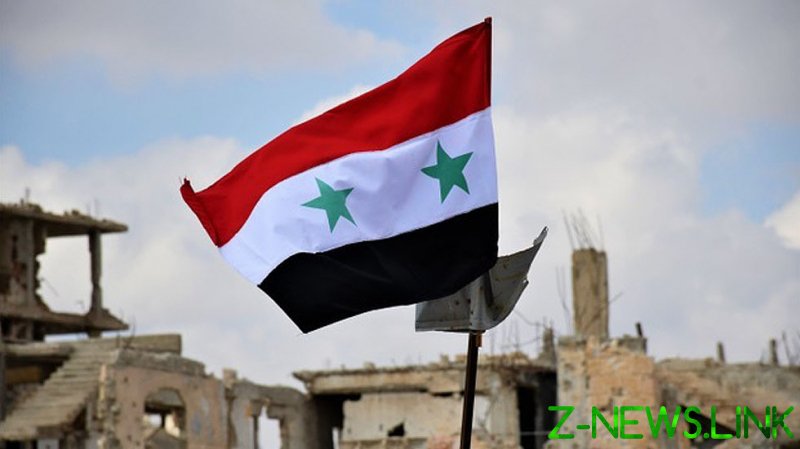 Western media persists in portraying the emergence of extremist armed groups in Daraa, south of Damascus, as the “cradle of the revolution” to overthrow the Syrian government. The reality is that Daraa was the touchpaper lit by hardline Libyan mercenaries imported into the city prior to 2011.

From Daraa, the “revolutionary” flames fanned by the US, UK and Israeli-led coalition headquartered in Jordan, funded by Gulf-state blood money, would engulf Syria for ten long years. In Daraa, the CIA/MI6-backed Muslim Brotherhood extremist gangs fronted the orchestrated uprising, power multiplied by Libyan arms and terrorist factions and given credibility by the colonial media complex spearheaded by the BBC, CNN and Al Jazeera.

In 2018, an uneasy truce was brokered by the Russian reconciliation teams, and the illegal armed groups that remained in Daraa Al Balad, the hub of the violent US-sponsored insurgency, were persuaded to surrender their heavy weapons but allowed to keep their light arms as part of the peace deal. Russia effectively attempted to bring these brutal armed groups into line by absorbing them into Russian-founded and controlled armed divisions. According to armed-group-aligned media outlets, a former Free Syrian Army leader, Ahmed Al-Awda was given command of the 8th Brigade, “a subdivision of the Russian-founded Fifth Corps.”

However, this was perhaps a miscalculation by Russia in its desire to bring fighting on the southern front to a swift conclusion. The armed groups that had committed multiple war crimes and atrocities against Syrian civilians and anti-terrorism armed forces had no intention of relinquishing their campaign of retaliatory crimes against anyone they considered to be loyal to the Syrian government and state. A vicious offensive was unleashed by these extremist gangs formerly associated with terrorist Al Qaeda and ISIS factions in the southern region.

Since mid-2019, even the EU-funded Syrian Observatory for ‘Human Rights’ reported on more than 1,136 attacks and assassinations that claimed the lives of 774 Syrians, including 12 women and 22 children, by gunfire, IED detonations, as well as suicide car and motorcycle attacks. The gangs also fought among themselves, assassinating rival gang leaders and members. In July 2021, civilians including a child were killed and injured when the armed gangs shelled the National Hospital in Daraa, having clearly replenished their heavy-weapons arsenal.

The presence of UK Special Forces in the region was an indication that the armed groups were still being trained in the use of IEDs for anti-government operations by the British – in March 2020, RAF Chinook helicopters based in Cyprus were scrambled to rescue an SAS soldier injured in an IED explosion “deep inside the warzone” in southern Syria.

I met Adham Alkarad, commander of the Engineering and Missile Division of the FSA, in September 2018 after a precarious visit to Daraa, while the ink was not yet dry on the Russian-brokered agreement. Alkarad cornered me as a British journalist, assuming I was sympathetic to the cause, and informed me that they would never capitulate and that, even with light weapons, they would continue their violent US coalition-backed-crusade to topple the Syrian government and to wipe out “loyalists” who condemned the armed group’s presence in Daraa.

Alkarad told me back then that the protests would continue and that he would contact the BBC and CNN directly to elicit their coverage and support. Alkarad designed the 500kg Omar Rocket that caused horrifying damage to civilian infrastructure and military targets during the reign of terror in Daraa. Alkarad was himself assassinated by unknown gunmen in October 2020.

After months of negotiations, siege and military clashes between Damascus and the armed groups in Daraa, a final ceasefire was achieved on August 31, with Russia taking a less prominent role in the settlement. One week before this agreement was reached, King Abdullah II of Jordan had met with President Putin in Moscow to prioritise the resolution of the Daraa security issues.

On September 9, Russia’s Foreign Minister Sergey Lavrov explained the agreement brokered to resolve the Daraa province tensions. It is interesting that this explanation was given during a joint press conference with Israeli Minister for Foreign Affairs, Yair Lapid. The original 2018 Russian deal with the armed groups had offered Israel guarantees that Iran and Hezbollah would be kept a safe distance from Israeli borders with Syria.

Lavrov effectively announced that the province would be handed back to the legitimate Syrian Arab Army forces and that extremist militants should again surrender their heavy weapons. Negotiations were underway about the withdrawal destination for the armed groups, as their remaining in Daraa was “unlikely.”

This is a blow for Israel, whose continued violations of Lebanese airspace and unlawful aggression against Syria have been largely unimpeded by retaliatory armed response and barely reported-on by the Western corporate media. This might change with Damascus back in the southern driving seat and the shift in power that will almost certainly open the door to an Iranian and Hezbollah military presence closer to the Israel/Syria borders as a deterrent against Israeli offensives. 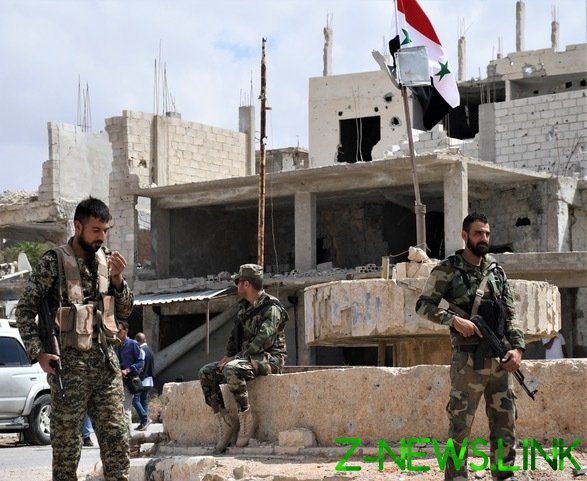 Certainly, when I entered Daraa Al Balad on September 12, we saw Russian and Syrian flags flying side by side, but in the square itself it was the Syrian flag that took pride of place. From conversations that I had with civilians, it was clear the ‘peace’ was still raw and volatile. Syrian soldiers from the 15th Division spoke to me about the prospects for lasting resolution and were optimistic. A flare-up between armed group members and Syrian soldiers was defused respectfully while we were there. Children I spoke to told me they were glad to be finally going back to school. It is too early to predict the outcome of this agreement, but it is clear that there will be no compromise over Daraa and its surrounding countryside being back under the control of Damascus and the Syrian military until peace is fully restored and relations normalised between state and citizenry.

What does this power shift mean for Damascus and the US Coalition including Israel?

It is important to review the Daraa events in the context of emerging geopolitical alliances and concessions, in order to grasp the significance of what has just happened in southern Syria.

On September 13, the Israeli Prime Minister, Naftali Bennet, visited Egypt for the first time in a decade, ostensibly to discuss Israel/Palestine relations with President Abdel Fatah Al-Sisi. Egypt is moving towards normalisation of relations with Turkey, strained since the toppling of Muslim Brotherhood’s man in Cairo, President Mohammed Mursi, in 2013. The Egyptian Consul General in Damascus has intimated that conditions for a full recovery of Egyptian-Turkish bilateral relations is the withdrawal of Turkey from Syrian territory.

Perhaps the most significant concession to Damascus in the aftermath of Daraa has been made by the US itself. Desperate to avoid Hezbollah being hailed as the champion of the Lebanese people after they secured oil supplies from Iran via Syria, the US Ambassador to Lebanon intervened to partially lift sanctions on Syria in order to facilitate the transfer of natural gas and electricity from Egypt to Lebanon via pipelines between Jordan and southern Syria. Parts of the pipelines in Syria are in need of repair as they traverse Daraa towards Homs and then to Tripoli in northern Lebanon.

This not only informs us why Daraa was pivotal to US energy and resource-theft plans in Syria, but also shows us the intelligence of the Damascus moves to secure Daraa at this pivotal point in the regional chess game. The US has had its hand forced by a nation that has resisted its proxy military intervention for ten years and by Syria’s most steadfast allies in Lebanon.

Jordan has for some time been trying to break free of its colonial chains and to normalise trade relations with neighbouring Syria. The breakthrough came in September 2021, when Syria was included in a four-way meeting hosted by Jordan and including Lebanon and Egypt, to focus on the logistics of Egyptian gas and electricity supply to energy-deprived Lebanon. This was the first visit of Syrian officials to Jordan since 2011–- the start of the dirty CIA/MI6-led war against Syria.

The final blow to US Coalition and Israeli/Turkish neocolonialist agendas in Syria came with the President Assad, President Putin summit on September 16 in Moscow. During a 90-minute closed session, the two leaders discussed military, political and economic priorities that included the Daraa province return to Syrian state control and the potential full and final liberation of Idlib in the north-west from Turkish direct and proxy terrorist occupation.

This summit, and the Syrian/Russian slamming of both Turkish and US illegal occupation and annexation of Syrian territory, does not bode well for the NATO member state regime-change project that has been an expensive, abject failure since its initiation in 2011.

The consequences of the Daraa resolution will be far-reaching for Israel, Turkey and the CIA/MI6 project to control the Syrian central economic hub in the Middle East. Damascus, Russia, Iran and Hezbollah have stolen the march on their enemies, despite the pressure Syria is under from the multi-spectrum war waged against it for ten years and it remains to be seen how the US Coalition will try to scramble back from this ignominious defeat and avoid admitting they have been forced to take a first step in normalising relations with President Assad.