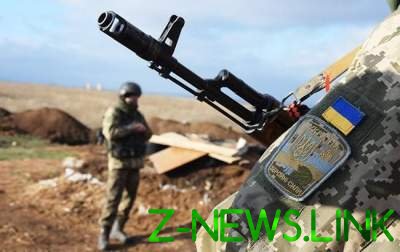 Fighters of 7 times fired at the Ukrainian military

In the area of environmental protection at the Donbass on Friday, may 10, there were no losses among Ukrainian servicemen. About it reports a press-the centre of operations of the combined forces in his Facebook.

Since the beginning of the day, the enemy seven times violated the ceasefire. Armed forces of Russian Federation opened fire at positions of the Ukrainian troops from artillery systems of 122 mm calibre, mortars of calibers of 120 and 82 mm grenade launchers of various systems, heavy machine guns and small arms.

Thus, in the area of responsibility of tactical group “East” the enemy fired three positions of the United forces:
twice from mortars caliber 82 mm, hand-held antitank grenade launchers and small arms near the village of novomykhailivka;
from the automatic easel grenade launchers around the city of Avdeevka.

In the area of responsibility of tactical group “the North” the militants fired at the Ukrainian positions four times:

“Losses among the military personnel of the joint forces there. On a hostile provocation division of the United forces gave an adequate response. Enemy losses are specified”, – stated in the message.