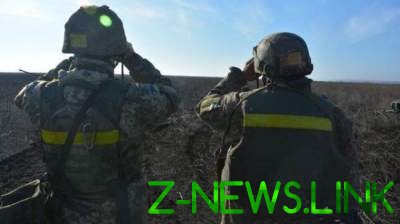 According to intelligence reports, one invader destroyed, six were injured.

On the last day, August 12, opponent 57 times opened fire on positions of Ukrainian military in the Donbass, including 12 times with heavy weapons.

Russian occupation troops were aimed fire from rocket-propelled grenades, heavy machine guns and small arms, and on separate directions – from APCS, the press center of OOS on the page in Facebook. “As a result of fighting two combined forces were injured”, – stated in the message.

Within the current day fighters of the Russian occupation forces 8 times opened fire on positions of fighters OOS. One serviceman of VSU was wounded.

“According to the survey, one invader destroyed, six more got wounds”, – said in the headquarters operations of joint forces. As UNIAN reported earlier, in the temporarily occupied territories of Donetsk and Lugansk regions observers hmm OSCE found dozens of tanks and artillery systems deployed outside certain areas of diversion and means of defense and electronic warfare.