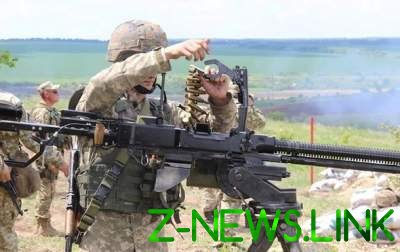 According to the Ukrainian intelligence, retaliatory fire three separatist were killed, one wounded.

Over the past day units of the separatists in the Donbass 18 times opened fire on positions of Armed forces of Ukraine. Heavy weapons were not applied. Wounded one soldier.

This reports the press center of the headquarters Operations of joint forces (EP) in morning Bulletin on Friday, July 20.

The enemy was active in all directions and were aimed fire on the defenders of the Crimean, Yellow, Luhansk, Svetlodarsk, Maori, Avdeevka, Sands, Heaters, Novotroitsk, Novomikhailovka, Lebedinsky, Hnutove, Shirokino and Water.

“The provocative actions of the invaders tried to force combined forces to open fire in order to accuse Ukraine of violating the armistice,” – said in the headquarters.

According to the Ukrainian intelligence, the three separatists were killed and one wounded.

Also during the current day, gunmen opened fire on positions of the Ukrainian defenders at Shirokino and Water. Due to the sighting of enemy fire, one soldier was wounded.