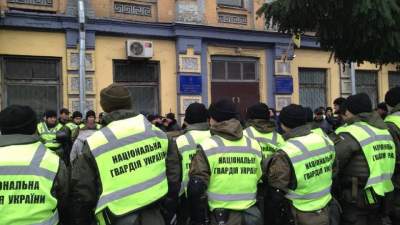 The activists were taken to court.

In Kiev, the police detained 30 people who were involved in the unrest in the building of the Svyatoshinsky district court of Kyiv.

There, the court chooses a measure of restraint for the commander of the volunteer battalion OUN Nikolay Kohanivsky, who was arrested on 21 October for shooting on a “campus” battalion commander “One” with the call sign of REM.

The Kohanivsky brought to another room Sviatoshynsky district court of Kiev for election of a measure of restraint. He was placed in a cage.

Activists detained in the room Sviatoshynsky district court, was taken from the court.

Earlier it was reported that security forces used tear gas, cleared the barricades and the court room. The whole area in the hall and around the building surrounded by militiamen.

See also:  In Kiev for six months will close the funicular

The police documents the consequences of the pogrom. Opened a criminal case. He Kohanivsky meanwhile, said he was willing to answer in accordance with the law for his shootout with Ruslan Camalou.