Home / business / The scandal around the military unit in Odessa: new details

The scandal around the military unit in Odessa: new details 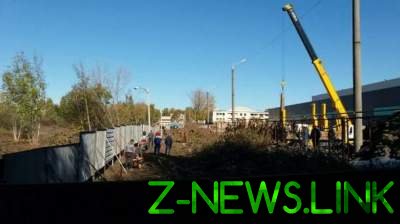 Continue “dismantling” around military units А3571 in Odessa, where today unknown demolished part of the fence and conduct any works, referring to the permits of the Odessa city Council. This was reported in command of Air forces of Armed forces of Ukraine.

“The question to the developers about how on what basis they commit wrongful acts and change the border of the military camp, they said that they have the relevant decision of the Odessa city Council. But the solution they provided and offered to contact the National police to request that they are willing to provide these solutions,” – said the head of the southern territorial legal Department of the Ministry of defence of Ukraine Yury Dobrov.

See also:  Poroshenko urged Serbia to recognize the Holodomor as genocide of the Ukrainian people

In command of the armed forces of Ukraine stated that after they receive documents of the “builders”, the Agency intends to file a lawsuit and the statement in law enforcement bodies.

How did the local police, the area where the incident occurred, does not belong to the military, and no one entrepreneur who has the relevant documents.

See also:  A scandal all over Europe: Polish MEP said that "women are weaker, smaller and dumber"

Earlier it was reported that near one of military units of the Armed forces of Ukraine which is deployed in Odessa region detained the suspicious citizen. As the press service of the General staff of the APU, the man was conducting surveillance of military target.