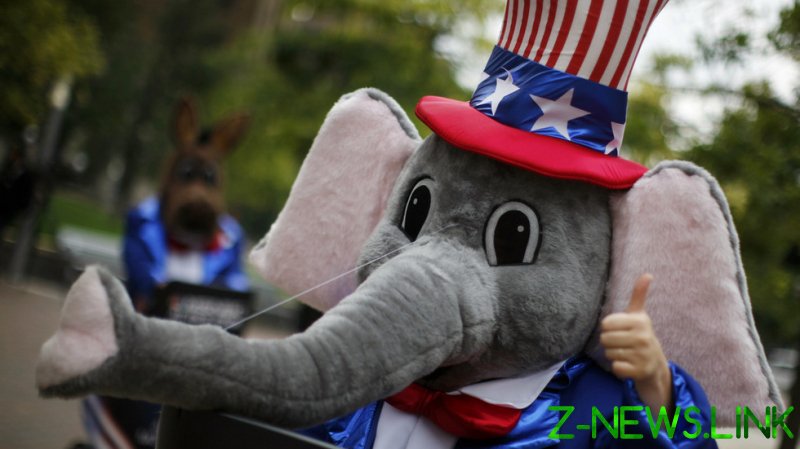 Hating former president Donald Trump isn’t enough. The Democrats already have that huge market cornered. In fact, it’s just about the only unifying principle that holds together the Dems’ disparate coalition of special interests and freak shows. So what kind of coalition might the approximately 120 Republican officials who met via Zoom last week to discuss a possible third-party launch be able to string together?

It might look something like a Skull & Bones alumni gathering – a roomful of globalist backstabbers, spooks and private-equity guys who could sit around commiserating about the good old days working under George Bush I and George Bush II. They could watch waterboarding videos and tell jokes about yellowcake uranium.

This new party’s base would have plenty of common interests: keeping the borders open to illegal immigration; starting regime-change wars across the globe; sneaking more GMO corn back into the food supply; and finding or creating pretexts to whittle away Americans’ civil liberties. But how large a room could those supporters fill?

It used to be that Republicans could get elected promising to do what their voters wanted – pretty much the opposite of the Skull & Bones platform – while doing what their big-money donors demanded. Keep the boot of illegal-alien labor on the throats of wage earners, support bogus wars, move blue-collar jobs overseas, and keep the masses distracted by playing left-right theater with Democrats on manufactured social issues.

But Trump changed all that. He vowed to actually represent the interests of Americans at large. For all his faults, he exposed the neocons in both major parties like never before. The big-money donors moved on. The Democrats and President Joe Biden now have that market cornered, too.

What’s a breakaway GOP leader to do in this environment? Former US representative Charlie Dent (R-Pennsylvania) might brag that he had a 95 percent rating for voting correctly with the US Chamber of Commerce and ranked as one of the most moderate Republicans in the House. He was so willing to throw civil liberties under the bus that he called for the State Department to strip the US citizenship of American-born imam Anwar al-Awlaki.

The Obama-Biden administration did him two better. They not only had al-Awlaki executed in a 2011 drone strike in Yemen – the first extra-judicial killing of an American citizen ordered by a US president – but followed up two weeks later by killing al-Awlaki’s 16-year-old son, also American-born, in another drone strike. And Biden has gotten much of the Obama-Biden team back together for his new administration.

You want senseless warmongering? Check. Drone strikes on wedding parties? These are the experts. Floods of foreign workers to take the jobs of Americans at steep discounts? Gotcha. A dumbed-down, manipulable population? Nobody does it better.

This proposed new party has nothing to offer that anyone wants or needs to buy. Therein lies the problem that brought us to this point in the first place.

The disenfranchised GOP establishment wants largely the same things as the Democrat establishment. They have little or nothing to offer the masses of Republican voters on whom they used to feed.

That’s why in the wake of Trump’s election defeat, the anti-Trump Republicans faced a crossroads. They could try to break Trump’s stranglehold on the GOP and reform the party back into something more like its Bush-era image. They could form a new party. Or they could try to influence Democrats and work with them to govern more toward the center.

The ship has sailed on retaking the Republican Party. Trump won’t likely be convicted in his Senate impeachment trial, as not enough Republicans could be emboldened to turn against him. After flirting with the idea of forming a new party himself, he will instead remain a GOP force by endorsing the candidates he favors and opposing those he dislikes.

Forming a new party is the most absurd option of them all. As delusional as some of them appear to be, they won’t possibly find enough political encouragement to take the plunge. The co-host of last week’s meeting, Evan McMullin, has already seen one measure of public support for his ideas. He’s an alumnus of both the CIA and Goldman Sachs, and yet still has the temerity to urge Republicans to “recommit to truth, reason and founding ideals.” When he ran for president in 2016 as an independent, he won 0.5 percent of the vote.

The remaining option is to work with Democrat neocons, which is what the anti-Trump Republicans have already begun to do. They helped Democrats win last month’s Senate runoff elections in Georgia, giving Biden’s party control of the Senate. The anti-Trump Lincoln Project allied with race-baiters to help ensure that Republicans wouldn’t be able to block Biden’s agenda.

The same group is focused largely now on lobbying Republican senators to help convict Trump and oust a president who’s no longer president. But the Lincoln Project’s credibility has been damaged in recent weeks by scandals, including allegations that co-founder John Weaver, who left the group last month, had been sending explicit text messages to young men for years, offering jobs and other benefits for sexual favors. The group denied knowing about Weaver’s behavior, calling him “a predator, liar and an abuser,” then claimed that another co-founder, Jennifer Horn, left because of contract disputes. Horn actually cited Weaver’s behavior and differences over the Lincoln Project’s future strategy.

When Lincoln Project executive director Fred Wellman bashed Fox News host Tucker Carlson as “a deeply evil man” for daring to challenge the Democrat narrative on the Capitol riot, Donald Trump Jr. exploited the scandal. “What’s truly ‘deeply evil’ is the predator-pedophile projection network at the Lincoln Project covering up the John Weaver story for months and then gaslighting the public with lies about how you had no idea what he was doing,” Trump Jr. tweeted on Thursday.

No, these aren’t the leaders to restore “truth, reason and founding ideals.” The only real solution would be offering a better version of what President Trump pledged – but largely failed – to achieve: serving the interests of the American people. The 74 million Trump voters who are now being smeared as domestic terrorists are a base without a party. Most “flyover-country” Americans saw Trump’s shortcomings, but he had one virtue that none of the establishment politicians could offer: He didn’t hate them.

The breakaway Republicans can’t say that. They governed for years against the interests of rank-and-file Americans. Like a CNN host or a French waiter, they could hardly hide their contempt for Joe Sixpack.

I’m reminded of reports of how top aides to former president George W. Bush relied on evangelical Christians to get him elected, then snickered about them behind their backs. A former Bush administration official wrote that Christian leaders “received hugs and smiles in person and then were dismissed behind their backs and described as ridiculous, out of control and just plain goofy.”

Rather than having their political come-to-Jesus moment, becoming a party truly devoted to working-class Americans, establishment Republicans are splintering into irrelevance.