The sad story of Ellen/Elliot Page: From Hollywood glamour queen to trans-activist oddity 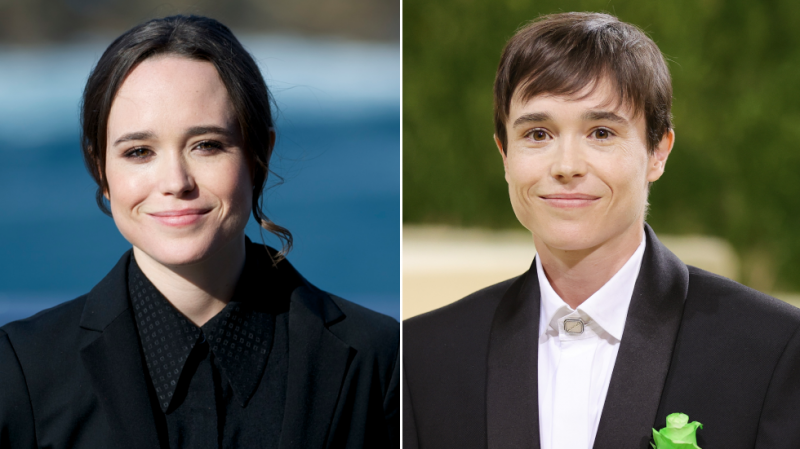 Ellen (Elliot) Page made a recent appearance at the Met Gala, seemingly fully transformed from her former identity of attractive female starlet into that of a mawkish boy-band tryout.

Page, 34, who is famous for appearing in such films as ‘X-Men’, ‘Juno’, and ‘Inception’ as a woman, recently came out as transgender and now identifies as a man. This follows a gradual and all-too-predictable series of political revelations that Page has espoused over the years, following a not-uncommon pattern of woke social-justice acts, which seem only to be exemplified by the strains of celebrity life.

According to Wikipedia, the first indications appeared in 2008, when Page began describing herself as a pro-choice feminist, and was later revealed to be a vegan and animal-rights activist. Also outing herself as a passionate ‘atheist’, she notably remarked that religion “has always been used for beautiful things, and also as a way to justify discrimination.” This is by now an extremely typical pattern of thought for a young imbiber of Western mainstream media and consciousness.

The laundry list of topical right-on causes continued: in 2014, Page came out as gay during a speech at a Human Rights Campaign conference in Las Vegas. At the height of the #MeToo era, in lengthy Facebook posts, she lavished praise on those who spoke out about sexual abuse. By 2018, she had married another woman, choreographer Emma Portner, who had caught her eye on Instagram, though they divorced in 2021.

Page announced on her various social media accounts in late 2020 that she was, in fact, a man, and that, from then on, his pronouns were ‘he/him’ and ‘they/them’. Ever news-cycle-topical, he claimed this decision was in part “inspired by Covid-19” and by “anti-trans sentiment in news and politics.”

Of course, we don’t know what’s going in Page’s mind, or what exactly has driven the actor to take this step, including undergoing chest surgery. He told Time magazine that he was nine years old when he first “felt like a boy” and that he had wanted to be a boy. “I would ask my mom if I could be someday,” he said.

But it’s that final entry in the list of hot-topic activism, the “anti-trans sentiment” reference, that seems to prove my theory that the act was political, or at least politically inspired. It can be hard to believe that someone would do this to themselves simply as the result of media brainwashing, or for attention-seeking reasons, yet the pattern is plain to see. A strange desperation to be seen as a social justice activist led this poor girl down a gender-defying rabbit hole, resulting in delusion, an unnecessary double mastectomy, and a desire to propagandize her story and beliefs to other impressionable young people.

It may be hard to understand how the faddish and ever-changing nature of woke causes could actually lead someone to commit this kind of self-negation of their past self and future, but we can see that, for some people, social media’s ‘talking head of authority’ can be like the very voice of God. For some people, irrational political principles can steamroll over any tradition, relationship, physical revulsion, or even healthy or long-term self-interest.

If you can wrap your cause, or your revolutionary idea, in a package of unfairness or oppression, via selective use of language, then the soft-hearted will often be entranced and led like children behind the Pied Piper. Yet it remains a trickery of selective wording, as every belief is a two-sided coin.

Page may have cut off his breasts, but he will never be a man. He does not remotely resemble one, for a start. Many women who pursue female-to-male transition seem to think being masculine means emulating a teenage Justin Bieber or some kind of sideways-hatted early 2000s NSYNC fan. I have not the slightest doubt that Elliot feels no real desire whatsoever to chop wood or listen to death metal while fixing her car engine. She won’t be getting drunk and asking her pals to punch her in the stomach on purpose. She will never sit through a documentary on how to make bricks or ball bearings. I get that not all men enjoy doing these sorts of things, and that a minority of women enjoy some if not all of them, but you get my point.

Sadly, Elliot has become a weedy pantomime of a man – not even successfully genderless, but entirely like a girl with mental problems. He is, of course, not alone. This is the by-product of America’s slow train wreck, this modern Western-empire circus sideshow, where needy child-celebrity figures will commit a kind of public death-by-wokeness or, more specifically, a partial-suicide-by-wokeness. Page will never really be considered as a man, despite the system publicly affirming his delusion – it will all be mere lip service. He will simply be this oddity that gets dragged out and photographed now and then, like a cripplingly shy cousin at a family dinner.

It is not for his sake that the media machine will catalogue his appearance at award shows and entertainment news. They will do so partially as sideshow clickbait, and partially to perform a kind of public torture. Not of Page, who is his own worst enemy, but to make everyone witnessing his story feel depressed and hopeless, and to tout the unstoppable power of the woke political media machine to do this to anyone, anywhere.