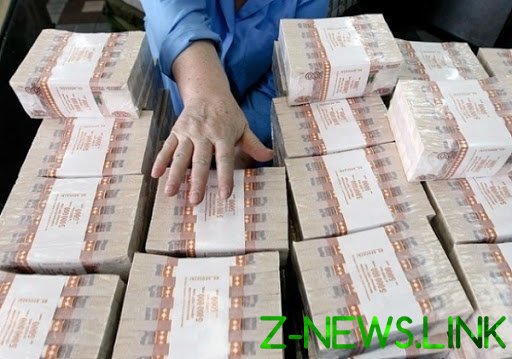 The Bank of Russia continues to pour ruble liquidity in the largest banks of the country, faced with unprecedented demand for cash. Last week, another Bank of eleven assigned to the Central Bank “systemically important”, asked for an irrevocable line of credit to the Central Bank.

This tool works in 2016 and helps banks comply with the liquidity coverage ratio, requiring that highly liquid assets (i.e. those that can be easily sold or converted into cash) at 100% would cover the expected outflow of funds from the Bank within the next 30 days.

The total limit on these transactions, essentially representing a monetary emission to cover the outflow of client money, has been upgraded from 1.5 to 5 trillion rubles as of April 1 and their value is reduced from 0.5% to 0.15%.

In the beginning of the month for an irrevocable credit of 500 billion rubles was converted savings Bank. Last week another credit institution opened the line for a maximum amount of 30 billion rubles, said the Central Bank in the review of the “Financial pulse”.

Central Bank pours money into the banking system, as if into a sieve from which the money flow in the form of cash desks and ATMs.

According to the Bank, since the beginning of March, the cash money supply uvelichilos 10 times more than all of last year in the appeal was issued almost a trillion rubles of cash. That’s 200 tons of 5-thousandths bills and 1,000 tonnes of banknotes one thousand rubles (weighing about 1 g each). 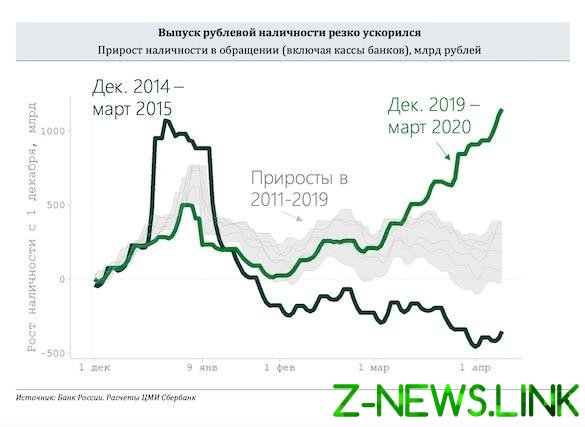 “People feared that quarantine period, banks will not be available, so you need oreshitsa. Just like people bought buckwheat, stocked products, and the money was removed,” said Bloomberg analyst of Raiffeisenbank Denis Poryvai.

The amount of “cache” in the address seasonal increases in December, when people receive the 13th salary and actively spend. The rest of the year, the supply of cash does not vary more than 300-400 billion rubles a month. Leap that the statistics of the Central Bank was recorded in March, “has more historical norms”, analysts of the CYI Sberbank.

According to the Bank, individuals actively shut deposits from 15 to 25 March, apostleship account to 616 billion. After President Vladimir Putin announced the introduction of tax on deposits, the pilgrimage of investors accelerated, and the Association of Russian banks (ADB) has warned the Central Bank about the threat of “a run on the banks”, the first signs of which, according to bankers, already become visible.

The quarantine has slowed the process: last week of March, the deposits according to the Bank, rose 0.5%.

The tax on contributions obviously reduces the incentive to keep their savings in simple Bank products, says chief economist at Alfa Bank Natalia Orlov, in other circumstances, the money could go into investments in the financial market, but given the sharp fall in stock indices in Russia and in the world, it is clear that few people decided on this.